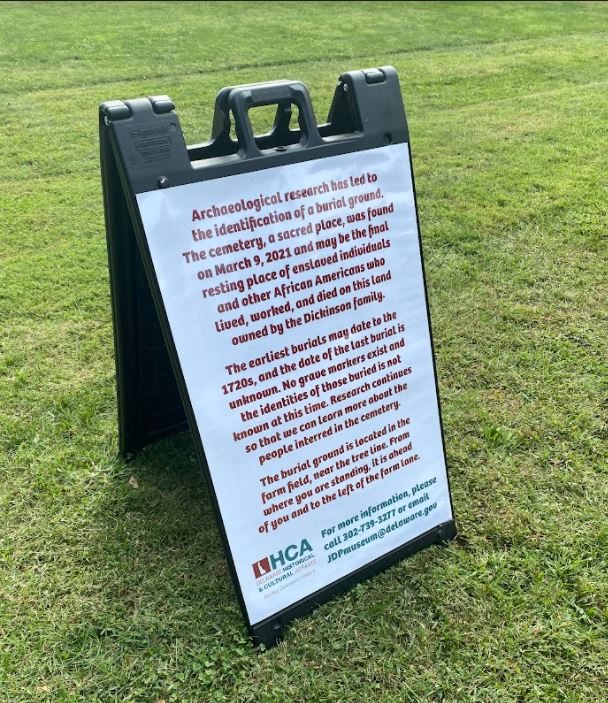 A sign in a field at the John Dickinson Plantation details the discovery of slave burial sites there. Photo by Charlie Megginson.

A burial ground believed to contain the remains of enslaved people and others who lived, worked and died on the John Dickinson Plantation in Dover was found during archeological fieldwork in March.

The historical site is now offering a series of guided visitations to allow guests to engage with guides about the complex history of the property and its namesake owner.

The burial ground is believed to be the final resting place for enslaved, indentured and free Black men, women and children who died on the plantation.

The 1 ½ hour experience includes an orientation in the visitor center, a tour of the recreated log’d dwelling that demonstrates how enslaved and indentured people on the property would have lived, and a mile round-trip walk to and from the burial ground, which includes a moment of silence.

During the walk, visitors pass by the grave of Samuel Dickinson, John Dickinson’s father. His grave is marked, surrounded by an ornamental brick wall and landscaping — a stark contrast to the unmarked gravesite where the property’s enslaved and indentured workers were buried.

The gravesite is in the middle of a barley field leased to a farmer by the Division of Historical and Cultural Affairs. Visitors are not permitted to photograph the site.

While continued research is underway, museum officials say the next step is to surface the walking trail to the burial grounds and engage the community on how best to memorialize the individuals interred at the site.

“This is sacred ground for Delaware, and we will continue to treat it with the honor and respect it deserves,” said Tim Slavin, director of the Division of Historical and Cultural Affairs.  “Our path forward is to protect the site, engage with the community about how to proceed, and continue to learn more through research and dialogue.” 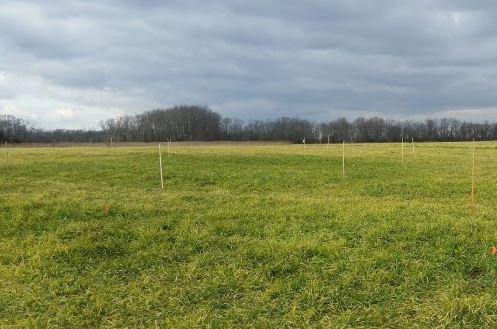 Archeological studies have found burial sites of slaves at the John Dickinson Plantation in this field behind the house.

The plantation is the boyhood home of John Dickinson, a Founding Father of the United States and a framer and signer of the U.S. Constitution. Dickinson lived on the property between the ages of 8 and 18, but continued to own and lease the property to tenant farmers throughout his life.

He enslaved people who tended to the property, though in 1777 he conditionally manumitted most of the enslaved African Americans working for him, providing they work an additional 21 years. Eventually, in 1786 he unconditionally freed them all.

That wasn’t the end of slavery at the Dickinson Plantation, however.

Dickinson’s tenant farmers continued to own enslaved laborers at the property even after his death. His brother, who also lived on the property, also owned enslaved people.

For two years, the Department of State’s Division of Historical and Cultural Affairs has undertaken archaeological investigations on the 450 acres of state property. 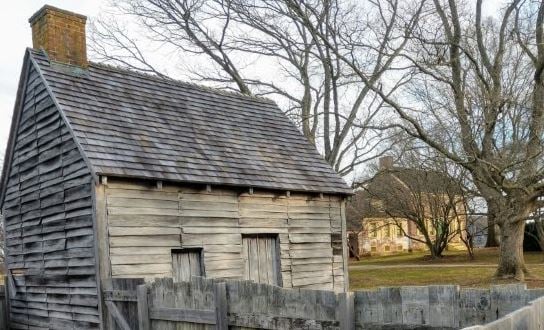 A recreated log’d house on the John Dickinson Plantation is designed to show how enslaved and indentured people lived.

“We remain committed to telling inclusive history,” said Delaware Secretary of State Jeff Bullock. “This includes restoring dignity to those who have been forgotten.  This important discovery presents a powerful moment for every Delawarean.”

While continued research is underway, museum officials say the next step is to surface the walking trail to the burial grounds and engage the community on how best to memorialize the individuals interred at the site.

Due to limited capacity, reservations are strongly recommended and can be made by calling (302) 739-3277.