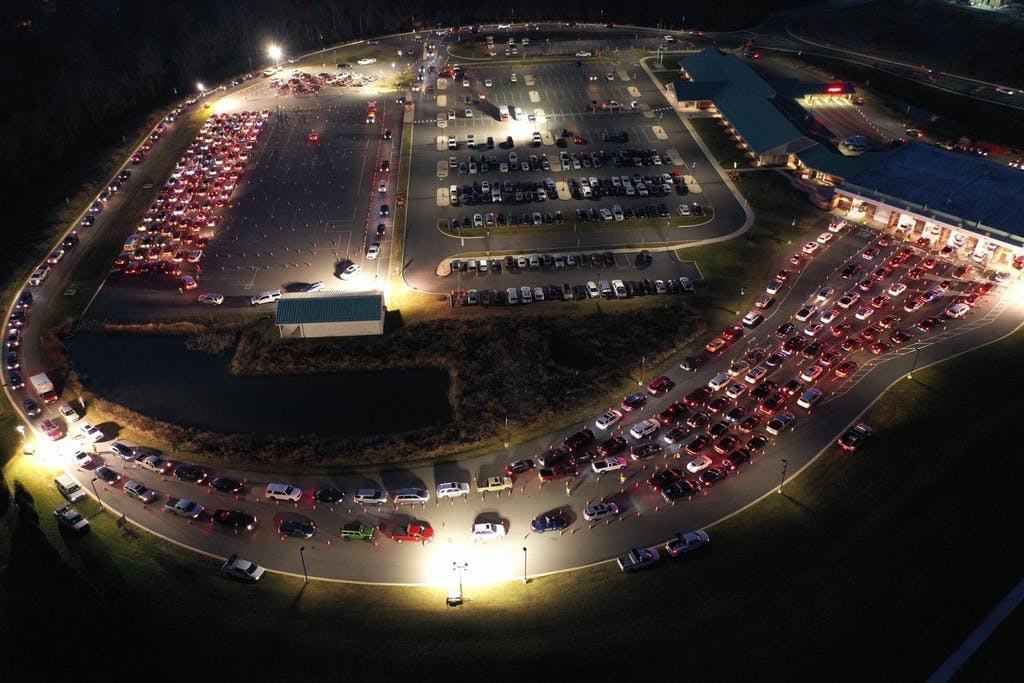 Drivers line up for a drive-thru mass vaccination Tuesday night at the Delaware City DMV.

It looks like a frozen moment from a night-time race around a Nascar track, without stands of fans.

The photo and post is meant to underline the state’s determination to do a COVID-19 “vaccine sprint” to inoculate  as many people as possible in the 1a healthcare worker and first responder category before moving on.

Senior citizens and others are in the 1b segment expected to overlap with the end of 1a.

People who were in the line Tuesday night praised the event’s efficiency. Naysayers questioned many aspect of the event. Some people suggested we should have mass vaccinations running around the clock. One even suggested asking a fast food restaurant for help.

“24-7 Yes,” wrote Dave McGuigan. “Everyday that we delay is another day more seniors will die. This is war.”
“We have a friend that was in that line,” wrote Judy Campbell. “He was VERY impressed as to how organized and smoothly the process was. He also commented that he didn’t even feel the needle go in.”
“That picture is one for the history books,” said Kevin Wilcox. “Thank you to everyone helping to make this happen!”
Error, group does not exist! Check your syntax! (ID: 11)

While the 149 comments may not have been as much fun as, say, reviews of the Hutzler 571 Banana Slicer on Amazon, they were interesting, even entertaining and often political.

“Smart use of the DMV lanes,” wrote Michael Donahue. “I applaud the Democratic administration for doing a great job despite our current federal government failing at every turn.”

“I think you all have been Brainwashed to believe a corrupt government and a compromised media,” wrote Paula Manerchia-Kane.

“When did this start and why the hell hasn’t information been advertised?” demanded Bill Treible. “Buddies first????”
Some people envied those in line.
Error, group does not exist! Check your syntax! (ID: 11)
“Please have mass drive through vaccinations for the next group as soon as possible,” wrote  Sandra Schaefer Curson.
“Wish I had known about this,” wrote Rebecca Carey Dyer. “1a here treating 20ish patients a day … no vaccine yet.”
“I’ve been calling and emailing for vaccine info for my practice for weeks with no reply,” wrote Tracy Day Dissinger.
Despite the glee that many felt seeing so many being vaccinated at once, some had a few issues with the set-up.
“There’s got to be a better way than those insane lines,” wrote Tom Vincent.
Error, group does not exist! Check your syntax! (ID: 11)
“Using cars to idle in lines is the most unnecessary wasteful and environmentally toxic thing I have ever witnessed,” wrote Dinah DeMoss. “We have done it for food banks, testing and now vaccination. For goodness sakes through the Air Base we have some of the best logisticians in the world.”
At least one writer didn’t think we needed military help.
In the vein of all the memes that suggest letting PTA moms take over vaccinations because there would be organized color-coded plans, lines and tables, complete with snacks and a juice box after each shot, Ginny Anthony-Glendaniel wrote, “Put chick filet on the job.”