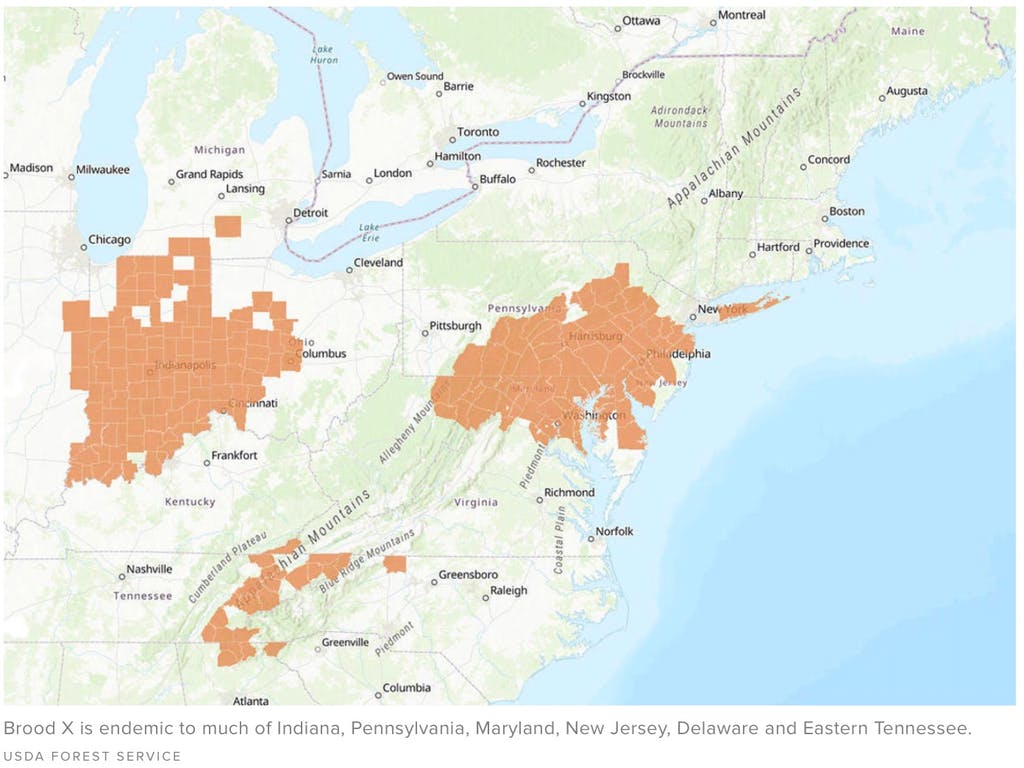 A bunch of noisy insects will be back this year for their spring house party held every 17 years.

The great eastern brood of cicadas, known as brood X, is expected in a dozen states, and Delaware is one of the lucky ones.

“A mass emergence for sure,” said University of Delaware entomology and wildlife ecology professor Brian Kunkel, predicting an inundation in at least the northern half of Delaware.

A University of Connecticut research project invites your help in tracking the invasion.

CicadaMania predicts they’ll start showing up in mid-May – when trees are leafing out, irises are blooming and the ground reaches 64 degrees – and last until late June.

“They rarely do much damage to the overall health of mature trees,” Kunkel said, but trees planted in the last year or two are more susceptible. They should be protected, or the cicadas hosed off or picked off.

The males make a lot of noise: 80 to 100 decibels, equivalent to a lawn mower, Michael J. Raupp, emeritus professor of entomology at the University of Maryland, told USA Today.

You can hear samples on CicadaMania.

“Sometimes cicadas are attracted to the sound of your mower,” Kunkel said, noting that males use their songs to attract females. “You may be bombardiered by cicadas thinking you are enticing them forward.”

Brood X is the 10th tracked brood of cicadas, which appear in 13- or 17-year cycles.

Experts track 12 broods of 17-year cicadas and three of 13-year cicadas in the United States. By breeding on those prime-number cycles, they avoid regular predators.

“Annual cicadas (cicadas that arrive every year) often have wasps specialized to prey on them; periodical cicadas have no such wasp because no wasp could evolve to synch with it,” according to CicadaMania.

Cicadas are just over 1 inches long and incapable of biting or stinging. They have five, usually red eyes.

While they’re alive, they ingest only tree fluids and excrete something called honeydew or cicada rain.  Adults live for four to six weeks, just to mate and lay eggs, according to the federal Forest Service, and the cycle begins again.

“It’s not easy being a cicada,” Fox Van Allen reported on CBS. “Cicada are big and slow. And despite having wings, they don’t fly especially well. … The only serious evolutionary defense cicadas have against extinction is their sheer numbers.”

Cicadas make great bait for fishing, and many creatures eat cicadas, including pets and (gulp) people. Watch out for the crunchy exoskeleton.