“Her first admission – she painted this sign, and it became her saying,” Karen Marsh wrote about Victoria. “Over 4,000 T-shirts have been printed and worn by friends all across the world.” (Karen Marsh photo)

Victoria Marsh’s experiences over the last 6½ years show the power of perseverance over her bone cancer. Her experience on Friday shows the power of human hair.

The Middletown resident is one of the differently abled young people in the Appoquinimink School District Learning Independence for Everyday program.

A lifetime of coping with her Down syndrome got harder when she was diagnosed with osteosarcoma, went through multiple types of cancer treatments, saw the cancer spread to her lungs and had one leg partially amputated.

It got even harder when the pandemic kept her from school friends and activities. She has a compromised immune system and, despite all the family’s precautions, she also got COVID-19. 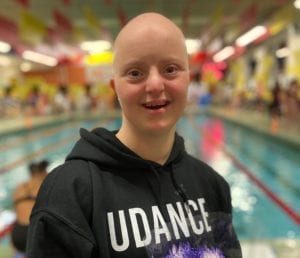 After LIFE teacher Tina King heard Victoria had lost her hair a fourth time after chemotherapy, she wanted to let Victoria cut her hair (and of her 9-year-old son William) at an Appoquinimink High event to spread awareness about osteosarcoma and lift her spirits.

“I want people to see Victoria for the amazing warrior she is and all she has overcome with a smile on her face,” King said before the event.

Victoria uses a wig from Wigs for Kids, and the hair was donated to the nonprofit.

“The loss of her hair touched her,” said her mother, Karen Marsh. “It’s amazing how her self-esteem grew when she wore a wig or cap wig” (a baseball cap with attached tresses). 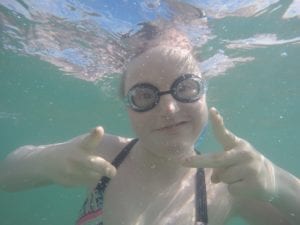 “Osteosarcoma is just plain ugly,” Karen wrote in a plea for research funds on MIB Agents. “The reality is we will fight this disease forever. We just don’t know how long forever will be for our kids. Selfishly we all want forever to be, well forever … years and years from now. But without research specifically designed to target osteosarcoma, the reality, unfortunately for too many families, is that this ‘forever” isn’t far enough in the future.”

Victoria was diagnosed with cancer in December 2014, and a few months later she received the prosthetic that her family calls her “fancy foot.”

In between all the hospitalizations (“it would probably break my heart to count the days,” Karen said) and the various treatments, Victoria continued to push life. She learned to surf and ski. 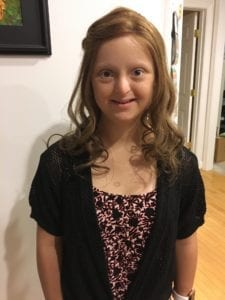 At school, she managed the volleyball team; served as co-treasurer of Family, Career and Community Leaders of America; was a Best Buddies member; and swam on the varsity swim, favoring freestyle and breaststroke.

Her father, Rob, said many swimming coaches have called Victoria an inspiration. “Despite all the adversity, she keeps going and smiles all the time,” he said. “She gives kids a new perspective on how tough you can be.”

Victoria is 19½ and will age out of the LIFE program at 21. She would like to work as a preschool aide, and the family hopes to connect with teachers they know. That said, “a year and a half is an eternity,” Karen said. “We look that far ahead. And we don’t.”