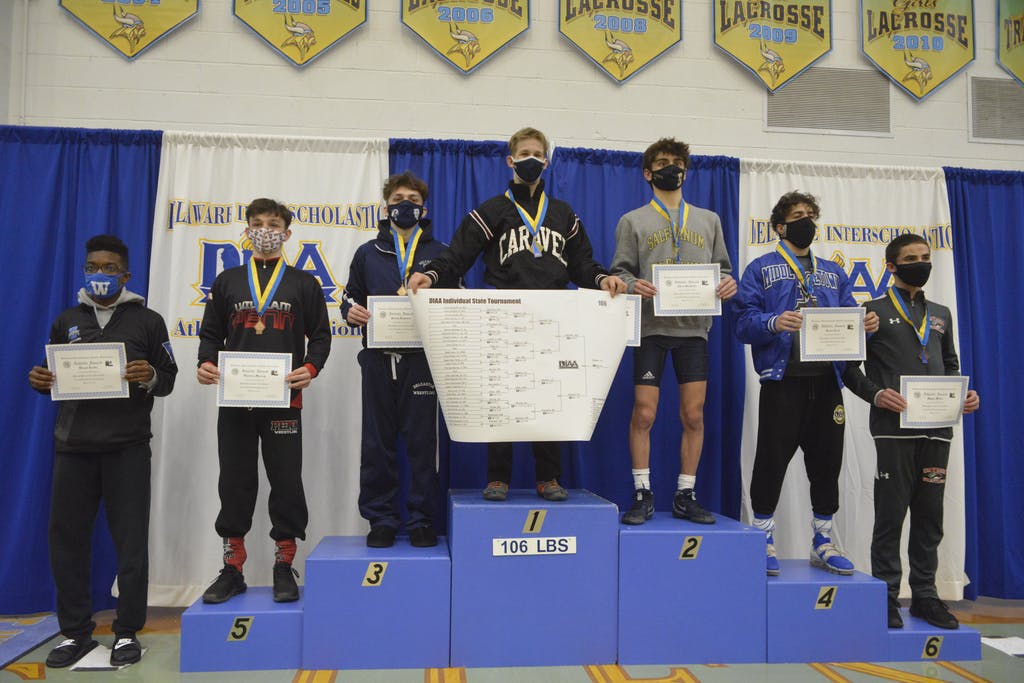 Limited spectators, wrestlers wearing masks and socially distancing in the cafeteria between matches.

Many firsta occurred during the event. It was the first time the championship round was held on a Wednesday night, Cape Henlopen won their first team championship in wrestling in 52 years, a pair of eighth graders appeared in the finals for the first time and one — Caravel’s Eddie Radecki — was the first eighth grader crowned state champion in 55 years when Claymont’s Jack Hession won a state title in  1966. 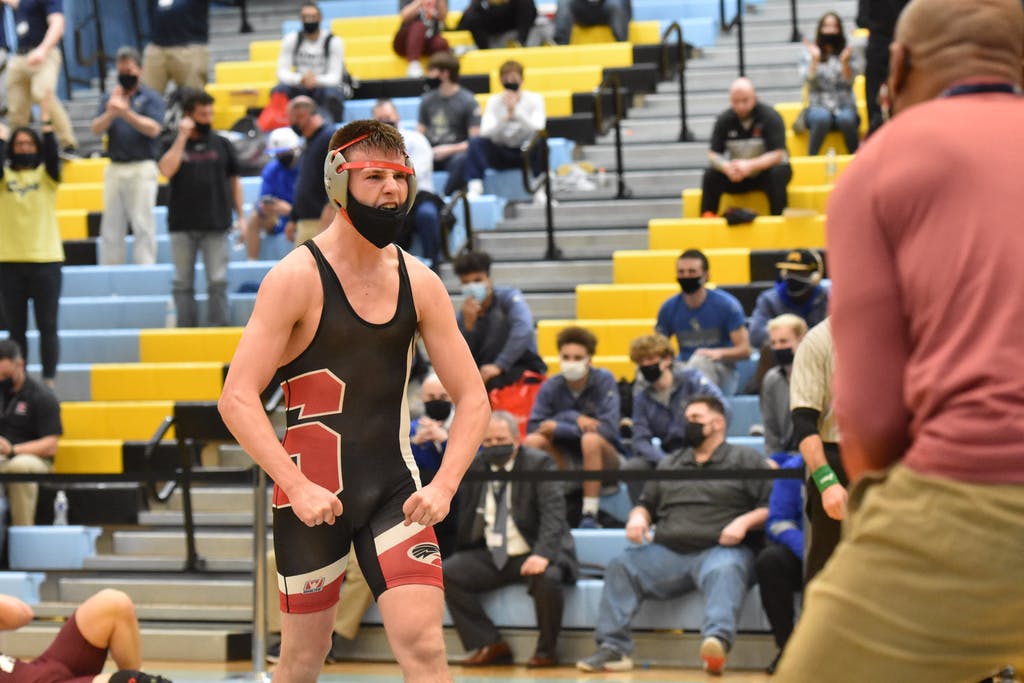 The night concluded at 160 pounds where Smyrna’s Joey Natarcola won a 6-4 overtime thriller over Caravel’s Nick Hall in a matchup between a pair of two time defending state champions. Hall scored the first points with a takedown 45 seconds into the match, but Natarcola escaped midway through the first period and scored a takedown of his own taking a 3-2 lead into the second period. Natarcola scored on an escape in the second period taking a 4-2 lead, but was called twice stalling in the period giving Hall a penalty point to close the match to 4-3.

Hall escaped in the third period to tie the match and eventually head to a sudden victory overtime period. In overtime Natarcola shot in on a single leg attack that led to a scramble between the two where Natarcola eventually secured a double leg, lifted Hall from the mat and scored on a takedown bringing the sparse crowd to their feet.

The match was the most anticipated matches of the tournament for weeks and Natarcola said he was prepared mentally for the stage and has been ready since the eighth grade.

“I have been there before, you quiet all the noise and zone in. You get ready by being ready,” Natarcola said.

The championship round began at 170 pounds where Sanford’s Justin Griffith made good on his third state final appearance. The sophomore built an 8-0 lead before pinning Caravel’s Matthew Duarte in 5:57. Sussex Central junior Josh Negron gave the Golden Knights their lone champion of the night at 182 pounds winning a 5-0 decision over Cape Henlopen’s Dalton Deevey.

Caravel sent eight wrestlers to the championship round and ended the night with five champions eclipsing the school’s record of four state champions last year. Danny Stradley picked up the first title for the Buccaneers winning a 14-7 decision over Cape Henlopen’s Jackson Handlin at 195 pounds. It was the second state title for Stradley as he won a title for Salesianum back in 2019.

“The day after states last year we made it our goal to crown five individual champions. Covid definitely put a different spin on things, but as soon as the kids were allowed to hit the mat we went 100% every single practice,” Caravel head coach Mike Welch said.

“With this year’s team state champion being crowned at the individual tournament it motivated the team that much more. They knew each of their individual results would affect the team score as a result we placed 13 guys on the podium,” Welch said.

Smyrna junior Gabe Giampietro also won his third state championship winning this year’s 113 pound title with an 8-0 major decision over the other eighth grader to reach the finals Trevor Copes of Milford.

Milford crowned two champions with Jack Thode winning his second championship over Dylan Knight of Caravel 2-1 in four overtimes. Both are juniors and could potentially meet up again in 2022. Teammate Trent Grant, a senior, won the 132 pound championship scoring a takedown and nearfall points in the closing seconds of the match for a 13-11 decision over Wm Penn sophomore Daniel Sinclair. 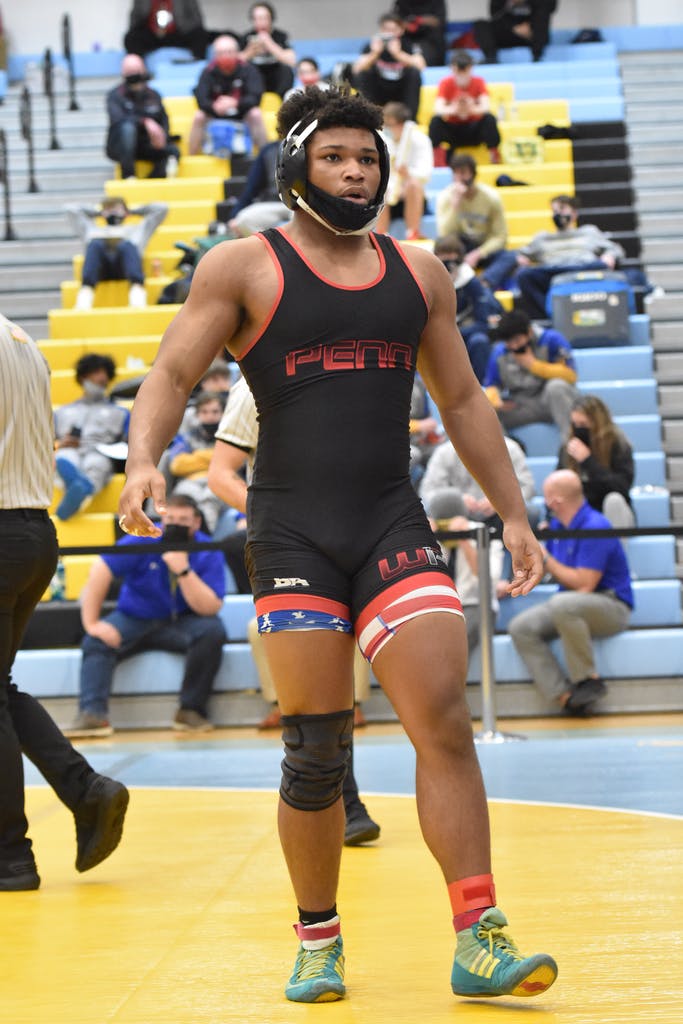 At  220 pounds senior Nasir Drueitt gave Wm. Penn their first champion since 2015 as he won a 12-3 major decision over Sanford senior Jason Lamey of Sanford.

Cape Henlopen got their lone champion of the night when sophomore Luke Bender won the 145 pound championship with a 12-1 major decision over St. Georges senior Jonathan Carrion.

Cape Henlopen won their first state championship in wrestling leading the division one race with 228 points followed by Salesianum with 206 points.