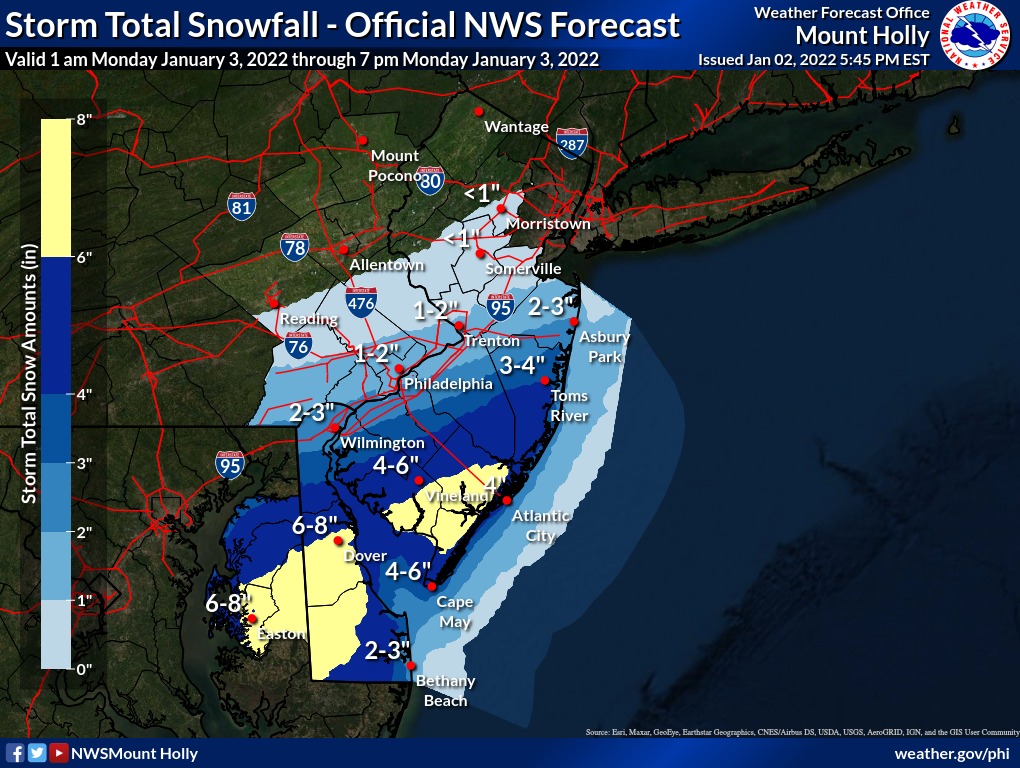 This 6 p.m. Sunday map shows the area expected to get the most snow expanded throughout the day.

As schools up and down the state said they would close Monday because of anticipated snow, the National Weather Service on Sunday issued a winter storm warning for Kent and Sussex counties  Monday and winter weather advisory for New Castle County.

Much of the western part of the state, from slightly north of Dover to the southern state line, is expected to bear the brunt of the storm, with 6 to 8 inches forecast to land there, an expansion of the morning forecast.

New Castle County will get from 2 to 6 inches of snow, with the northernmost areas expected to get 2 to 3 inches, and the amount growing higher as the storm impacts the southern end of the county.”

“Rain will quickly transition to snow late tonight, with mostly snow after 4 a.m.,” the National Weather Service said about 6 p.m. “This will lead to a disruptive morning commute. Heaviest snowfall will remain along and southeast of the I-95 corridor with a rather tight gradient from no snow to several inches lying over the urban corridor.”

Winds are expected to be gusting as high as 35 mph, which may limit visibility as well as cause damage to trees and power lines, the Delaware Department of Transportation said.

The heaviest snowfall is predicted for rush hour, and DelDOT said motorists should expect to slow down and leave plenty of space between vehicles because stopping distances increase greatly on snow- and ice-covered roads.

DART plans to operate fixed route and paratransit bus services on its regular schedule Monday, but delays should be expected and customers should check dartfirststate.com.

The rain means many groups won’t salt the roads before the storm arrives because the rain will wash away the brining, said Mike Svady, head of public works for the town of Milford.

Salt will be applied as soon the weather switches to snow, he said.

The DelDOT snowplow tracker will be active during the storm and is available via the DelDOT smartphone app and www.deldot.gov (click on map layers where a menu will drop down and you can choose snowplows). Additionally, DelDOT also has more than 200 traffic cameras to view road conditions around the state.

The storm comes as schools were expected to reopen Monday, and many had said they would reopen in person, despite rapidly spreading COVID-19 cases.

Many systems said they would close Monday and students would take a snow day rather than attend virtual classes.

The state set yet another new record for the most new COVID-19 cases in a single day Friday, Dec. 31, with 3,554 new cases. It said Sunday that Saturday’s total of 2,328 was expected to rise when more cases were reported and logged into the system.

So many people have been tested that running the tests and reporting them is slow. ChristianaCare Hospital has a taped message on its phone saying that it’s taking eight days to return the results of tests.

The Delaware Department of Public Health also warned that testing could be canceled or delayed, and anyone seeking a test Monday should be sure that the venue they plan to go to is open.

Milford City Manager Mark Whitfield said Sunday morning that employees who had COVID or were isolating or quarantining meant there were fewer workers to hit the roads in the Monday storm.

Svady said Sunday evening that the town plans to roll its fleet of trucks and plows out at 3 a.m. with salt ready to be dispersed in city streets,” he said.

By 8 a.m., he said, the crews will be removing snow on streets and sidewalks, particularly in the priority area of the Boys and Girls Club, day cares, hospice, the Veterans home and all of the industrial park located just to the north of the city, as well as roads leading to City Hall. The Public Works buildings will be open, as well as the public parking lot.

Milford schools are among those closed.