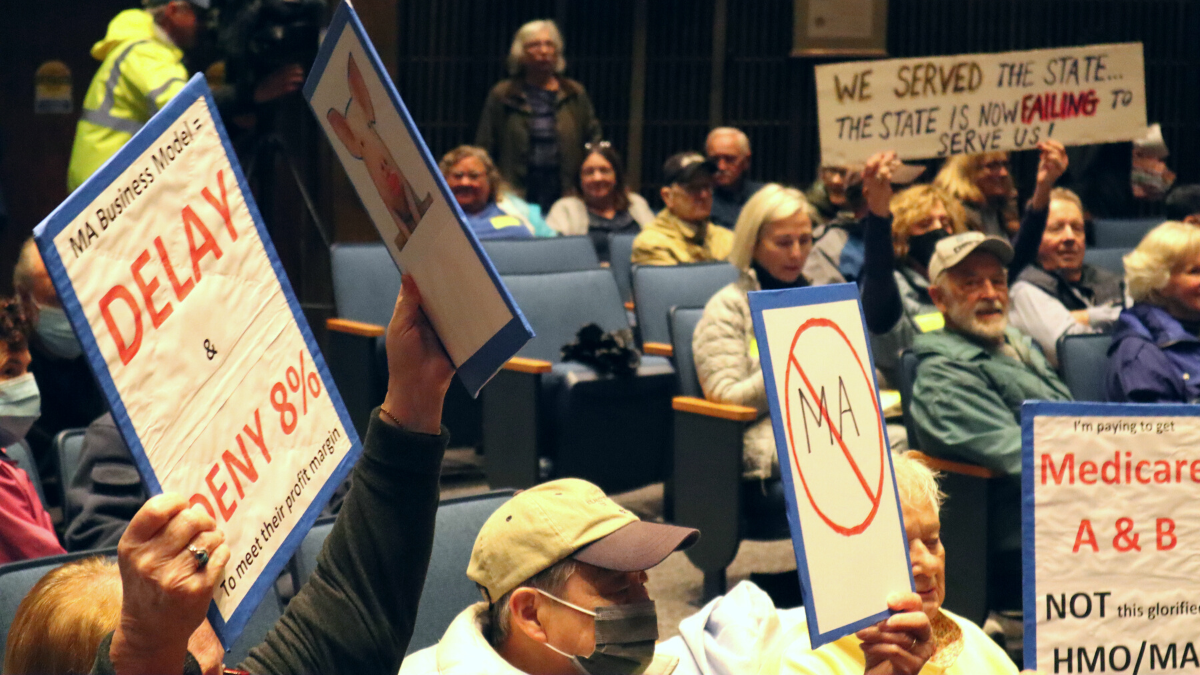 State retirees and pensioners protested the state’s plan to shift them to a Medicare Advantage plan Tuesday. (Charlie Megginson/Delaware LIVE)

Delaware state government retirees gathered in Wilmington Tuesday with a message for Gov. John Carney and his political appointees: “Keep your hands off our Medicare.”

The crowd of mostly senior citizens planned to protest outside the Carvel State Office Building, where the governor, attorney general and New Castle County lawmakers have offices.

Rain forced them indoors to the city and county council chambers, one building over.

It was there that they reiterated their disdain for the state’s plan to shift retirees and pensioners from original Medicare to a new, “specially tailored” Medicare Advantage plan.

The event was organized by the newly-formed Retirees Investing in Social Equity Delaware, or RISE.

The group represents former state employees, many of whom say the reason they were willing to sacrifice private-sector wages and dedicate their working lives to the state was the promise of lucrative benefits upon their retirement.

Now they’ve made it to the finish line, and many feel the rug is being pulled out from beneath their feet at a time when the government claims record budget surpluses.

“We are gathered here today to raise our collective voices in a resounding ‘no’ to privatization of our health care, no to privatization of Medicare, no to this governor and his administration’s attempts to sell out Delaware retirees’ benefits to conglomerates such as Highmark so they can profit at the expense of retirees,” Kowalko told the crowd. 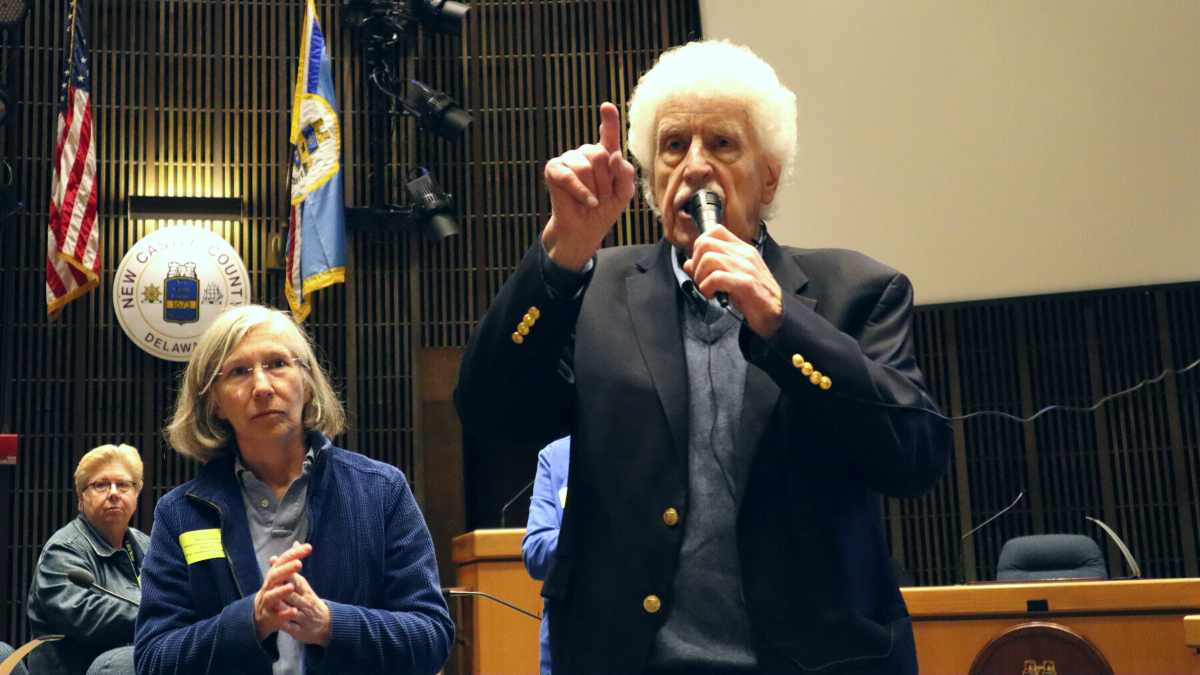 Rep. John Kowalko, D-Newark, may be retiring in November, but he says he has a lot more fight in him. (Charlie Megginson/Delaware LIVE)

A complaint filed in the Delaware Superior Court alleges that the State Employee Benefits Committee — the public body responsible for the switch to Medicare Advantage — “quietly adopted a regulation” to overhaul retirees’ insurance without following necessary open-government laws and procedures, “and without input from those most affected.”

In doing so, the plaintiffs say, the committee violated the Administrative Procedures Act, which details procedural requirements for government agencies in adopting, amending or appealing regulations.

Kowalko continued: “No to the secret backroom deals that deliberately violate transparency and open government obligations and thereby violate the public trust. No to the word-for-word regurgitation of misinformation, false information, and distorted information that the [state] continues to spread at every public disinformation session they conduct. No to any contract conceived, negotiated and created with no retiree input or knowledge.” 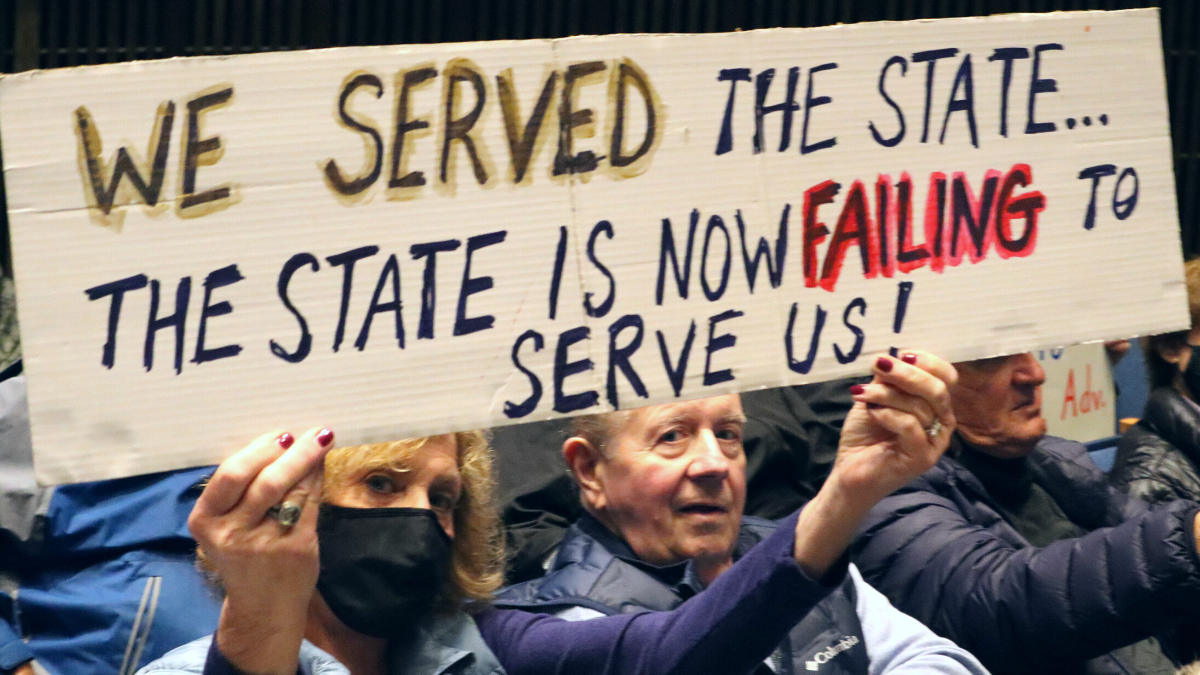 Retirees say they were willing to accept lower wages during their careers because they were promised good benefits upon their retirement. (Charlie Megginson/Delaware LIVE)

That’s more than can be said of any sitting Democratic politician in the state, all of whom were invited to the rally, according to Connie Merlet, Kowalko’s wife.

“It’s important to be up to date on the issues that are important to the voters and this clearly is one,” Lorrah told Delaware LIVE News. “I think people are very upset and feel that this was a backroom deal that wasn’t really done in the light of day, and that’s something I’m very interested in bringing to light.”

“It’s a bipartisan issue,” he said. “The state did something that I think was just absolutely deplorable, changing the Medicare benefits of all the pensioners in the state. Who was minding the store while they were doing this?”

The issue speaks to a larger problem that state government, and Carney’s administration specifically, have with transparency, Kittila said.

“There is no transparency right now,” he said. “Why in the world didn’t they tell anybody? Why are they springing this on them right before the transition has to happen? This is ridiculous.”

The state did hold public meetings on the issue, but many retirees say there’s no way they could have known that they should have been there, let alone what would be discussed. Several lawmakers told Delaware LIVE News they had no clue the change was included in the state budget passed in July. 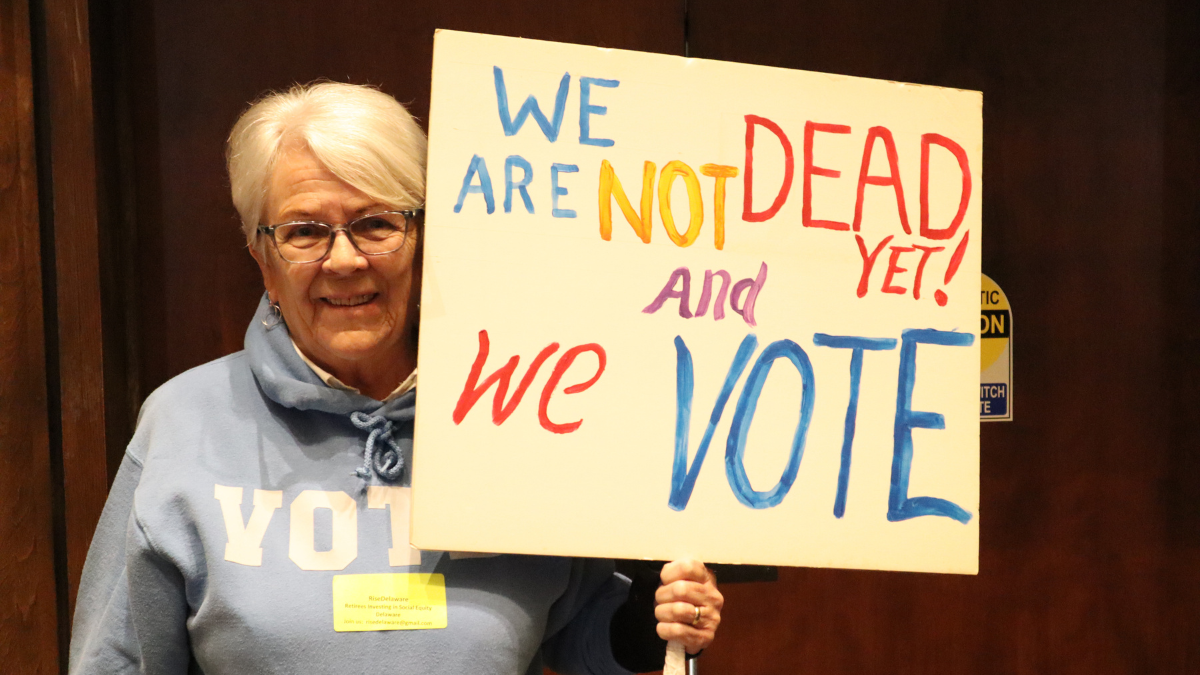 State retirees hope to delay implementation of the new Medicare Advantage policy, at least long enough for them to vote new lawmakers in. (Charlie Megginson/Delaware LIVE)

Sen. Dave Lawson, R-Marydel, said in an earlier interview with Delaware LIVE News that “the only thing we voted on was to reduce the $10 billion underfunded liability by taking 1% of the annual budget each year and putting it toward that.

“To say that we voted on it — yes, we voted on the 1%, but we didn’t vote on the intricacies of this contract,” Lawson said.

Left unchanged, the liability could grow to $31 billion by 2050, they’ve said.

“[Finance Secretary Rick Geisenberger] proudly states that the 1% funding in this current budget will help slow the buildup of arrearages but conveniently fails to acknowledge that 1% of the budget — $45 million or so dollars — pales in comparison to the hundreds of millions of dollars that we gift to the richest corporations in the world.”

Through tax incentives and grants, Kowalko claims the state spends massive amounts of money each year on “corporate welfare” for companies like Amazon, JPMorgan Chase & Co., DuPont, Barclays, Walmart, AstraZeneca, Chemors and others. 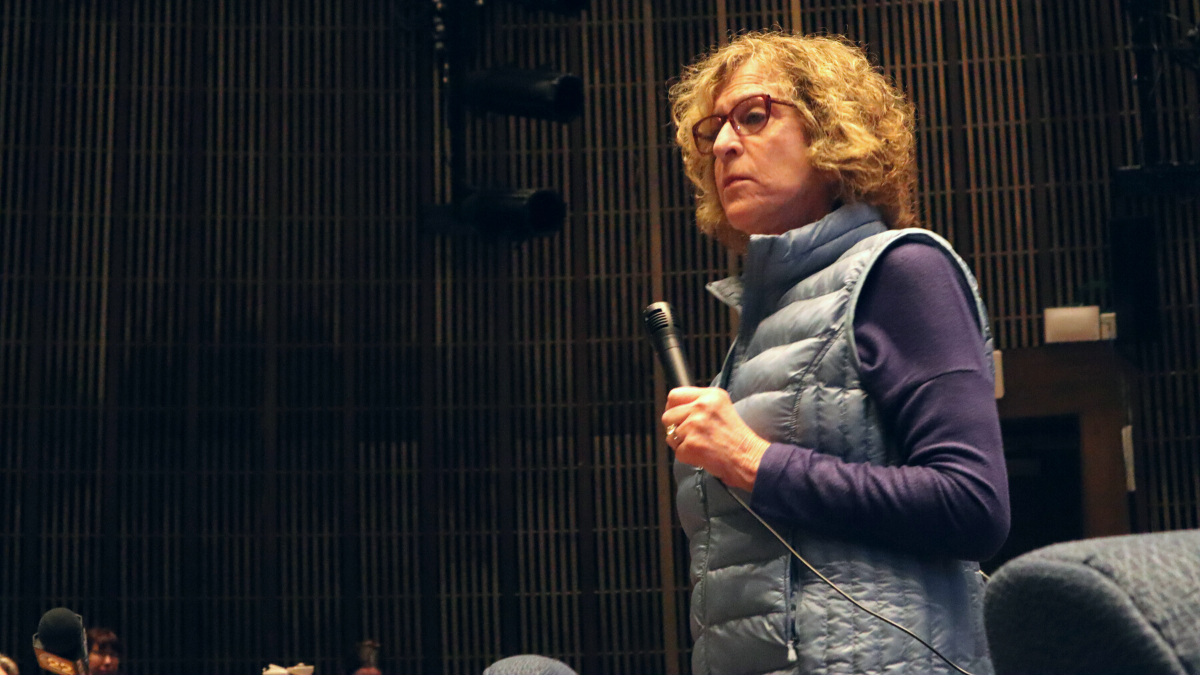 Marsha White, a former Delaware Deputy Attorney General, is one of many state retirees protesting the switch to Medicare Advantage. (Charlie Megginson/Delaware LIVE)

Marsha White, a retired Delaware prosecutor, told the crowd that during her career, she specialized in victim advocacy.

“I spoke for the state. Who is speaking for us?”

RISE anticipates the lawsuit against the state will cost upwards of $150,000. The group has launched a GoFundMe to help pay legal fees.