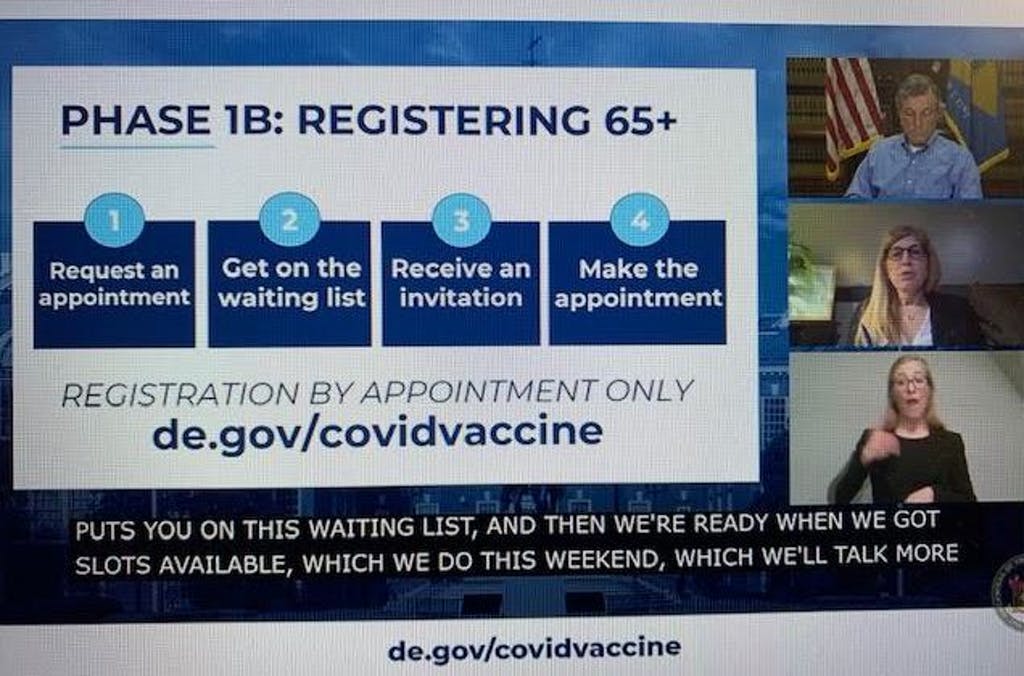 Gov. John Carney and Dr. Karyl Rattay talk about getting those 65 and older vaccinated.

Delaware ramped up its vaccination efforts both to get more people inoculated and to prove to the feds that the state could give a mass number of shots so dose allocations weren’t cut, Gov. John Carney said Tuesday night.

He and Dr. Karyl Rattay, director of the Delaware Division of Public Health, spoke during a Tuesday night online public update and question-and-answer session.

After a slow start, Delaware vaccinated 10,000 people in the last week, Carney said. He hopes that proves the state can actually put more vaccine into arms than it’s now being allotted. The 10,000 doses included taking 2,000 doses back from a state hospital because they had not been used. Carney didn’t name the hospital.

As shots start being given to the 200,000 people over the age of 65 who are in the 1B category, Delaware will blow through those weekly doses, he and Rattay said. They asked for patience as people are chosen for vaccines through the state’s new vaccine registration system, which goes online Wednesday morning. Residents also many call the vaccine hotline at  1-833-643-1715, but Rattay said registering online will be easier.

People who get shots in the early rounds will be based on age and risk factors, and it could be weeks before someone who is registered is chosen, Rattay warned. It also may mean that a husband and wife may not be vaccinated at the same time.

The state already has five vaccination events planned this week, including massive drive-thrus at the Delaware City and Georgetown DMVs. The Delaware City DMV one is closing at noon Friday to accommodate one that afternoon.

Carney and Rattay said that the state now is focusing on getting the first vaccine shot into people more than it’s worrying about getting the second one.

The first shot helps the body recognize the virus and ratchets up the immune system. The second shot strengthens the body’s immune response,  health officials say.

The state also is seeking volunteers to help run the mass vaccinations, and not just medical personnel. They also need people to check registration and help people through the process.

Carney said each event requires about 150 people to run it, and that the state doesn’t want to burn out workers who have already been stressed for the last 10 months. He and Rattay suggested anyone interested in helping should go to the website of the Delaware Medical Reserve Corp, a program run out of the University of Delaware, to sign up to volunteer.

Among the questions he and Rattay answered were:

Can a child sign up his parents and they all go together? Can a husband and wife sign up on the same form for the same time slot?

No. Everyone seeking a vaccination is required to sign up using his or her own information on separate forms.

You are also allowed to put information in for other people, such as your parents.

Members from the same family are also allowed to sign up using the same email address.

What information do I need to register to get my vaccine?

Basic information. You don’t need medical forms or insurance cards, but you have to bring your driver’s license and registration form with you to be vaccinated.

I am 59 with severe underlying health conditions, when can I get vaccinated?

Unfortunately, the only people from phase 1b who are so able to get vaccinated right now are those ages 65 and older. As that group moves through, the state will open up vaccines for others in the 1B category, including frontline essential workers including: fire, police, correctional officers, teachers and education staff (including child care providers), U.S. postal workers, food manufacturing, agriculture, transportation, and grocery store workers.

Many people with underlying conditions and are under the age of 65 are in the 1c category.

The state expects to begin the vaccination of group 1c several weeks from now, but by then better infrastructure for vaccination should exist, including primary care physicians and pharmacies.

What items need to be brought to the vaccination events?

The only things that state vaccination workers will be looking for during these events are driver licenses and the invitation to be vaccinated that gets sent to you once you’ve registered online.

Rattay also recommended that people wear clothing that makes it easier to get vaccinated.

Carney said people being vaccinated with state partners, such as pharmacies and physicians, will likely need to bring their insurance cards with them. Their insurance company will be charged for the shot, which will save the state money, he said.

My husband and I moved to our second home in Delaware last May. Can we get our vaccines in Delaware and where should we register?

People who are living in Delaware should get vaccinated in Delaware when their time comes. It’s fine to get your vaccine here if you have a home in another state.

“How do I know when to get the second vaccination shot?”

Everyone who gets a vaccine is given a card with the  date, what kind of vaccine you got on it, and when your second shot it due. Similarly, because everyone has to register to get a vaccine, you will get reminded to schedule your second round.

Because the state right now is focusing on getting the first dose to as many people as possible, second shots may be coming later than people expect, she said.