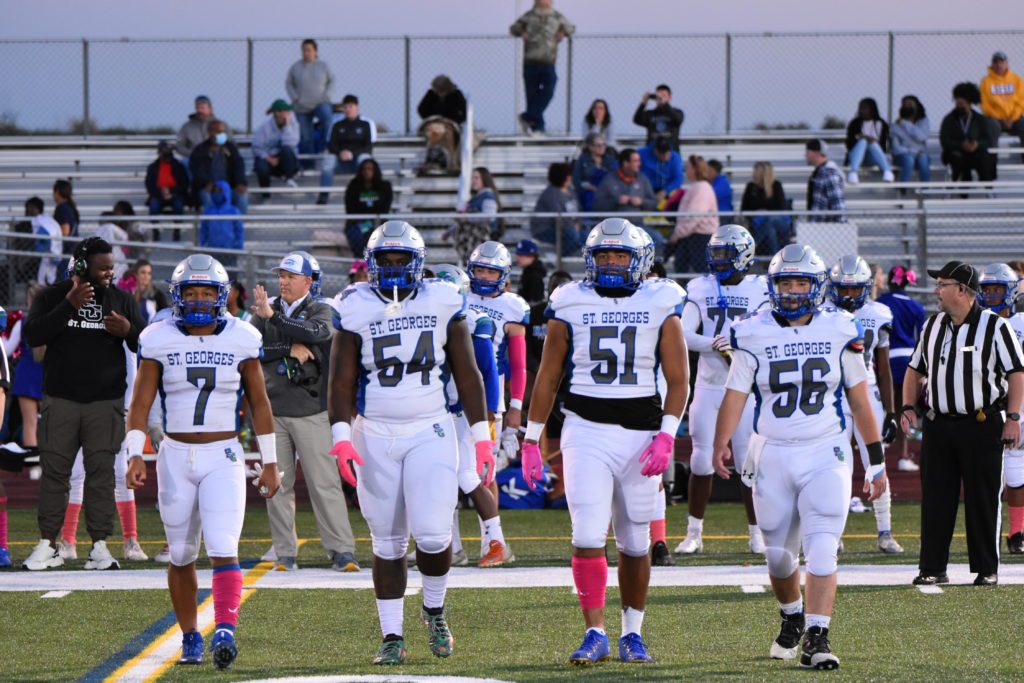 St George’s Hawks improved to 3-1 after winning two straight games after suffering a setback lost to Dover. Last week the hawks were able to corral the high powered offense of Salesianum with a 21-14 victory. Last night they handled their cross town rival Appoquinimink for a second straight victory for the Hawks.

On a cool Friday night under the lights at Appoquinimink two cross town rivals were set to face off. After almost a full first quarter of play St George’s was able to take advantage of a long play as Donovan Brooke hooked up with Brandon Montgomery for a 50 yard pass & catch which put the Hawks in scoring position. With 1:39 left in the first Gi’Vonni Sanchez was able to punch it in for a touchdown from 2 yards out to put St George’s ahead by a 7-0 score. On the ensuing kickoff Appoquinimink kickoff returner Naseam Griffin picked up the ball and returned it 86 yards for a touchdown to tie the game at 7-7 which would hold as the score after one quarter.

Second quarter action began the same way the first quarter did as Brooke’s found Montgomery again for a 38 yard pass putting St George’s in scoring position. After a penalty on 4th & 2, the Hawks were faced with a 4th and 6. Brooks took the snap & sent a shuffle pass to Elijah Alexander who ran it in for the second touchdown of the game for the Hawks giving them a 14-7 lead. That would be the only scoring play in the second quarter as the Hawks took a 14-7 lead into halftime.

In the third quarter with just under 9 mins to go the duo of Brooks & Montgomery would strike against. Donovan Brooks would find Brandon Montgomery down the left side sideline for another 38 yard connection but this time it was for a touchdown. On the first play from scrimmage after the touchdown St George’s would capitalize from a Jaguars turnover. On a speed sweep to Elijah Robinson from Appo, defensive end Alexander was able to punch it out of the arms of Robinson and into the arms of his teammate Sanchez who returned the ball 46 yards for another Hawks touchdown giving them a 28-7 lead.

In the fourth quarter St George’s would go into burn the clock mode. They went to a wildcat offense with Sanchez at helm as they churned up the clock. Sanchez scored his third and final touchdown as he took the snap from eight yards out, running almost 4 minutes off the clock for the Hawks. The Jaguars were able to score a late touchdown when quarterback Ryan vonBrandt found Griffin in the quarter of the endzone which ended the scoring as St George’s came away with a 35-13 victory over the cross town Jaguars.

St George’s improves to 3-1 with the victory and will host #2 Smyrna Saturday 10/9 at Noon. Appoquinimink drops to 1-3 and will face Dover next Friday night at home on 10/8 at 7PM.