Most Brandywine Valley residents have traveled on Snuff Mill Road, a wooded route that winds from Route 52 in Chateau Country to the Red Clay Creek in Yorklyn.

Here you’ll find the 19th-century ruins of Garrett Snuff Mill, which once produced powdered tobacco for inhalation. The familiar name is about to take on a new meaning.

Snuff Mill Restaurant is scheduled to open by mid-July in Independence Mall on Concord Pike.

Seasoned restaurateur Bill Irvin, executive chef Robert Lhulier and Joanne and David Govatos have partnered to create the 28-seat restaurant, which will also have a wine bar and a butchery.

Customers come in for a meal or to purchase cuts of beef, pork, lamb and poultry, along with charcuterie and cheeses.

The owners were inspired by the rural sensibility that a mill evokes.

“We want you to feel like you’re in the country somewhere, and we’ve set up a table for you,” explained Lhulier, who has worked for University & Whist Club, Domaine Hudson and Harry’s Savoy Grill. He was the opening chef at Deep Blue Bar and Grill, now Tonic Seafood & Steak.

The concept is “laser-focused,” said Irvin, who has owned or been associated with 16 Baltimore restaurants. In addition, he was a food-and-beverage director with the Ruth’s Chris Steak House and president of Phillips’ Seafood Restaurants.

“A typical restaurant menu might have 30 items on it — if not more,” Irvin said. “We’re going to focus on high-quality ingredients.”

The menu will showcase pasture-raised meat and produce from purveyors and farms within a 250-mile radius. The circle includes agriculturally rich Lancaster, which has some of the best cattle in the area, Irvin maintained.

In a time of shortages, going local has an advantage. It is the large processing operations that are experiencing staffing shortages and backlogs, not the small ones, Irvin noted.

The partners aren’t concerned that two restaurants failed in the same location.  It is the former home of Chef’s Haven Café and, before that, De La Coeur Café et Boulangerie.)

In 2015, Govatos opened Swigg, a boutique wine and spirits shop, at the same address. Two wine stores had failed in that space. However, Swigg was so successful that Govatos moved to a larger location across the parking lot.

Govatos became involved in the new project after Irvin entered his shop and expressed a desire to open a restaurant with a butchery and wine bar.

“It really piqued my interest,” the wine expert recalled. “I said I’d like to be a part of that. I wanted to touch the customer in a restaurant setting — I’m always preaching this farm-to-glass philosophy.” 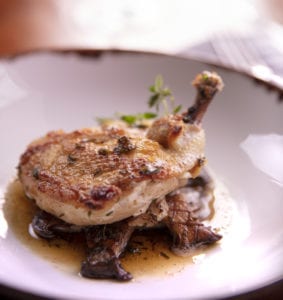 Fans of Lhulier’s famous dinners will undoubtedly suffer a broken heart upon learning of the restaurant.

He promises to offer the type of themed dinners that often sold out, which have included a tribute to the Beatle’s “White Album” or a meal inspired by Julia Child.

At Snuff Mill Restaurant, he will apply his classic techniques to make sausages, bacon, pate and preserves.

The UD art major’s keen eye will also be evident. Expect to find exquisite bistro-like touches in the décor.

Come to think of it, Barley Mill would be an excellent name for a restaurant.

“We might have one called Barley Mill one day soon,” Irvin said. “There might be a string of mills!”

In the once mill-centric Brandywine Valley, the partners will have no shortage of material.