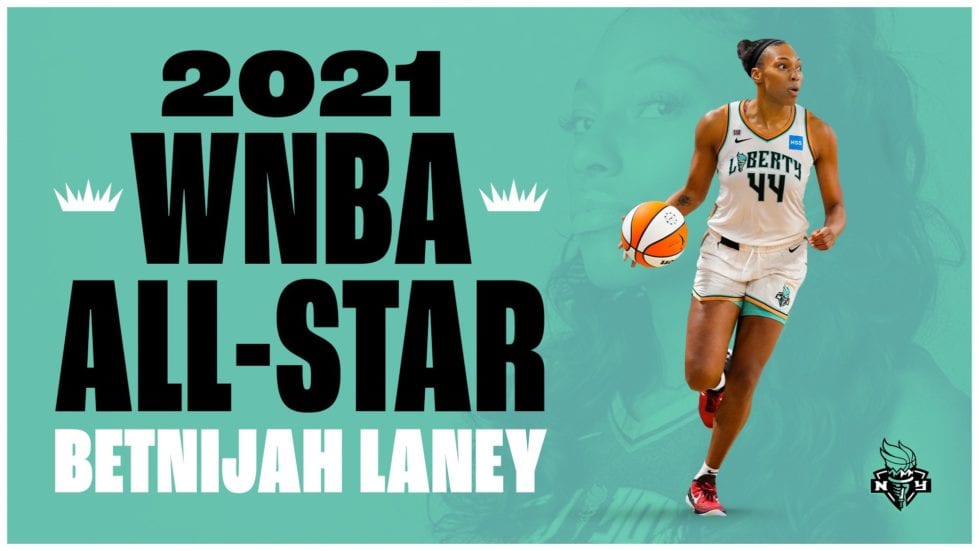 The 2021 WNBA All-Star game will once again star a Delaware high school hoops legend, and no, it is not Elena Delle Donne.  Betnijah Laney has been a rising star in the WNBA over the past two seasons & will represent Team WNBA in Las Vegas on July 14th.

The game itself is a great set up!  The format features a team full of WNBA All-Stars taking on the USA Basketball Women’s National Team.  The legendary Lisa Leslie & Tina Thompson will be coaching Laney and Team WNBA.

They will be squaring off against @usabasketball for the first time ever in Las Vegas on July 14th at 7pm/ET on ESPN.#CountIt pic.twitter.com/hu1vw7Hvsb

Laney has certainly earned the nod this season.  In 19 games, she is averaging a career high 19.6 points, 5.3 assists, and 4 rebounds per game for the New York Liberty.

The career year is fresh off being named the WNBA Most Improved Player in 2020 when she set career highs in points per game (17.2), assists per game (4), rebounds per game (4.9), steals per game (1.6), and her shooting percentages.  It finally came together for Laney in 2020 while playing with the Atlanta Dream.  In 22 games during last year’s unique season, she was called on to become a full-time starter for the first time in her career.

The success is refreshing to see for those who have followed Betnijah’s career in the WNBA.  After being selected 17th overall by the Chicago Sky in the 2015 WNBA Draft, Laney would only start three games in her first two seasons with the team.  An ACL tear injury after the 8th game of the year in 2016, kept Laney out of the League for two full seasons.

She returned to the WNBA in 2018 after signing with the Connecticut Sun.  She played in 29 games that season, but still wasn’t given much opportunity playing 9.3 minutes per game and averaging only 2.7 points per game.

2019 saw Laney earn real minutes for the first time in her career.  She played 25.8 minutes per contest with the Indiana Fever, and started 27 of 34 games.  Laney was clearly starting to figure some things out and showing the WNBA she belonged and was ready for a bigger role.  This was the turning point for her WNBA career, and catapulted her to the above mentioned success.

The success Laney is finding the past two seasons shouldn’t come as a surprise if you followed her career at Smyrna High School (2008-2011).  Laney was a three-time First Team All-State selection with the Eagles.  Her other accolades included being the consensus player of the year in Delaware in 2011, a two-time Gatorade Player of the Year for Delaware, and lastly earning McDonald’s, Parade, and WBCA prep All-American Honors in 2011.

Also, while in high school, she played with USA Basketball’s U17 and U16 World Championship teams in 2010 & 2009 earning gold medals in both events.  These experiences have undoubtedly helped Laney achieve the greatness that we’re seeing from her the past few years.

Betnijah Laney & Candace Parker will look to lead Team WNBA to a victory against legends Sue Bird, Diana Taurasi & the rest of a loaded Team USA squad.  You can watch the game on July 14th on ESPN.  The game is set to tip-off at 7pm eastern time.