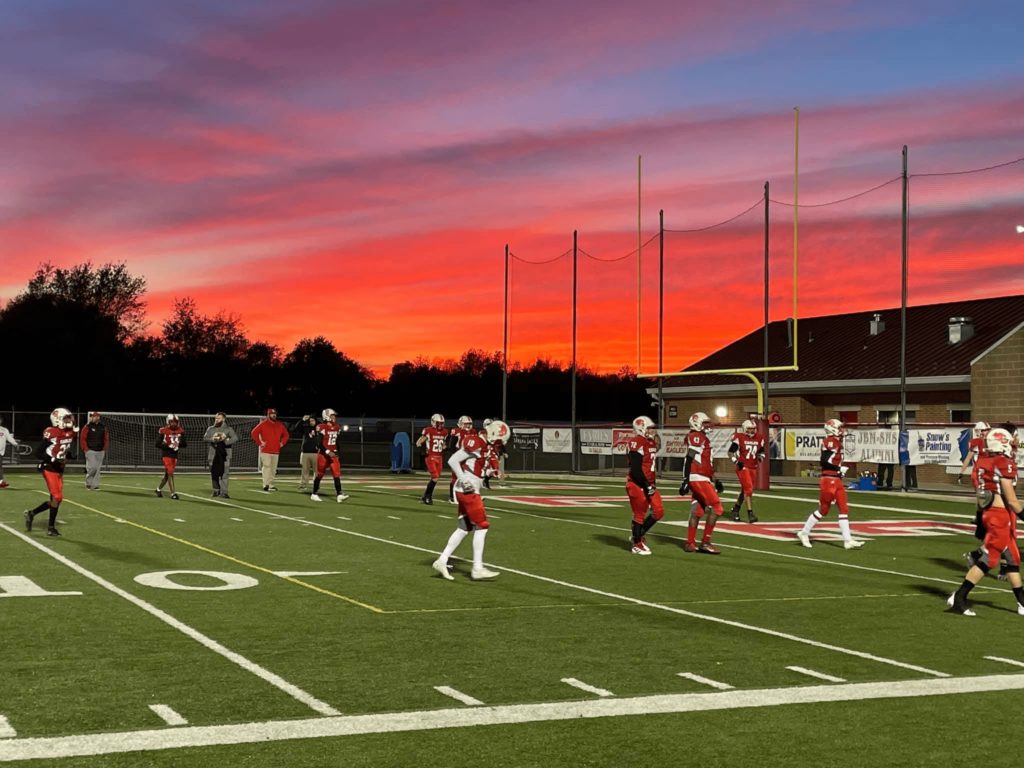 The sunset was nearly “Eagle Red” just before kickoff on Senior Night at Charles V. Williams Stadium Friday night. That was an omen of what was about to happen as 17 seniors (9 starters) went out in style in their final regular season home game before a bundled-up crowd in a 48-7 win over Appoquinimink. The game was played mostly in the 30’s but that didn’t seem to bother the “red hot” Eagles as they won their 6h straight game to improve to 7-2 on the season.

Smyrna started out with “short fields” on its first 3 drives. Brandon West blocked the 1st two Appo punts, giving the offense the ball at the 18 & 16 yard line of the Jaguars. It took just 3 plays to score the opening touchdown on a 7-yard run by senior Wayne Knight. The second Eagle score took just one play as Cameron Edge zipped a sideline pass to senior Devin Demoe who dove, keeping his feet inbounds, and hit the pylon at the same time for an outstanding catch. The conversion was good as Wayne Knight passed to Nate Chandler in the back of the endzone and it was 16-0 Smyrna. The Eagles added a 3rd first quarter touchdown when Edge made a perfect pass to Denim Smith for 18 yards and a 24-0 advantage.

The Appo defense got a stop on the Eagles midway thru the 2nd quarter and quarterback Ryan vonBrandt engineered the best drive of the half to the Smyrna 20 but consecutive sacks by West, senior Nate Lesniczak and Julian Charlescar ended the Jags scoring threat. Following the turnover on downs it took the Eagles just 2 plays to score again as Edge found Yamir Knight in stride for an 82-yard touchdown pass, the longest play of the game. Senior Dwayne Ratcliffe ran in for the conversion and a 40-0 lead.

The Jags put another good drive together as vonBrandt ran and passed his team into Smyrna territory connecting with wide receivers Jaden Weatherspoon, Mason Reinhart and Jalen Bruinton-Brown to set up a first down at the Eagle 43 with less than :30 left in the half. His next pass was picked off by Isaac Stewart at the Smyrna 3-yard line with :23 to go, barely enough time for the Eagles to score again…right? Never count the Eagles out. On the first play, Wayne Knight ran 52 yards to the Jags 45, stopping the clock with :11 to go. After a sideline pass and an incompletion, Smyrna lined up for one final play with the clock showing :00.9. Edge stepped up and fired the “hail Mary” pass into the endzone and the athletic Demoe out-jumped two defenders to grab the ball and the Eagles had a 48-0 lead at the half.

The entire second half was played with the “running clock” as most of the Smyrna starters rested. Appo scored on an 11 yard run by Daniel McConomey in the 3rd quarter for the only points of the half as Smyrna recorded its 6th straight victory and a “senior night” final of 48-7. Seniors Wayne Knight and Devin Demoe both scored 2 touchdowns behind the blocking of senior linemen Tyler Downward, Christopher Ned and Shane Drobinski. Those three plus Evan Blaeuer and Ty Archer gave quarterback Edge plenty of time to connect on 8 of his 14 passes for 214 yards and 4 TD passes. Edge has now passed for over 2,000 yards (2170) 21 touchdowns and only 2 interceptions. Wayne Knight gained 102 yards on just 8 carries and caught a pass for 37 more, giving him 751 rushing yards and 586 receiving yards for the season. He has now scored 168 points on 22 TD’s and 18 conversion runs. Demoe leads the fine Smyrna receiving group with 8 touchdowns as he scored 2 more on Friday.

Smyrna travels to Lewes on the 12th to face Cape Henlopen before having a week off prior to the beginning of the playoffs . The Eagles have clinched one of the top 5 first round byes in the tournament. Appo will host Salesianum on the 12th in Middletown for senior night. The Jags had their 4-game win streak snapped. They still have a chance to clinch a 1st round bye in the AAA playoffs.