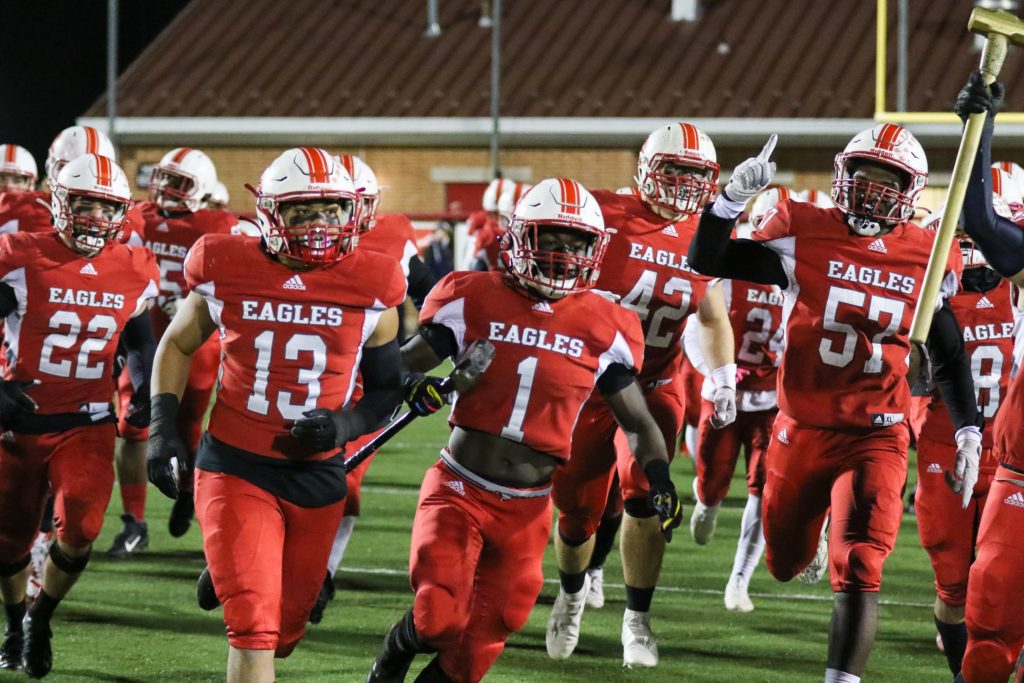 Smyrna – Smyrna scored three 4th quarter touchdowns to pull away from Dover late in a 46-21 semifinal win at Charles V. Williams stadium Friday. Senior running back, Wayne Knight gained 292 yards on the ground and caught 2 screen passes for 48 yards. He scored 3 touchdowns and 3 two-point conversions to give him 264 points for the season.

The game started with the Eagles marching downfield on a 10-play drive covering 67 yards in 3:28, the final play was a Knight 10-yard run for the game’s 1st points. The longest play in that drive was a 17 yard pass from Cameron Edge to Nolan Fretz. Knight ran for the conversion to give Smyrna a quick 8-0 lead. The defenses dominated the remainder of the opening quarter as the Eagles forced Dover into two “3-and-outs” and Isaac Stewart intercepted a pass on another drive. Dover’s “D” tightened up forcing Smyrna two punt twice and the score remained 8-0 into the 2nd quarter.

The Eagles started from the Dover 46 following a punt early in the 2nd quarter, and 8 plays later scored on a 4th-and-9 pass from Edge to Yamir Knight from 19 yards out to extend Smyrna’s lead to 16-0. During that drive, Devin Demoe caught a pass in the middle of the field, hurdled a defender at the Dover 33, and went the distance for what would have been a 57-yard touchdown. However, “hurdling” a defender is a penalty in high school-drawing an illegal contact foul. The play is legal in both college and the NFL, but the rule was implemented in 2012 for high school football to “protect” the defender.

Dover had an answer, driving 65 yards in 5 plays to close the gap to 16-7. The possession featured 3 runs by Ja’Kwon Kilby for 38 yards and culminated with a 20 yard touchdown pass from sophomore Nasheem Cosme to a wide-open Sir William Bauer. Undaunted, the Eagles would put together a time-consuming drive taking over 4:00 off the clock, scoring with :48 left in the half on a pass from Edge to Demoe for 8 yards and a halftime lead of 24-7.

The 3rd quarter belonged to Dover. It would take the Senators just 3 plays to get into the endzone. On 3rd down and 17 from their own 25, Jordan Moran threw deep to Elijah Sessoms who drew double coverage. The pass was tipped by a Smyrna defender into the arms of Parker in stride. He went the distance for a 75 yard TD and made it a 10 point game. The ensuing kickoff by Moran bounced off a Smyrna special teams player and was recovered by Julien Bumbrey at the Eagle 44 yard line. Dover converted a 4th and 1 during a 6-play drive with Kilby scoring from ten yards out to get the Senators within a field goal, trailing just 24-21. That score silenced the large Smyrna crowd as Dover was primed for an upset.

Just as the 3rd quarter belonged to Dover, the 4th and final quarter was dominated by the Eagles. The first drive ended at the Dover 5 yard line and the Senators quickly advanced out to their 35 before committing 4 penalties, two of which were for delay-of-game, and were forced to punt. Taking over at their own 47, it took Smyrna just 4 plays to get some breathing room and a lead of 32-21. During the drive, Wayne Knight ran up the middle for 31 yards, setting up a perfect pass from Edge to Demoe in the corner of the endzone for 25 yards and his 2nd score of the night.

Dover faced a 4th and 20 at their own 46 on the very next possession with less than 6:00 to go. Moran passed deep down the sideline where Stewart made an over-the-shoulder interception, his 2nd of the game. Wayne Knight would ice the game with two long touchdown runs of 37 and 36 yards in his final home game to start the celebration and send the Eagles to their 4th championship game since 2015.

The Senators, under 1st year Head Coach Chip Knapp, finished a fine season at 7-5. Kilby led Dover with 93 yards and a touchdown. The sophomore rushed for more than 1300 yards and 16 TD’s for the season.

Smyrna will face the winner of the other 3A semifinal, either Middletown or Salesianum, next Saturday at Delaware Stadium for the inaugural Class 3A title.