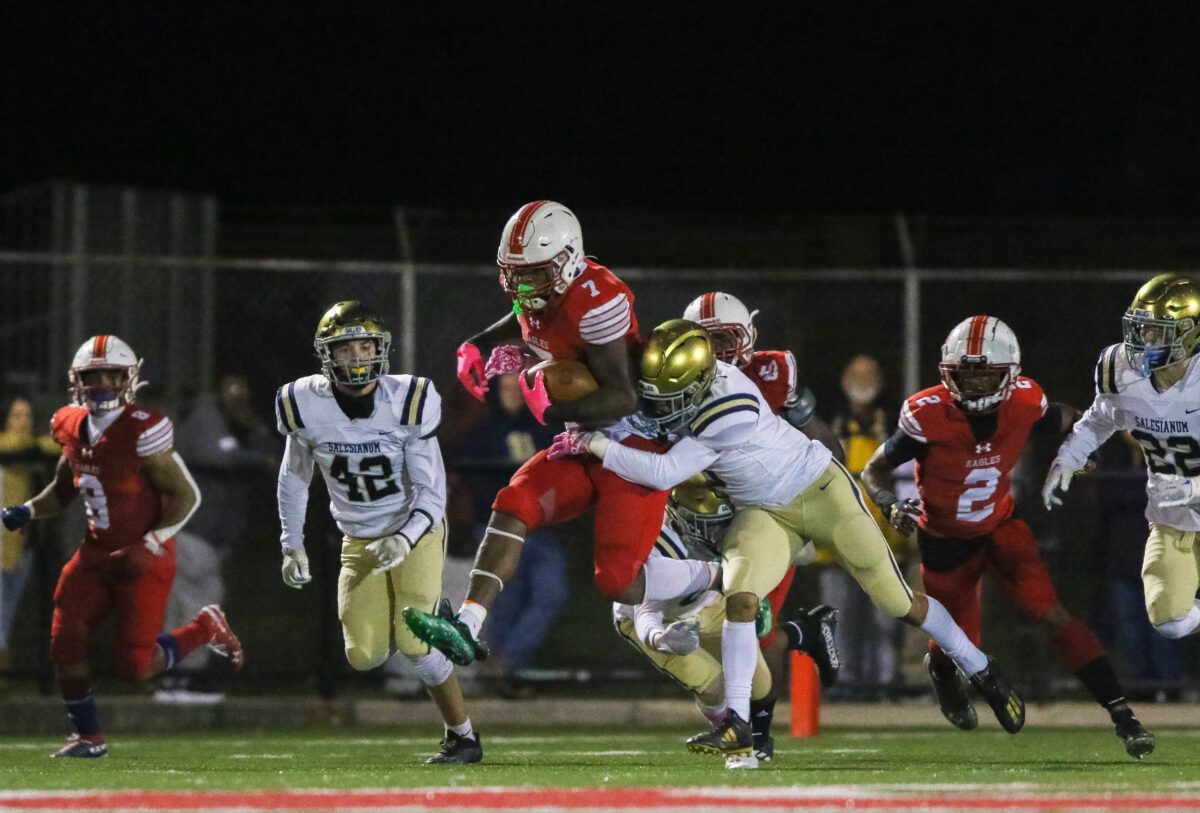 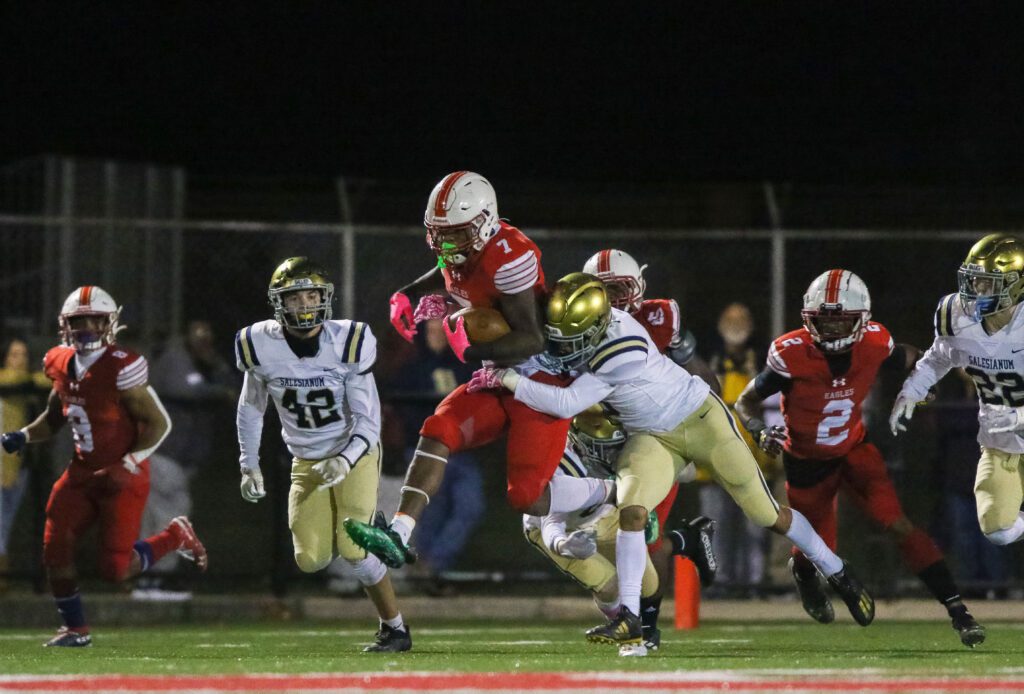 Smyrna Football running back Markell Hohlman rushes during the win over Salesianum, photo by Donnell Henriquez

The highly anticipated showdown between No. 1 Smyrna and No. 3 Salesianum did not disappoint. The opening half alone featured several “highlight” plays, keeping the large homecoming crowd on the edge of their seats.

The home team Eagles’ defense provided the first highlight when senior linebacker Nasir Jenkins gathered a “tipped” pass in stride for a 30-yard “pick six”, barely two minutes into the game. Following a great punt by the Sals’ Aidan Montgomery that pinned Smyrna all the way down to the one yard line, the Eagles brought in their short-yardage “earthquake” formation to gain some “breathing room”. Instead of gaining a few precious yards, Yamir Knight saw a gaping hole up the middle and raced 99 yards for a score and a 14-0 advantage.

The raucous homecoming crowd was delirious with the exciting start. That’s when the visiting Sals kept their composure and grabbed the momentum with a 12 yard touchdown pass from sensational freshman quarterback, Ryan Stoehr to junior wideout Hunter Balint late in the 1st quarter to cut the lead in half at 14-7.

Salesianum stopped Smyrna on the ensuing drive and Aidan Lucey returned the punt 35 yards to the Eagle 12. The first play in the second quarter was a Sean Curley game-tying touchdown run from the six.

The momentum was shifting away from Smyrna until two big plays allowed the Eagles to regain the lead. On fourth down, Yamir Knight faked the punt and scrambled for the first down at the Eagles’ 44. The very next play, quarterback Brian Wright found Knight in the middle of the field for a 39-yard completion as Knight beat “single-coverage” on the route. Senior Markell Hohlman finished the drive on a one yard run to put the Eagles up 20-14 with 9:15 left in the half.

The next Smyrna drive resulted in a “turnover on downs” at the Eagle 42 with 6:30 left in the second stanza, and featured several major penalties by both teams. The Sals converted a long 3rd down on a perfect pass play from Stoehr to Ben Anton at the Smyrna six. Andrew Ransome completed the possession with a one yard run, giving Salesianum a 21-20 lead at the break.

The second half belonged to Smyrna as the defense pitched a shutout (is IT STILL baseball season), limiting the Sals to 70 yards of total offense and intercepting 2 more Stoehr passes to seal the win.

An Eric Spears “pick” (his 4th of the year) led to a Hohlman 11 yard touchdown run and subsequent 2-point pass from Knight to Cole Moyer giving the Eagles a 28-21 lead.

The next touchdown was set up by a Wright pass of 52 yards to Josh Gueh. Wright put the sideline pass where only Gueh could grab it as #2 made an exceptional “over-the-shoulder” reception. Gueh would complete the scoring drive with a 26 yard touchdown. Later in the 4th quarter, Hohlman would break away from defenders and sprint 44 yards for the final score of the game and a 42-21 Smyrna victory.

Hohlman was named the Delaware Live – 302 Sports Player of the Game scoring 3 touchdowns while gaining 152 yards on 17 carries. Knight (the Homecoming King), added 128 rushing yards and a score. Wright completed 10 of 18 pass attempts for 167 yards and a TD.

Sean Curley led the Sals with 70 yards on 18 carries and a touchdown. Stoehr completed 10 of 23 passes for 140 yards and a score.

With just two weeks remaining in the regular season, Smyrna travels to Middletown next Friday for the Appo Jags homecoming game, while the Sals host Dover at Abessinio Stadium.