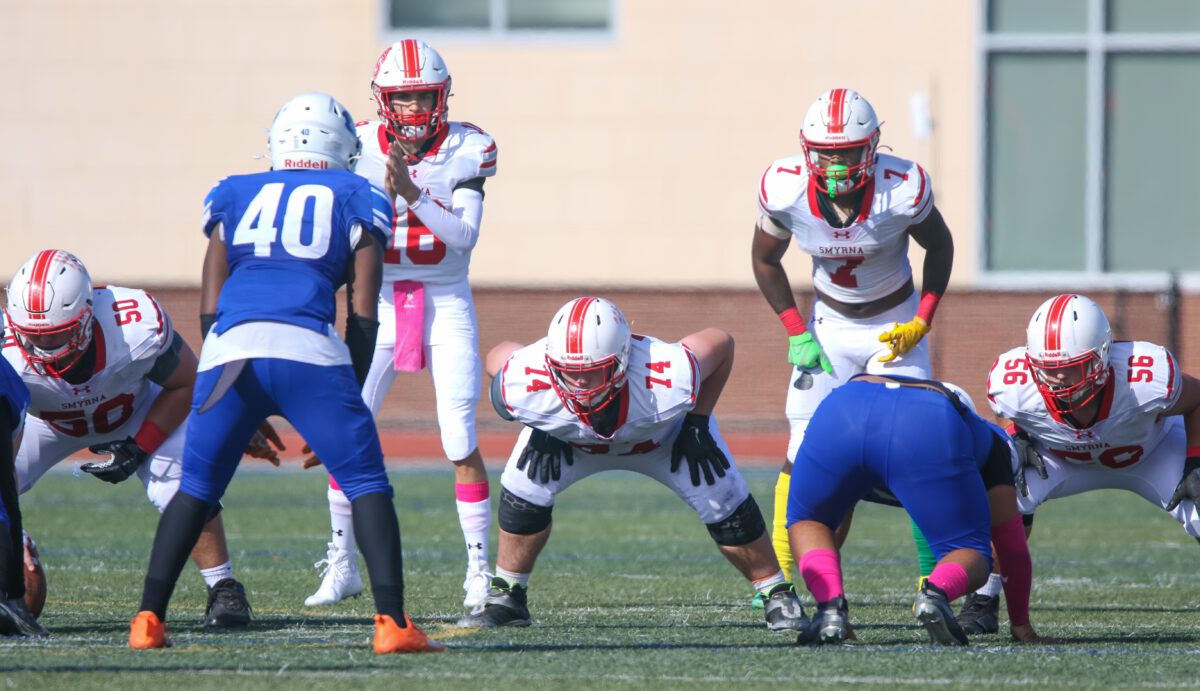 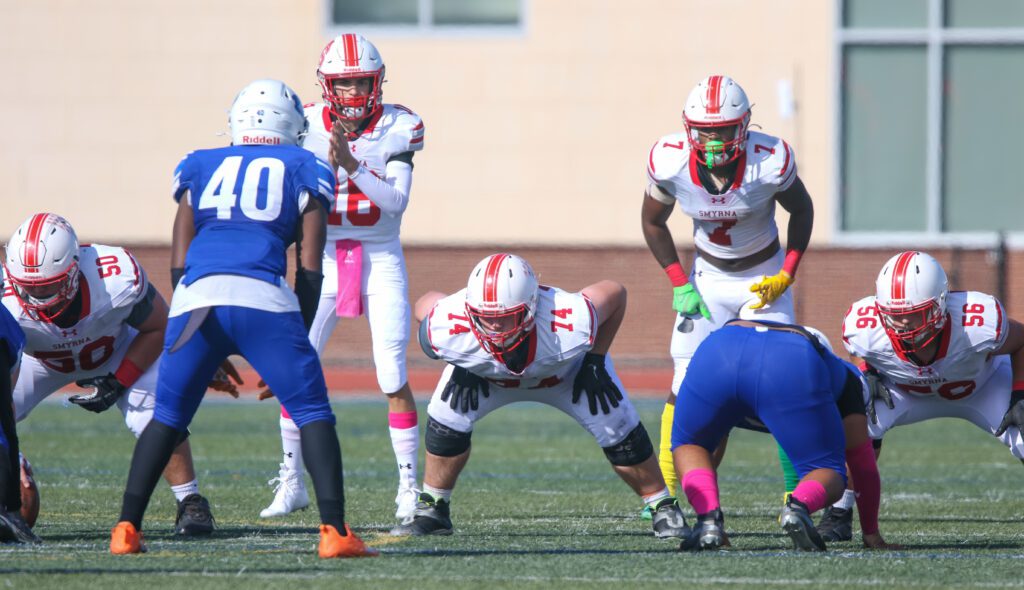 Smyrna Eagles offense setup to run a play in the win over Dover, photo by Donnell Henriquez

Alert to all of those who follow high school football, Smyrna is HOT!  The Eagles have been soaring since their devastating loss to Middletown in week two, and a huge reason has been because of the rapid development of senior QB Brian Wright.  The signal caller had perhaps his best game of the season on Saturday afternoon & he helped seal the top-ranked Eagles fourth consecutive victory over a tough Dover team.

It was a beautiful Saturday afternoon in Dover when the Senators played host to Smyrna and the start of the game did not disappoint.

The game would start with Dover driving the ball all the way down to the Smyrna 25 yard-line after some great run blocking & a huge 54-yard run on a zone-read keeper by Senator QB Nasheem Cosme.

However, a few plays later, the State’s top defense struck first as senior defensive back Eric Spears intercepted a risky pass into traffic by Cosme & took it 86-yards to the house!  6-0 Smyrna.

Dover would answer as this first quarter was very entertaining.

A nice drive of Kilby runs & completed passes saw the Senator offense once again march down the field.  This time Dover would finish the drive with a nice 17-yard fade pass from Cosme to Taishaun Allen on fourth down for the TD.  A Brandon Yoder extra point would give Dover a 7-6 lead just halfway through the opening quarter.

Smyrna’s offense would then take the field & let me be the one to tell you, this is not the same offense who couldn’t move the ball against Middletown.  No, this Eagle offense is LEGIT.  Brian Wright looks like a completely different quarterback & the threat of the passing game is now there which has opened up the running game.

Dover would respond.  A quick drive, aided by an unsportsmanlike conduct against the Eagles, would finish with a 29-yard scamper by Jakwon Kilby to draw the Senators even 14-14 after one quarter of play.

It seemed as though we had the game we were looking for.  But it would be short lived.

Smyrna would run away with this one, scoring two touchdowns late in the second quarter.  One being a version of the famous “Philly Special” run by the Philadelphia Eagles in Super Bowl 52.  The Smyrna Eagles version saw Josh Guey fake a handoff and hit freshman standout Kahmaj Kearney in the end-zone WIDE OPEN for an 8-yard pass.  The score would be 28-14 at the half.

Smyrna would continue their dominance, eventually rattling off 32 unanswered points taking a commanding 46-14 lead in the fourth quarter.  The Senators would tack on a late touchdown to John Parker, 25 yard pass from Nick Whiteman, to bring us to our final of 46-21.

Again, the development of Brian Wright is one of the best stories in the State this year.  He finished the game 19-25 passing for 200 yards and 3 touchdowns, two of which came in the second half.

His ability to be efficient in the passing game has only allowed this dangerous running attack, led by Markell Holman (122 yards) and Yamir Knight (84 yards, 73 of which came on a third quarter TD run) to become more frightening.  They are putting defenses on their toes & making it near impossible to slow down.

Knight had another impressive day himself, finishing with four touchdowns, two on the ground & through the air.

As for Dover, they were led by Jakwon Kilby’s 142 yards on the ground.  They weren’t able to really generate any momentum offensively after the first quarter, and shockingly, sophomore John Parker only touched the ball seven times in this game.

Despite the loss, dropping them to 5-3, Dover has pretty much solidified a playoff spot due to their victory over Cape Henlopen earlier in the year.  At worst they will finish with a 2-2 district record, which means in the worst case scenario they finish tied with Cape, allowing them to advance.

The Senators will finish the year on the road at William Penn & then at Salesianum.  A bounce back is needed for Chip Knapp’s young group as they now have lost two in a row.

The Eagles are soaring high & making a statement.  They carry the State’s best defense & an ever-evolving dynamic offense now.  They will take on Salesianum next week in another statement game atmosphere.  Keep an eye on these Eagles heading into playoff time.