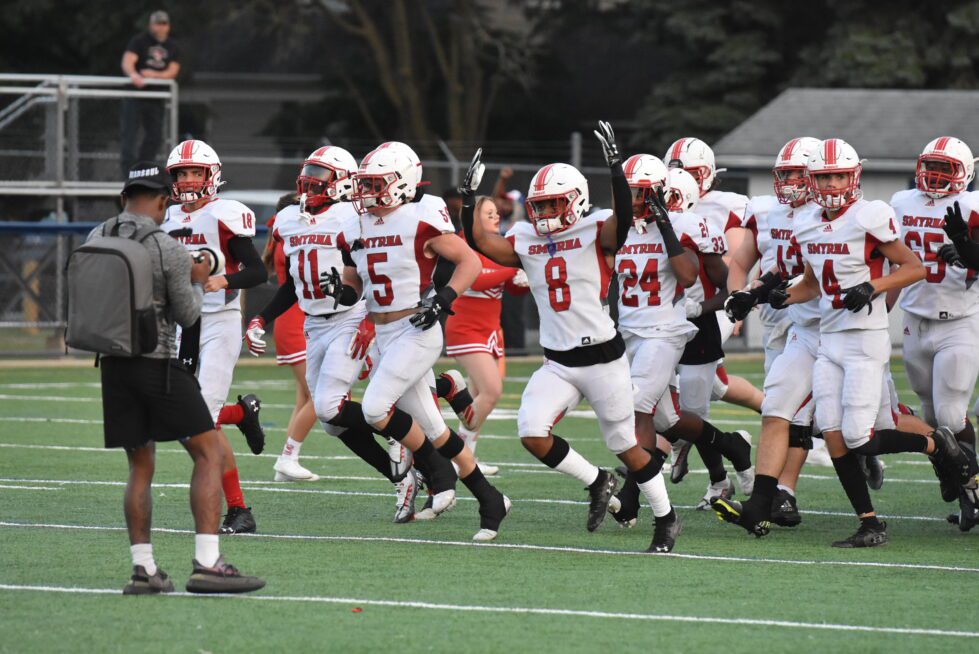 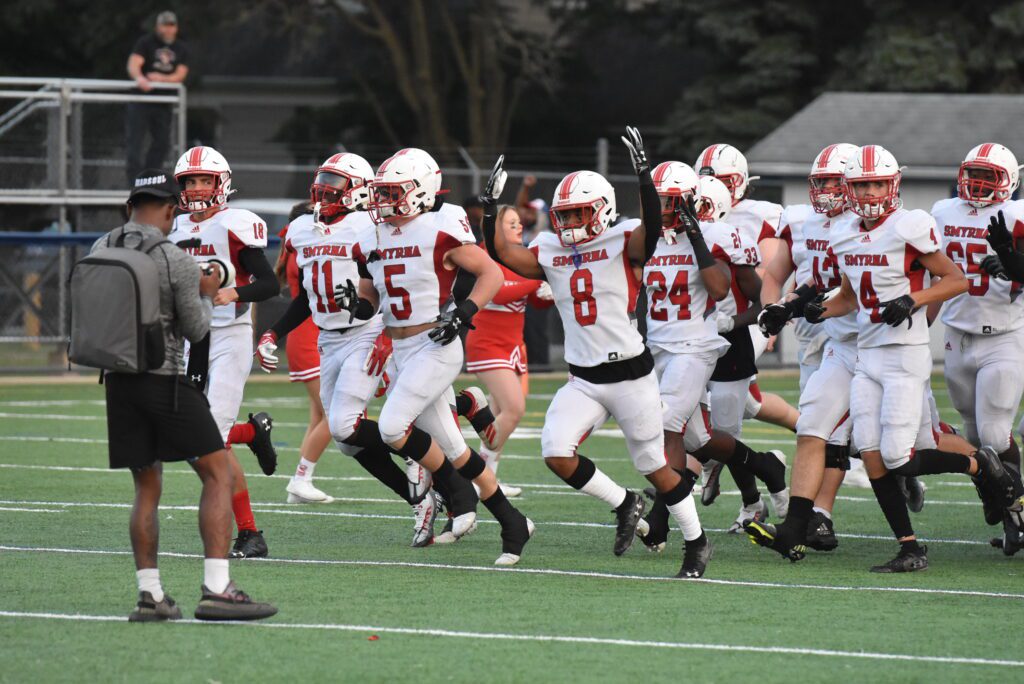 The highly anticipated matchup in Class AAA – District 2 featured two of the best defenses in the state. With high winds and rain, a low scoring contest was expected. Those units dominated a scoreless 1st quarter at Charles V. Williams Stadium Friday night. The home team Eagles are ranked 2nd in the state with the Golden Knights ranked third.

Smyrna drove 90 yards in their 2nd series of the game, highlighted by an acrobatic-leaping catch by Nolan Fretz of 33 yards, but Central stiffened inside the “red zone” and stopped Smyrna on downs. Following a “three-and-out” Smyrna took over at the Eagle 42 to start the 2nd quarter. Senior QB Brian Wright engineered a drive featuring 2 runs by Markell Hohlman and passes to Joshua Gueh, Yamir Knight,  Fretz and Hohlman down to the Central 11 yard line. The Eagles then changed to the “earthquake” formation as Knight followed a block by center Evan Blaeuer into the end zone for the 1st points of the game. Knight ran in the conversion to put Smyrna up 8-0 with 9:33 to go in the half.

The Smyrna defense limited the Golden Knights to just 17 plays in the 1st half for a net of 36 yards and recorded 2 interceptions. Corey Williams’ “pick” led to Smyrna’s 2nd touchdown, a five yard run by Knight with Hohlman adding the conversion run and a 16-0 lead at intermission. The other interception was made by Eric Spears to halt a Sussex Central drive deep in Eagles territory.

The Eagles defense picked up right where they left off, stopping Central on the first drive of the second half. Then the offense put another nice series together culminating in an 11 yard screen pass from Wright to Knight from 11 yards out to complete the scoring at 22-0 with 10:10 still left in the 3rd quarter.

Both defenses then took control the remainder of the game. Hohlman finished the night with 135 yards on the ground and added 42 yards receiving, while “Ya-Ya” Knight had 107 total yards and scored all 3 touchdowns and 20 of the Eagles 22 points. Wright completed 16 of his 23 pass attempts for 168 yards. The Smyrna defense recorded 4 sacks, added 2 interceptions and held Sussex Central to just 83 net yards. It’s the 3rd shutout in 4 games for Smyrna. The Eagles out-gained the Knights 352-83 in total yards.

Smyrna improves to 2-0 in 3A-District 2 (3-1 overall) and will host St. George’s Tech Friday the 7th, while the Golden Knights suffer their first loss of the season and fall to 0-1 (3-1). central travels to Milford on the 7th.