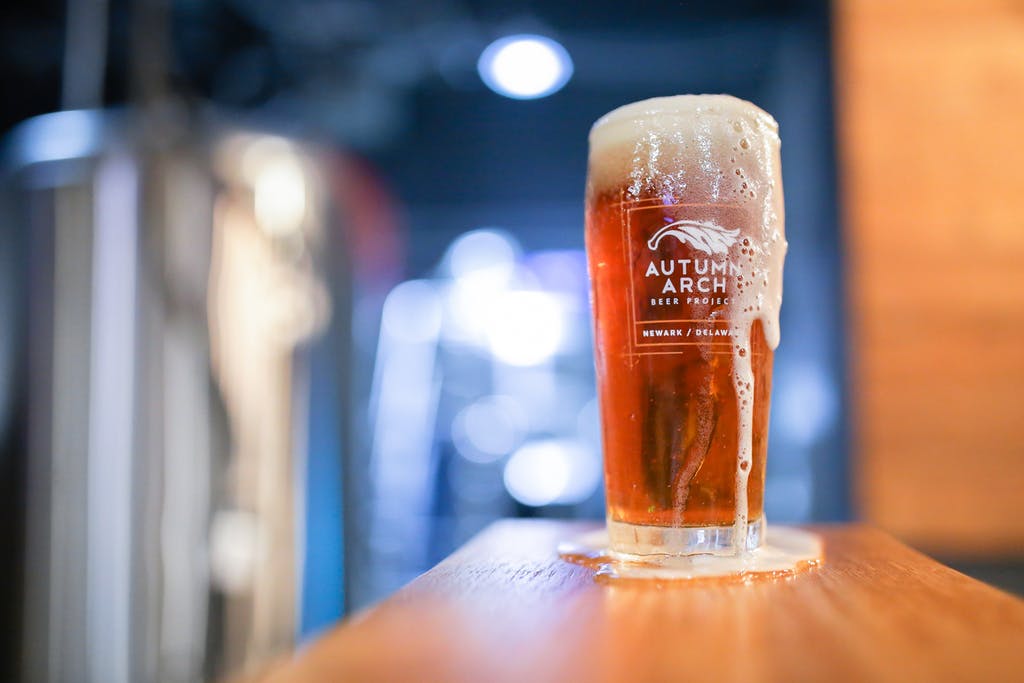 Don’t let its size fool you. AABP, which will turn two in April, has released more than 92 beers.

Most recently, the brewers bottled the first imperial stouts in the new Abstract Methods series.

It’s not your run-of-the-mill stout.

“It’s a super low-volume, one-off, extremely unique imperial stout,” explained Dan Vennard, who owns the brewery with his brother, Jimmy, and Jimmy’s wife,  Kathryn. “It’s not something you normally find in the state of Delaware. It’s complex and really interesting.”

The owners have more in common than their last name. All three are engineers. They also have a passion for eclectic brews.

Jimmy and Katheryn decided to start a brewery while vising Asheville, North Carolina, which boasts about 100 breweries — all with distinct personalities.

“We really enjoyed the vibe in the city,” Jimmy recalled. “I remember sitting down there and saying, ‘Wow, I wish there was something like this around where we live.’”

It was not such a stretch. Jimmy and Dan, who grew up in the Smyrna area, had been homebrewing for years. The UD graduates decided to start their business in the Newark vicinity because it “checked all the boxes,” Jimmy said.

Their wish list included warehouse space, oversized garage doors and windows for natural light. There should be enough room for the brewing operations and a tasting room.

They found 5,400 square feet of space in the Pencader Drive office park that felt just right. The location is in the same park as Midnight Oil Brewing Co.

“There’s obviously going to be some competition between breweries, but then the quality of the beer increases as well,” Jimmy maintained. “You start seeing more dynamic offerings.”

Named for the brothers’ favorite climbing spot in Pennsylvania, AABP strives to release 50 new beers each year. It’s a doable mission given the small-batch nature of the business.

The brewers are known for producing one of the hottest craft-brewing trends: sour beers.

“We have a true American barrel-aged sour beer program — it’s a complicated style of brewing,” Dan said. “It takes 12 to 18 months to get a batch of beer.”

Sour beers can be unpredictable. During one tasting, the brothers told customers about a sour beer that had gone wrong.

“It was not a good beer,” Dan confessed. “But everyone wanted to try it.”

They poured samples for the bold tasters, who agreed: “Yeah, you’re right.”

Although known for sours, AABP covers most categories.

“There’s always a beer that somebody will like,” Dan maintained.

And those beers must have a memorable moniker. Dan’s favorite is a beer called Newark State of Mind, a West Coast Double IPA. Many customers love Supersaurus Rex, an IPA.

Katheryn leans toward the superhero series that salutes different occupations, including frontline workers.

In May, AABP will release Blackboard Superhero to honor educators.

Currently, Jimmy works part-time as an engineer and runs the brewery’s operations. Katheryn and Dan have full-time jobs and also pitch in at the brewery.

They’ll be busier this spring since they will be celebrating two anniversaries in one. Last year’s festivities were canceled due to COVID-19.

The partners want to make a big noise about their beers, but they will continue to produce small batches.

And that, after all, is the goal of the project.