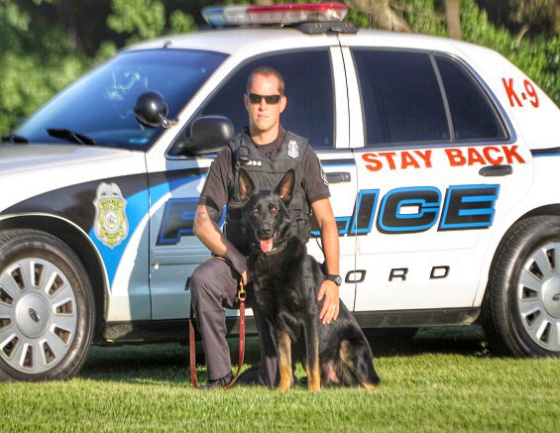 On Dec. 10, 2020, Milford Police Cpl. T.J. Webb pulled his unmarked silver Dodge Nitro behind the white SUV driven by a man accused of trying to kill his own brother in Reading, Pennsylvania.

Two other police cars pulled up nearby at the Rehoboth Beach Econo Lodge Inn.

The officers were working with a U.S. Marshals Task Force to arrest Evelio R. Rivera. They had been watching Rivera, his girlfriend and her three children for a few hours when they saw them leave the hotel for food.

The task force members considered waiting until the next morning to arrest Rivera. They decided, however, that the least dangerous moment would be as Rivera was leaving his car, before he was out of the car or in the hotel.

Rivera had just driven into the parking lot, circled it checking for police and then parked nose-first next to the hotel pool, his girlfriend and two of her kids in the car when Webb parked behind him.

As Webb got out of his car, wearing body armor and a tactical vest emblazoned with “POLICE” and “U.S. Marshals Fugitive Task Force,” he already had his Glock 9mm in his hand, because Rivera was considered dangerous.

“U.S. Marshal, show me your hands,” he yelled at Rivera.

Rivera was shooting at him.

On Monday, Milford Police Chief Kenneth Brown presented Webb with the Law Enforcement Purple Heart Award, given to officers who are injured or disabled in the line of duty by the American Police Hall of Fame and Museum in Florida.

Webb talked about how his family inspired him to fight back from his injuries, including six gunshots, one of which broke his right leg, but he admits having mixed feelings at the moment.

Webb, 39, grew up in Milford. He attended preschool at Avenue Church, then went to Benjamin Banneker Elementary School, the old Milford Middle School, and then Milford High School, where he played a lot of sports.

He doesn’t recall an “Aha!” moment when he decided to become a policeman. He didn’t come from a law enforcement family, but his family had several friends who were in the field.

“So I kind of grew up around it that way,” Webb said. “I think just seeing police officers all the time kind of stood out to me as a very respected profession, and I just thought as a young kid it’d be cool to do. It kind of stuck with me through school.”

After high school, he headed off to Delaware Technical Community College, where he planned to major in criminal justice. The summer after his freshman year, he got a job at Dewey Beach working as a seasonal police officer.

Somewhere along the way, he took a break from college.

After his third summer, Dewey Beach offered him a full-time job and sent him to the state Police Academy. He would go on to work at Milford as a canine and undercover drug officer.

“That’s where it started,” he said.

Rivera kept shooting his purple Taurus handgun as he got out of the car. Only 10 feet from Rivera, Webb fired back as he scrambled to move behind Rivera’s car for cover.

Webb’s gun held 17 rounds, with another in the chamber. He doesn’t remember how many he fired, but he does remember thinking he was going to be killed and that another officer or bystander was going to be hurt.

Suddenly, he was on the ground, his right leg in pain and unable to feel his hands. Rivera began running across the parking lot and as he did, Rivera’s girlfriend got out of the car with her two kids and ran into their hotel room.

Webb could hear shots being fired, but couldn’t tell where they were coming from. His own gun had fallen under the car, and he couldn’t reach it. He crawled under the car to protect himself.

When the gunshots stopped, he could hear the other officers on the task force calling to each other and then to him. Rivera was dead, but Webb didn’t know. Delaware State Police Cpl. Josh DiGiacomo found Webb under the car.

Where are you hurt, DiGiacomo wanted to know. Webb said he didn’t know, but told him his right leg hurt badly.

DiGiacomo tied a tourniquet around his leg. Webb was helped into DiGiacomo’s car and taken to Beebe Hospital, where he was treated before being transferred to ChristianaCare in critical condition.

When he fell, he fell onto both hands, shattering bones in both of them.

His broken leg required a metal rod to be inserted in the bone from his hip to his knee. The bullet in his chin was removed, along with other shrapnel. The bullet that hit his shoulder went straight through.

He’s had several surgeries on his hands.

Additional shrapnel moved from the femur and lodged in his lower abdomen. It will need to be removed through several surgeries. 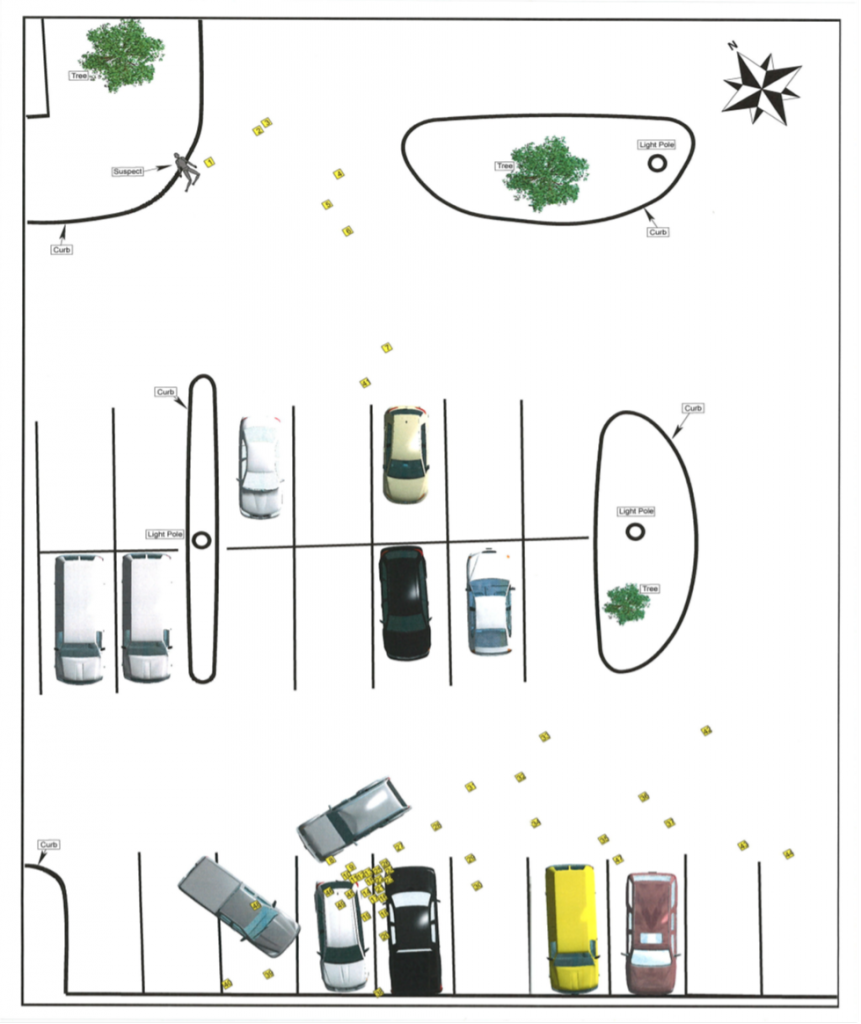 This graphic from the Delaware Department of Justice report about the shooting shows the hotel parking lot.

Webb doesn’t like to talk about the shooting. He’s spoken to a couple of Police Academy classes, but not much in public.

You can hear the tension in his voice when he refers those who ask to the Department of Justice report on the use of force in the shooting, where most of the details in this story have come from.

What he will talk about is how ChristianaCare doctors told Webb in those early days of recovery that it would be a year or more before he consider running again.

He told them he would run a half marathon within the year and set about to prove it.

Around the age of 30, Webb had gotten into running and CrossFit workouts, and his background that promise helped him focus during his recovery.

“I was in pretty good shape when this happened, which was one of my saving graces with recovery,” he said.

Because COVID-19 pandemic restrictions were in place, his family couldn’t visit. Webb was keenly aware that he walked out to work one night and didn’t come home. He was only allowed to see his family a week later when he was being transferred to a rehabilitation facility.

At rehab, they asked him on the first day what his goal was for his stay.

“My goal was to walk out of there unassisted,” he said.

On Christmas, he was allowed to visit with his son for an hour.

Five days later, Webb was allowed to go home, and was brought a wheelchair so he could be taken from his room to the car.

“I don’t need a wheelchair,” he told them. “I’ve been walking here. I want to walk out.”

They agreed, and he walked from the second floor to the first floor and then out to my car.

He was able to do a few things for himself, like brush his teeth, but he had to rely on his wife to help.

“It was a struggle for a little while,” he said.

Webb hasn’t been able to return to the job, but has every intention of going back. 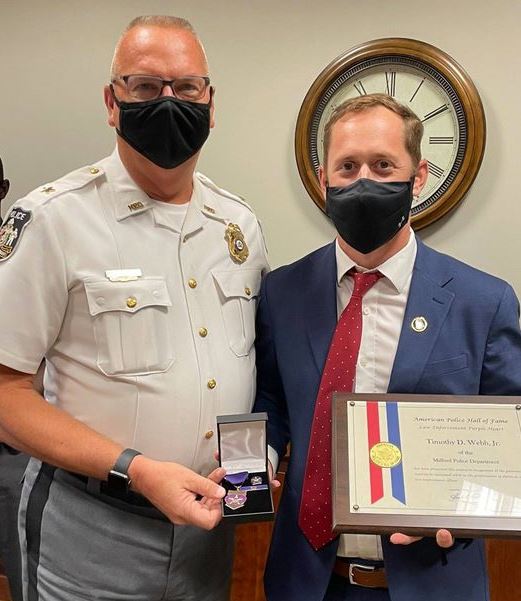 He still has some pain and some issues that come and go. He’s still in physical therapy five days a week for work with his legs and hands. At this point, he said, he wouldn’t be able to handle a gun.

In addition to his therapy, he’s started to run and work out again, and sometimes his son joins him.

“I’ve always had a pretty tough mentality,” he said. “I think that’s paying off for me now.

But he has been amazed to see how his now-8-year-old son’s work ethic has become stronger and he’s much more committed to the activities he’s involved in.

When Webb began running again, he’d do short runs with his son. Sometimes, Webb said, when he told his son he only planned to run a mile, his son would insist they run two miles.

Webb is up to 10-mile runs and has signed up for two Rehoboth Beach half marathons in November, including the one at the Coastal Delaware Running Festival.

He hasn’t had any kind of mental health therapy, but says some will be required before he is allowed to return to work.

He has times when he’s frustrated or down.

“Some days are harder than another day, when the magnitude of things hit you,” he said. “But the way through that is to just remember why I’m working as hard as I’m working.”

Webb says he’s found a lot of inspiration and satisfaction in the feedback he’s been getting for the Facebook posts he’s made about his progress. Friends and others said it inspired them to get started or work harder.

“In turn, that kind of helps me keep going as well, so it comes full circle,” he said.

His Facebook page includes a logo of a tall TJ crossed by an ax over the slogan “Keep grinding.”

“I look at myself like I’m an ax and I’m sharpening it, trying to get back to where it needs to be,” he said.

Webb doesn’t know what he plans to do when he retires after 20 years on the force, but says he will be ready for the next chapter of his life. That likely won’t include going back to college, he says.

“If I’m lucky enough to get to 20 in this job, I’m lucky enough, I’ve always said,” Webb said. “And I really don’t know what I like to do after my 20. I’m just kind of right now doing the day to day and focusing on now. I don’t have a plan for then. I’m just trying to get back.”

His biggest advice for anyone who is struggling with a physical or other issue is to focus on their goals and to stay on track. Sometimes that means digging deep to find what motivates you and setting smaller goals along the way, Webb said.

“It doesn’t matter if it’s some horrific injury you have, or a family setback or something with your job, you got to stay on track and you can’t give up,” he said. “You know where you want to be, you know where you need to be and as long as you keep those two things in mind and you stay on track, you’ll get there. But the most important thing is to stay positive and not give up on it.

“I don’t need to find motivation day to day because I know what drives me, which is my family. Find what drives you and you’ll get to where you want to go.”