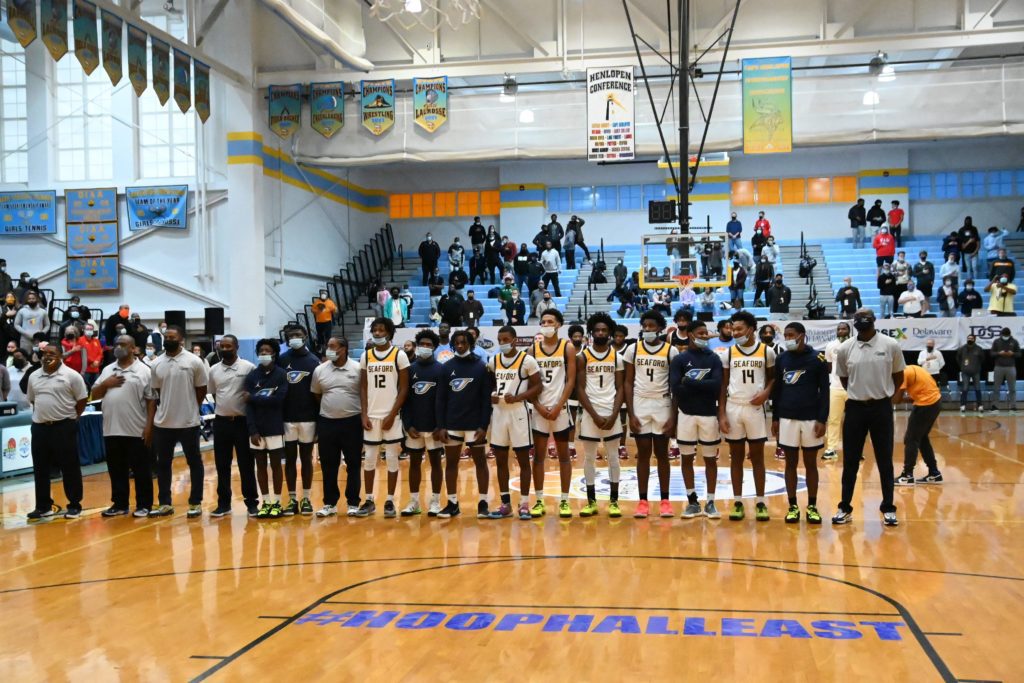 The Seaford Blue Jays took on the Our Savior Lutheran Falcons Tuesday afternoon at the 2021 Slam Dunk to the Beach hosted by Cape Henlopen High School. Seaford, the lone Delaware boys’ team in the event, was poised for a good showing against the New York City squad that lost the night before to national powerhouse, Arizona Compass Prep by 47 points. The Blue Jays entered today’s contest with a 2-0 record, led by Sophomore Kashmeir Wise who has scored a total of 47 points in the two games including 10 three-pointers. The first quarter of the game was a typical back and forth between two teams who wanted to play fast and attack the rim. As the quarter progressed however it became clear that Seaford was the more athletic team, while Our Savior Lutheran would have to lean on their size in the half court to create quality scoring opportunities.

The first eight minutes ended with Seaford down 13-14. Our Savior Lutheran struggles offensively in the first quarter carried over into the beginning of the second as Seaford took a downhill approach and pushed at every opportunity. Just when it appeared as though Seaford was pulling away, the Falcons picked up their own intensity level in the last two minutes of the half and ended up taking a two point lead after falling behind by 8. 35-33, Falcons at the half.

The Bronx squad carried their offensive success into the third quarter, scoring almost at will as the Blue Jays came out struggling to find their own offense. Through all the ups and downs of the quarter, Seaford hung tough and ended the quarter down only 51-56. The defensive changes Our Savior Lutheran made at the half paid dividends in the 3rd as their zone press slowed down the Blue Jays athleticism and created easy baskets in transition at the other end.

The Falcons’ size and defensive changes they made at halftime highlighted the Blue Jays lack of size and stifled their athletic ability. What was once a fast-paced up and down game in the first half became a half court contest in which Seaford lacked any consistent offensive continuity. The Falcon press wore on the Blue Jay Ball handlers and what was 5 point lead ballooned to an 85-74 win for Our Savior Lutheran. 6’8 Sadiku Ibine Ayo for the Falcons led all scorers with 25 points on 11-19 shooting from the field while Ricketts had 22 and Fortune had 23 for Seaford.