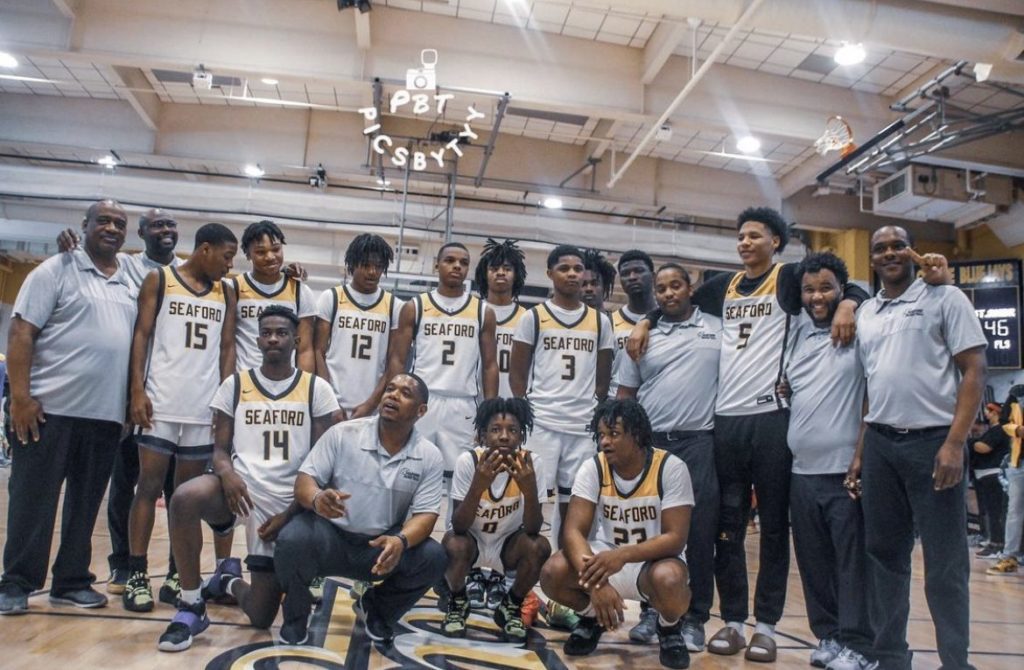 Fourth year head coach Vince Evans was a senior in 1997 when the Blue Jays won the program’s only state championship in boys basketball. He now has Seaford one game away from a return to the title game as they defeated St. Andrews 70-46 in front of a sellout crowd at Ben Sirman Gym Saturday.

The 10th seed Jays will face #3 Tower Hill next Thursday in the first semifinal game at the Bob Carpenter Center in Newark. Tip is scheduled for 6:30. Top seed Salesianum faces off against #4 Howard in the nightcap.

Seaford beat the Hillers 69-55 back in December. These two met last year in the quarterfinal round with Tower Hill winning 56-25. That was the deepest run for the Blue Jays in the tournament since the ’97 championship.

In Saturday’s quarterfinal, St. Andrews committed 20 turnovers (mostly on traveling calls) as the Saints struggled against the Jays pressure defense. Seaford led 14-7 after the opening quarter, and held a 15-point lead late in the second when the Saints closed the half on an 8-0 run to make the halftime score 26-19 in favor of the Blue Jays.

A 14-3 run to start the second half propelled Seaford to a dominating performance over the final 16 minutes as St. Andrews fought hard but could not threaten the home team.

Junior Brent Ricketts led Seaford with 24 points (18 in the 2nd half), freshman Kashmeir Wise chipped in with 17, and senior Wesnel Romain aded 11. Romain started the game in place of the injured Tyrese Fortune who suffered a minor leg injury in the opening tournament game against Tatnall. Coach Evans hopes to have Fortune cleared for the Final Four.

Frank Koblish scored 21 points to pace the Saints as their season came to an end with a final record of 15-8.