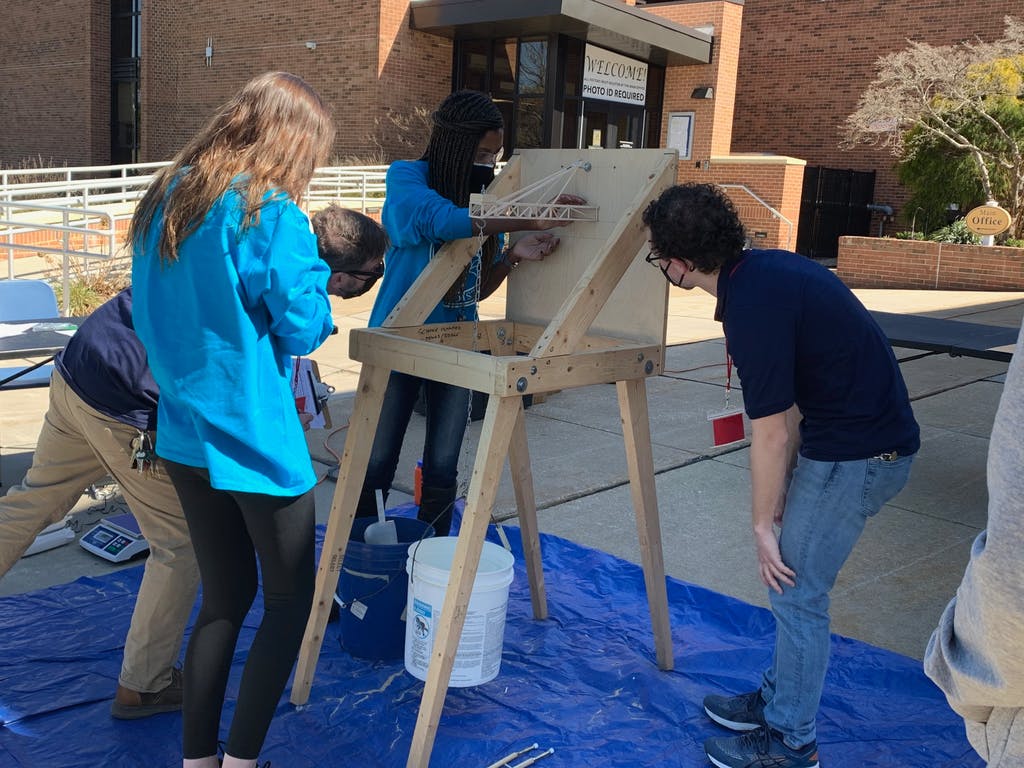 When you move a science competition outside, there’s all sort of real-world conditions that pop up that you’d never have to contend with in an indoor setting.

Rockets that get caught in trees, not gym rafters.

Planes that land on roofs that wouldn’t have been there.

Parking lots that slope down to allow rain to run off, but throw a monkey wrench into the pain-staking plans contestants made for vehicle performance using their own level driveways or garages.

But none of that put a damper on Sunday’s Delaware Science Olympiad build event competition held at H.B. DuPont Middle School. The gorgeous spring weather was a huge bonus, even if the trees wouldn’t get out of the way.

Gordon Lipscy, state director of the program, said he enjoyed having the building events outdoors. But he also noted he wouldn’t have been quite so happy Sunday if it had been cold and dreary.

The Delaware Science Olympiad usually is held at Delaware State University in Dover in two sessions, one for middle school and one for high schools. Both include written tests that check knowledge of a certain aspect of science, ranging from material density to the trees of Delaware, and building events that include making Rube Goldberg-like machines or creating cars that are built for distance or hitting a specific target.

This year and last, the COVID-19 pandemic forced Science Olympiad to switch to online test taking and social-distanced in-person building events for both the middle-school and high-school division.

Sunday’s events were open to all 60 state teams, but mostly New Castle County teams showed up. Many team members do multiple events, but about 90 individual performances in seven events took place over four hours. In contrast, the usual indoor events drew 900 students.

Cab Calloway School of the Arts seniors Julia Nelson and Trinity Hunt carefully installed a V-shaped balsa-wood ledge on a backboard for the Boomilever competition. It requires them to build the device, then hang a bucket from it and fill it with sand. The piece that takes the most sand before breaking is the winner.  Their piece, built and rebuilt by Hunt, lasted for quite some time.

Nelson, who is on Cab’s leadership team, said it’s lot of fun to see the design and how its improvements work. She’s medaled in multiple events and plans to study biology, possible at Ave Maria University in Florida, but hasn’t yet fully committed.

Hunt, who plans to go to Pace University in New York because she likes their acting program, said she really enjoyed being a part of the Science Olympiad team, even though a science career in not her goal.

“I think it’s important to have Black females competing in science,” she said. “I like the representation.”

While they enjoyed the outdoor competition, Nelson said she would have preferred the typical indoor one, which people could bond with their own teams and meet other teams, too.

Appoquinimink High School senior Edward Cierniak and sophomore Johnny Sygowski spent a fair amount of time Sunday recalibrating the car they built for the Gravity Vehicle competition to account for the slope in the parking lot. The event requires competitors to build both ramp and car.

“It’s definitely a challenge, especially on a surface like asphalt, so that can impact our runs,” Cierniak said.

Their third shot landed the car one inch off the bullseye, which is hard to do even on the level basketball court at DSU.

Johnson said the key to preparing for the building events is to test a lot.

Cierniak is heading to the University of Delaware in the fall to study political science. Sygowski plans to go to UD and study mechanical engineering. Both did other events, too.

Krish Goswami, a senior at Appo, got to watch his Ping Pong Parachute land in a tree. Lots of coaches and other participants commiserated.

In that event, kids afix a small box on top of a rocket, and in that box they place a ping pong ball attached to a parachute. The goal is to shoot a compressed-air rocket up, have rocket itself fall back, but the air lift the parachute and ball. The descent of the ball is timed. There are many points of failure, from bad aerodynamics on the rocket itself, to a parachute that launches early, to a parachute that fails completely. Indoor rules disqualify a rocket if it hits the gym ceiling.

Goswami is headed to UD and plans to earn a degree in biology. But he didn’t do any of the biology-related events in Science Olympiad.

Even so, Goswami said, “It’s a great program, and it’s an honor just to be here.”

The kids will find out who medaled and who didn’t in a Zoom call. And the outcome is not just vanity. College applications ask if kids participated in Science Olympiad and, if they did, whether they earned 1st, 2nd or 3rd place medals.

As the Appo team broke up and headed away, Lipscy was hailed by Edward’s father John, who is one of Appo’s coaches.

“Thank you for holding this event to bring some normality to this year,” Cierniak told him. “One last trip with my son on the carousel.”