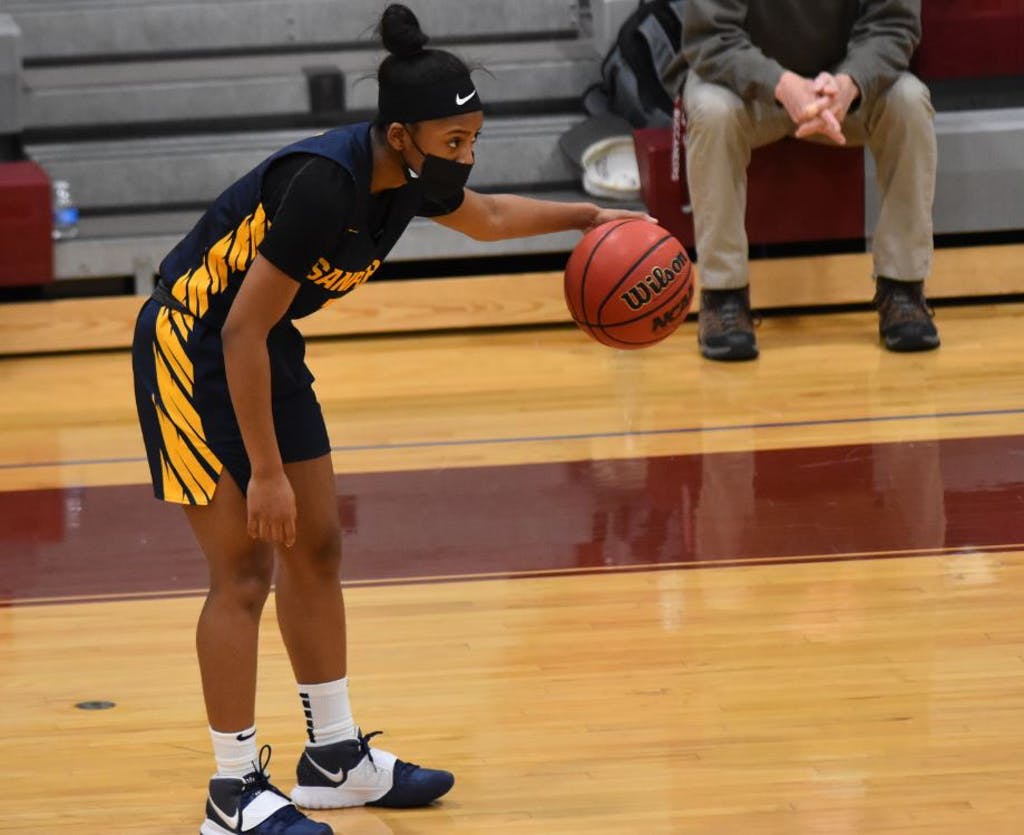 Azareya Kilgoe of Sanford looks for an opening during Caravel game

In a game of shifting intensity, Sanford School’s girls pushed past a tie with Caravel Academy at four minutes to go to win, 56-50.

Sanford entered Monday’s game with a 9-1 record while the Lady Buccaneers came in with a 5-3 one. Both teams looked to push the ball early in the game as the Warriors built an early 16-6 lead.

Caravel played tough but struggled to find any sort of solid half court offense. Sanford extended their defense to half court making it difficult for the Buccaneers to get into any sort of offensive flow.

Sanford then capitalized on a number of low percentage shots and turnovers by Caravel late in the first to secure an 18-9 lead at the end of the quarter.

The Warriors continued to play tough defense at the beginning of the second quarter. Caravel struggled to find consistent offense as their guards had difficulty advancing the ball up court and found themselves again settling for outside shots.

Sanford pushed the pace, including securing a number of offensive rebounds that resulted in field goals. Amiya Carroll ended the half knocking down a corner 3 once again, extending the lead to nine. It was 32-21, Warriors at the half. Carroll led all scorers with 14 points.

Caravel came out to start the second half with a renewed sense of intensity, making two 3-point field goals early in the quarter, and closing the gap. But Sanford would answer back getting inside the Buccaneer defense for layups and passes that resulted in easy scores.

Caravel would bring it to within 5 points at the 1 minute mark of the third only to see Sanford’s Carroll drain a three point basket with 2 seconds left in the quarter.

The pace of the game continued to favor the Warriors at the beginning of the 4th quarter. Caravel guards struggled to stay in front of Sanford ball handlers. When the Buccaneers did secure a rebound or force a turnover, they had a difficult time capitalizing at the other end, missing shots close to the basket.

Despite their poor shooting, Caravel was able to pull to within 3 points, forcing the Sanford coach to call timeout at the 5:41 mark of the fourth quarter. Caravel tied the game 45-45 with four minutes to go,  only to see Sanford pull ahead again to win.

Sanford received contributions from a number of players including Amiya Carroll who led all scorers with 17. India Johnston led Caravel with 16.

Sanford will play Wilmington Friends next on Wednesday and Caravel will travel to Delmarva Christian Thursday.