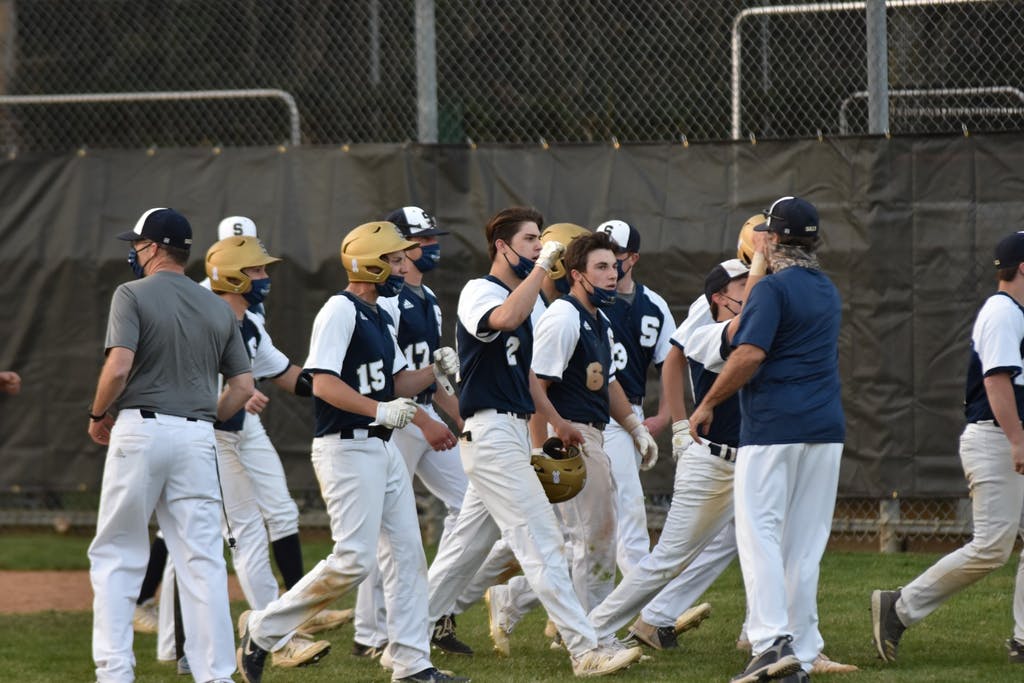 Salesianum celebrates after a 6-5 victory

They played a full nine at Salesianum on Thursday afternoon.  Two extra innings were needed to determine the outcome between #4 Salesianum & #1 Appoquinimink.  The Sals walked it off with a sac-fly by

to dead center-field for a 6-5 victory in an amazing back & forth game.

This game had it all if you were a baseball fan.  At times there was dominant pitching, great situational baseball, clutch hitting, and a few web gems as well.

First pitch started sharply at 4pm, with Brody Valentine on the mound for the Sals.  He would struggle with command in the first, hitting a batter & walking two others, while giving up two early runs to the Jaguars.  Valentine would toss 54 pitches in the first two innings, but would settle in, eventually leaving after a lead-off single in the 5th inning. 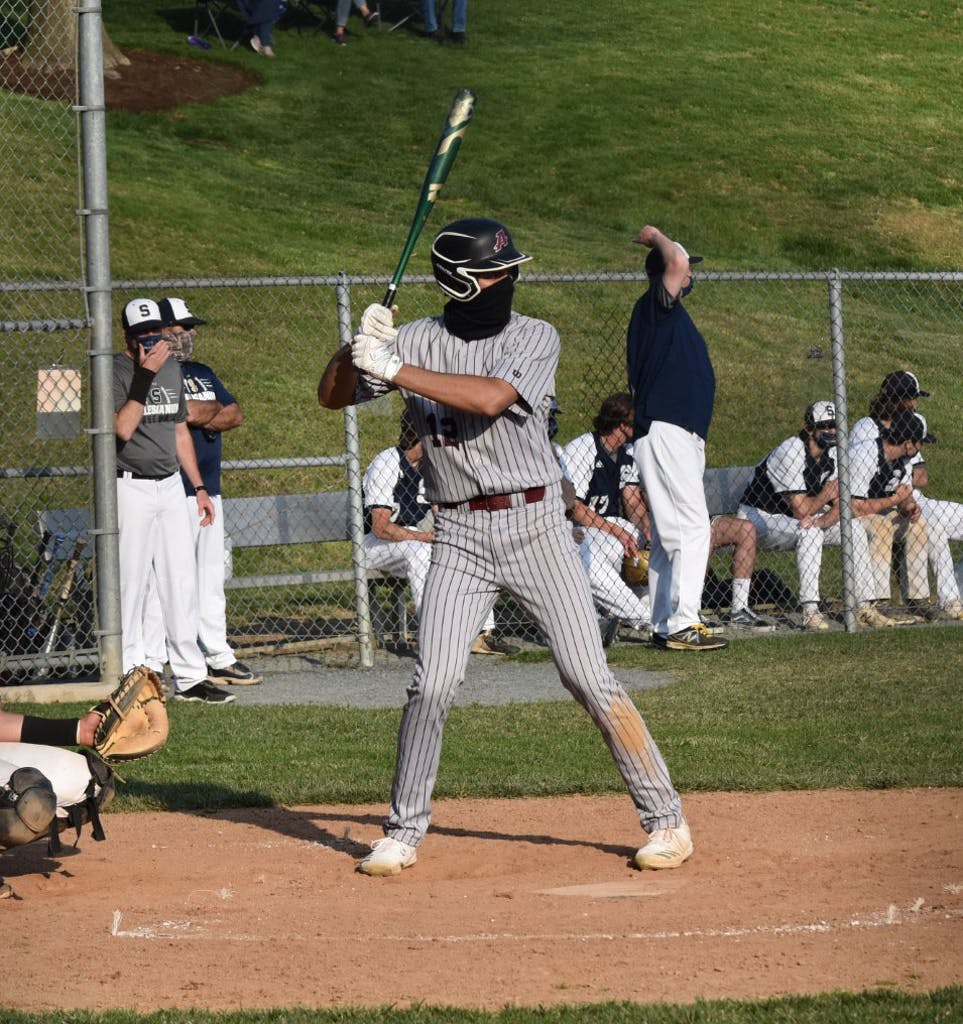 University of Miami commit Lorenzo Carrier impacted the game offensively for the Jags.  He smoked a line-drive single past Salesianum third baseman, Ryan Rzucidlo in the first inning, plating Appo’s first two runs.  He would reach base in every plate appearance for the remainder of the game in almost every way possible, an infield single, walk, hit by pitch, and an intentional walk.

It remained a 2-0 ball game until the fourth inning, when the Sals put together a two-out rally.  The 8 & 9 spot hitters in the Sals lineup, Ryan James & Luke Swift reach base with a walk & hit by pitch respectively.  That brought up the Sals leadoff hitter, Brian Lang, who ripped a 1-2 pitch that almost reached Broom Street!  Lang would make it home without a play for the 3-run bomb that gave Salesianum their first lead at 3-2.

After the dinger, Jaguar hurler, Evan Bouldin would lock in & retire 7 his last 9 batters before reaching the 105-pitch limit after 6 and two-thirds innings.

In the top of the 5th inning, the Jags would put together an inning to tie things up.  Chad Lawrence led off with a single, which was followed by a pinch-hit walk by Kory Pritchard.  After two outs were made, the 9-hole hitter Austin Prior worked the count full before stroking a single through the middle of the infield to tie the game at 3.

The score would remain the same through regulation & we were off to extra innings.

The 8th inning started off with a bang.  The Jags lead-off batter Miller stroked a single, followed by a triple in the left field gap by Aidan Fleming.  Appo was fired up & with good reason.  Carrier was intentionally walked before a second pitching change for the Sals brought in Ryan James.

Carrier took off for second, and Evan Bouldin ripped a line drive into shallow right field.  Trying for a hit & run.  Carrier lost track of the ball & right fielder, Conor Campbell was able to track down the fly ball and double up Carrier at first.  Fleming was stuck at third with the line drive being too shallow to tag up on the play.  Lawrence struck out looking in the next at-bat & a huge opportunity for the 2019 champs to blow this game open was shut down.

In the bottom half of the inning, Ben Venema reached base and nearly got picked off by left hander, Chase Fleming.  Fleming threw the ball over to first baseman, Aidan Deakins, who ended up hitting Venema in the back with the throw.   A few batters later, Campbell stroked a single up the middle to tie the game at 4, and there was more baseball to be had!  On the ninth we go! 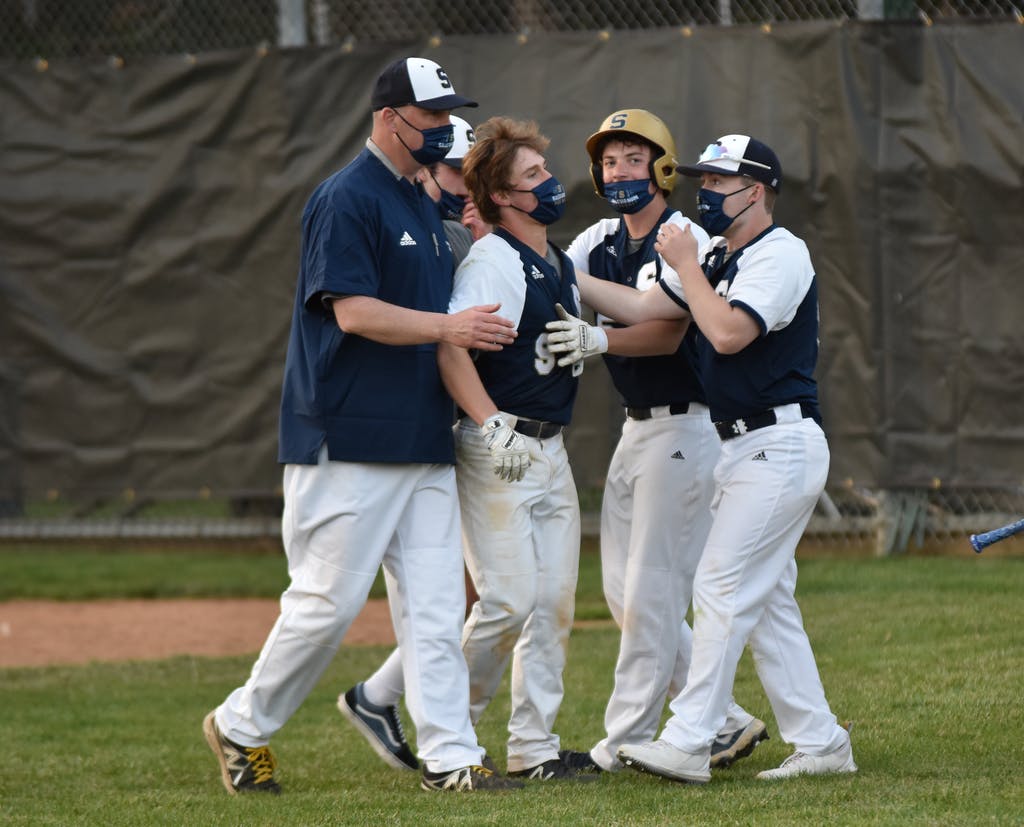 Sallies Ben Venema is greeted after his walkoff sacrifice fly

After Appo added another run in the top of the inning, the bottom of the ninth was a wild one.  Lang led off the Sals half of the ninth with a single.  Valentine laid a beautiful bunt down the third-base line.  A poor throw allowed Lang to score all the way from first to tie the game & left Valentine at second base.  Dunion followed with a sacrifice bunt that Appo didn’t rotate their infield with and was able to reach first without a throw.  The Jags would intentionally walk Rzucidlo which set up Venema for the game winning sac-fly.

The Sals move on to 3-0 and will take on Sussex Tech on Saturday, at Frawley Stadium.  First pitch is set for 3pm.

Appoquinimink fell to 2-2 on the season, with their next game returning home on Saturday to take on Sussex Central.  First pitch is set to happen at noon.