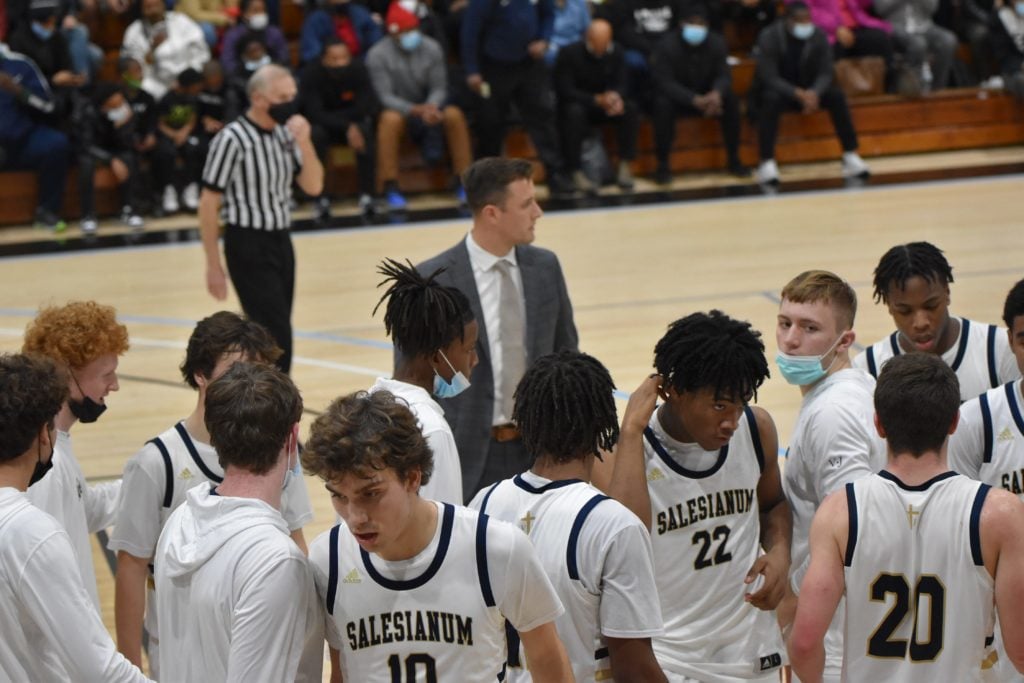 The William Penn Colonials visited Sallies Saturday night in what was one of the most highly anticipated match-ups of the 2021-2022 boys’ basketball season thus far. The Colonials came in with a 9-1 record with their only loss coming to Middletown. Sallies on the other hand started the game with a 2-6 record with all of their losses coming from out of state opponents including Roman Catholic, Imhotep Charter and Neumann Goretti.

Sallies came out strong early. Despite sophomore guard Isaiah Hinson being unavailable for the contest, the Sals ran out to an early 17-7 lead 5 minutes into the game. William Penn struggled to find their assignments on the defensive end throughout the quarter which led to a number of open 3-point shots for the home team Sallies. 23-12 at the end of the first. The size differential between the two teams became more apparent at the beginning of the second quarter. Justin Molen and company for Sallies controlled the glass at both ends and their ability to see over the Colonials’ defense led to a number of made 3-point shots after skip passes over top of the defense. Despite the defensive struggles, William Penn kept the game within 10 points at the end of the half due in large part to their own 3-point shooting as junior Jalen Sample knocked down a number of timely shots from deep just when it looked like they were struggling to find offense. Justin Molen led all scorers at the half with 13 points including two 3-pointers within 10 seconds of each other right at the end of the half.

The 2nd half started with neither team able to produce any continuity offensively. Despite the strong effort and hard play by both teams, the basket seemed to have a lid on it metaphorically speaking. William Penn continued to attack but were unable to convert their high intensity approach into points except at the free throw line. They created a number of turnovers in the quarter but were unable to put the ball in the basket on what were low percentage attempts. #5, Jalen Sample continued to be the only consistent source of offense for the Colonials, knocking down 2 three-pointers in the quarter, including a 23-footer at the buzzer. The quarter ended 55-47 Sallies.

William Penn stayed the course deep into the 4th, trailing only by 5 with 3:30 to go. The game continued to slow down a bit as both teams found themselves in the double bonus halfway through as the physical play intensified. Sallies continued to be led by Justin Molen. Being a solid 6 inches and 20 pounds larger than anyone else on the court, the senior was able to find his teammates, secure rebounds and be a calming presence for Sallies as the momentum shifted heavily in the Colonials’ favor.

Molen would pull Sallies across the finish line with a victory keeping William Penn at arms-length in the end. The Colonials were just never able to rebound from Sallies’ quick start in the first quarter. The 3-point shooting that Sallies received from a number of players was only matched by Sample on William Penn as they were unable to secure consistent offensive in the second half from anyone other than #5. Sallies earns only its 3rd win of the season as they now come up on the part of their schedule that includes mostly state teams. William Penn will look to get back in the win column on Monday against St. Benedict’s Prep in New Jersey.