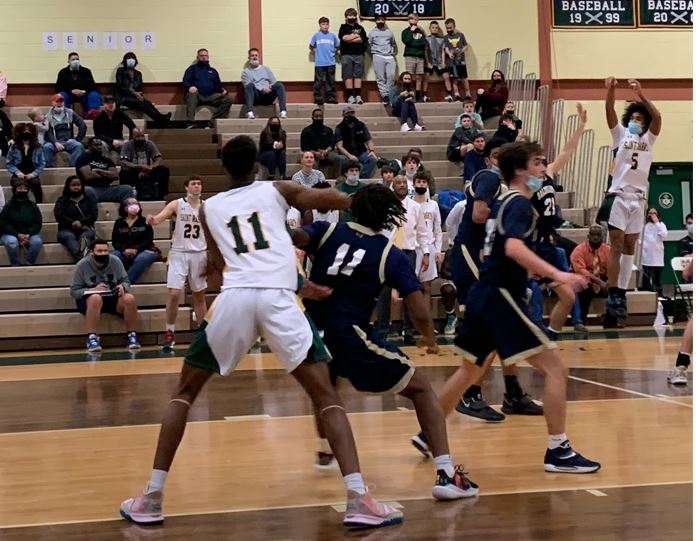 The St. Mark’s Spartans hosted Salesianum Friday night in a late regular season match-up between two teams looking to improve on their 8-7 records as the post-season approaches.

With 6-foot-6 senior swingman Justin Molen out, Salesianum looked out of sorts offensively on the majority of their first quarter possessions, missing free throws and open shots that they typically make.

Despite looking more comfortable in their home gym, the Spartans were equally unable to produce good looks at the basket and ended up turning the ball over on a number of their own 1st quarter offensive possessions. Sallies ended the quarter on a 6-0 run to take a 10-3 lead.

The beginning of the second quarter saw Sallies come out in a zone press that significantly slowed down the already stagnant Spartan offense. Then with one minute to go in the half, St. Mark’s forced three straight turnovers leading to what was a clear momentum shift in favor of the Spartans.

However, a two-handed dunk by No. 11 Jabri White and another lay-up were the only baskets the Spartans could come up with.

The half ended 14-12 Sallies in what was more of an offensive struggle for both sides than a display of strong defense.

The energy that St. Mark’s ended the half with carried over into the beginning of the third quarter as Spartans went on an 8-2 run to take a 20-17 lead.

Five minutes into the quarter the momentum was clearly with the Spartans as they forced a five-second call on a Sallies ball handler. Despite all the energy in the gym, St. Marks only led by three points.

The last three minutes of the quarter ended with the two teams trading baskets including a 3rd quarter buzzer beater by St. Mark’s No. 5 PrinceMessia DeWitt from 15 feet out to send the crowded into another frenzy.

Although the scoring remained sluggish, the energy and intensity level of the game pick up in the 4th quarter.

St. Mark’s continued to force the Sallies underclassmen into turnovers and executed offensively at their own offensive end knocking down two three-point shots in a row to maintain a small lead coming out of a Sallies timeout with 3:38 left.

Regardless of the outcome, the combination of the pro St. Mark’s crowd and the absence of senior Justin Molen seemed to weigh heavily on the Sallies squad.

With both teams in the double bonus, Sallies found themselves down only 3 points with 17.9 to go and possession of the ball.

Sallies’ Kareem Thomas found himself on the free throw line shooting three with seven seconds to go in the game after being fouled on a three-point shot from the corner. Thomas made all three to tie the game at 42 apiece. St. Mark’s would fail to get off a quality shot at the end of regulation giving the crowd four minutes of extra basketball.

Sallies perseverance paid off in the overtime period. The visiting team immediately went up by four points in the first minute and never looked back.

Shooting six for eight from the charity stripe in OT extended the lead to 53-45 with 35 seconds left.

Despite the strong home court advantage, St. Marks conversely shot just three of 10 from the free throw line in the 4th quarter and OT combined and were unable to create any offense in the half court.

Both teams now have four games left on their schedule, including a regular season-ending contest for Sallies against Howard next Saturday night at 7:30 p.m.