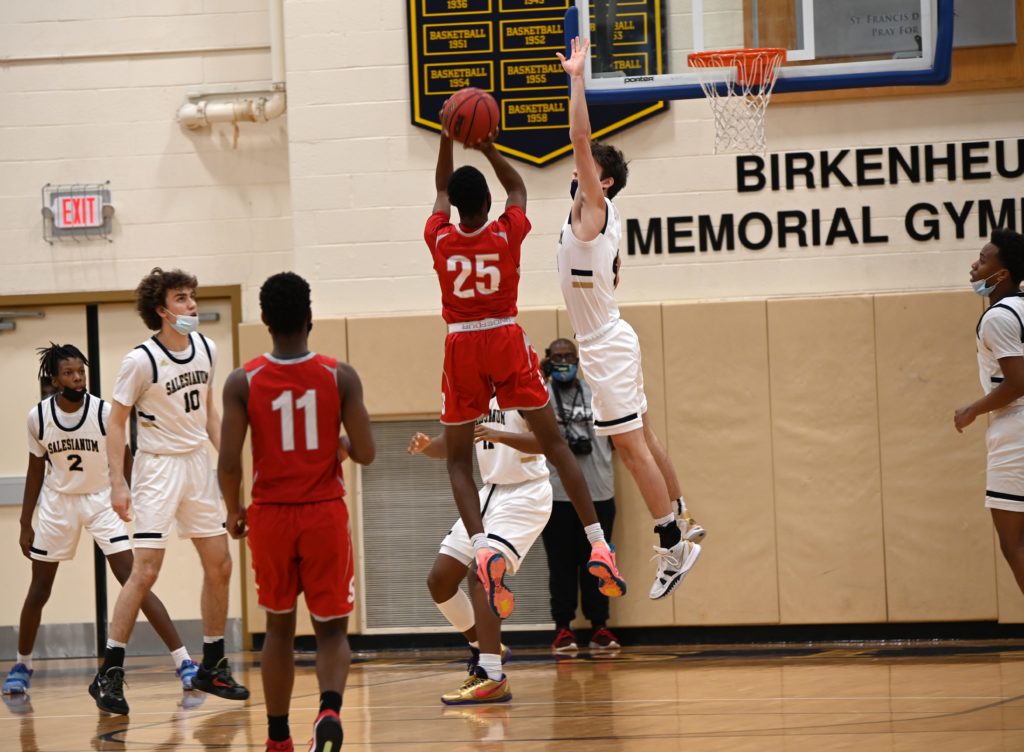 The Smyrna Silver Eagles visited Salesianum Friday afternoon for a mid-season matchup between two ranked teams with good size and athleticism. The game started with both teams struggling offensively. Despite their efforts, Sallies missed a number of open lay-ups and appeared out of control at times. Smyrna ran out to an early 7-2 lead but looked equally out of sorts offensively due in large part to the Sallies guards pressuring the ball just across half court. As the quarter ended both teams settled in a bit and found a rhythm. 11-10 Smyrna at the end of the quarter.

Sallies came out to start the 2nd quarter on fire. The first 3 minutes of the quarter saw the home team make four consecutive 3-point shots and a few 2 pointers for good measure. Smyrna lacked any answer at both ends of the court, turning the ball over on multiple possessions and unable to stop penetration in the lane after closing off the Sallies 3 point threat. The Silver Eagles hung tough though and went into halftime only down 35-21, scoring on a few possessions late in the quarter. The home crowd and possibly the excitement of the snow on the ground outside fueled an inspired Sallies team throughout the half, winning almost every loose ball and sharing the basketball just enough through the first 16 minutes of play.

The quality of play by both teams picked up to start the 3rd as Smyrna came out with a more inspired style of play to match the home team’s intensity. The Silver Eagles fought for every loose ball and contested every shot forcing Sallies to work much harder in order to secure a good look at the basket. Sallies held tough however, only allowing Smyrna to get within 9 halfway through the quarter. 48-35 at the end of the 3rd.

Smyrna carried their intensity level in the 4th quarter but was unable to make any headway. The 13 point lead for Sallies ballooned to 20 points at times as their balanced attack proved to just be too much for the Silver Eagles. Sallies played arguably their best game of the season as five different players made 3-point shots in the game and 4 players scored in double figures. #24 Dariyon Williams led the way for Sallies with 14 points, making hustle plays and securing tough rebounds under the basket. Isaiah Hynson also added 14 for the home team. Smyrna’s Gregory scored 21 points in the loss. Sallies won the contest 69-46 as they look forward to Appo. Tuesday evening.