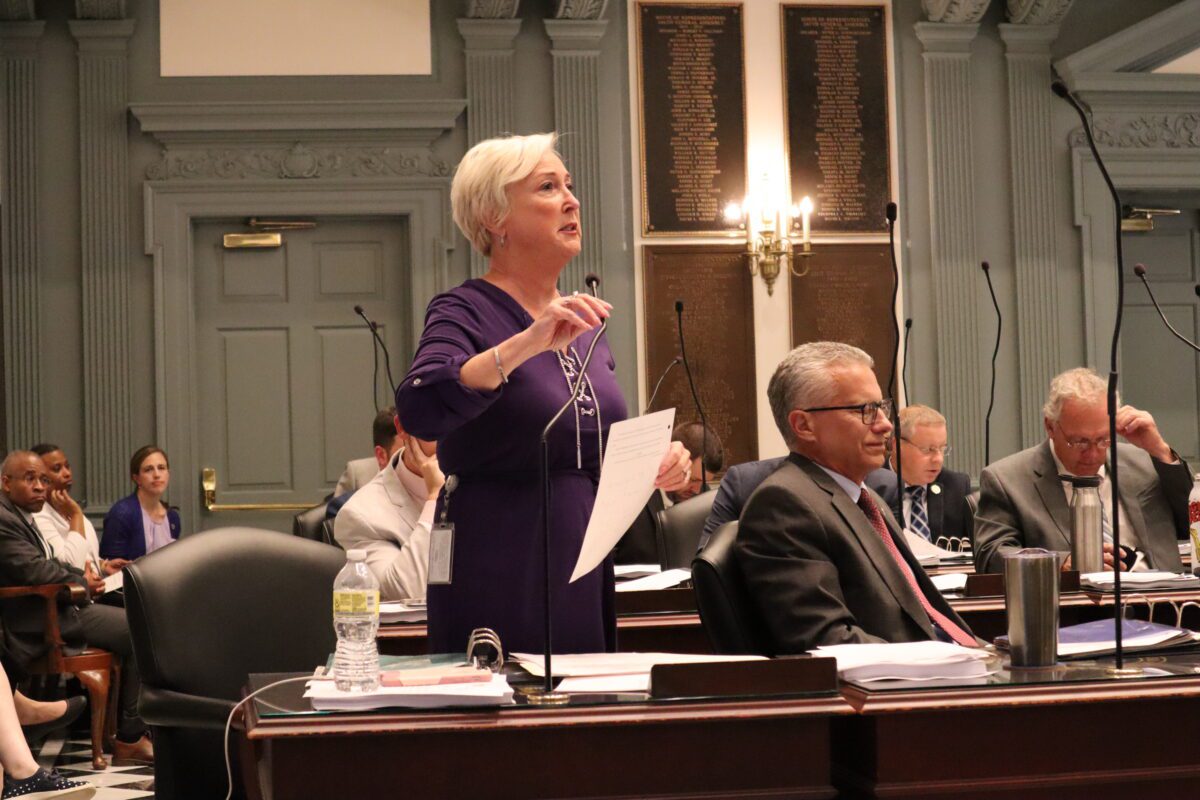 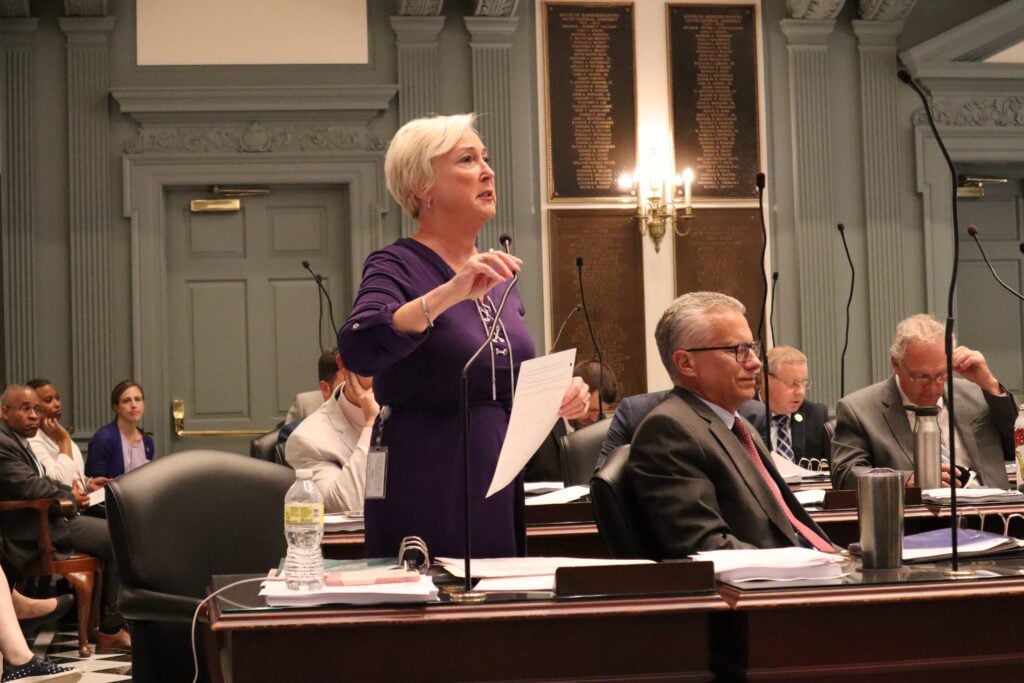 It’s not uncommon for state Rep. Ruth Briggs King to be the only woman in a room full of men.

The Georgetown lawmaker is the only female legislator in Delaware’s General Assembly who belongs to the Republican Party.

She doesn’t let that get in the way of representing her constituents.

In fact, she sees it as an opportunity.

“There have been numerous times when I have had to bring up what the guys didn’t see,” Briggs King told Delaware LIVE News.

“You don’t know what you don’t know, so we can be talking about healthcare and you might not understand there’s a need for additional women’s health services or pediatric services because, well, you’re not a woman.”

Her comfort speaking out for women’s issues even when she’s outnumbered comes from a philosophy she’s carried her whole life.

“I’ve always gone by the mindset that, to whom much is given, much is expected. I have certainly been given so many opportunities — not just handed to me, but I worked for these opportunities — and I work to live up to those expectations.”

Sen. Brian Pettyjohn, R-Georgetown, who shares a large part of his district with Briggs King, said her presence makes the Republican Party stronger.

“Too often we kind of get caught in our own bubble and don’t recognize women’s point of view in some of the legislation and some of the points and arguments that we make,” Pettyjohn said.

“Having her there as a resource and having her as another voice is extremely powerful. It’s extremely important and definitely valuable.”

Briggs King was recently recognized by women’s lifestyle magazine ELYSIAN, which singled her out for her “unwavering leadership and strengths in organizational development and strategic planning” with “a proven track record to address and solve problems with an end-game of realizing results.”

Who is Ruth Briggs King? 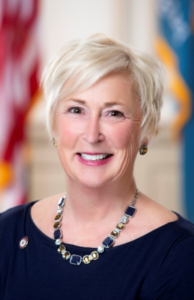 Briggs King has served in the House of Representatives since 2009. Her district, RD 37, spans from Georgetown to just north of Millsboro in Sussex County. East to west, the district stretches from the Harbeson area to Hardscrabble, not far from Sussex Tech.

Prior to joining the legislature, Briggs King was a sort of “Jill of all trades,” working in medicine, education, banking, finance and real estate.

The Del Tech and Wilmington University grad said there was never one moment when she realized she wanted to run for public office.

“I was running around in those circles because my dad had been very engaged in politics and his father before him, so it was just something I always saw as an opportunity,” she said.

In 2006, Briggs King became CEO of the Sussex Association of REALTORS, a job that frequently landed her at Legislative Hall to advocate on behalf of housing issues.

“I think for me, being in Leg Hall and working on issues, I watched some of the folks up there and I thought, I could do this, and I could really bring a lot to the legislature,” she said.

Much has changed since she first entered public office. The biggest difference between now and then, she said, is the level of polarization that exists, even at the local level.

“Back then, you were either a Republican or you were a Democrat, and you had a few philosophical differences,” she said. “But over the years, we started hearing the terms ‘RINO,’ conservative, progressive, liberal.”

When first running for office, a voter asked Briggs King whether or not she was conservative.

“Well, Republicans are conservative, at least fiscally,” she thought, not realizing that the Tea Party movement would force her to pick sides within her own party.

But for Briggs King, the reason she’s a Republican is simple.

“I firmly believe that I want to give people a hand up, not necessarily a handout, and I care strongly about the community,” she said. “I want people to have the personal right to make personal choices and so naturally, I want less government intervention and more power with the individual.”

Briggs King has always been of the mindset that, in order to get anything done, one has to be willing to work with those who have different ideas.

She’s developed a national reputation for doing just that.

“I remember Ruth said to me one day, ‘Jody, because I’m in such a minority position, every single bill I pass is bipartisan — because I would rather have 70% of something than 100% of nothing.’”

Briggs King is the state director of the National Foundation for Women Legislators and chair of its nominating committee.

“She’s just been what we call an active member,” Thomas said. “Last summer, we did a period poverty products drive and Ruth was just wonderful. She came and she spoke, and she brought, I think, two loads of product to donate, so she’s fabulous — and we can always depend on her.”

As the leader of a national women lawmakers’ group, Thomas is passionate about getting more women involved in politics.

“Women are over 50% of the population, so their perspective counts,” she said. “They used to say ‘women’s issues’ and they’d put the women on the children and families committees and things like that, but it’s not that way anymore.

According to the Center for American Women and Politics, female lawmakers make up just 28.5% of the state senators throughout the country and 32% of the state representatives.

RELATED: Melissa Minor-Brown: ‘I stand on the shoulders of giants’

“We had some really good quality women candidates throughout the state this year past and for some reason, Republican women just don’t seem to fare as well in the election process as Democratic women do,” she said.

Briggs King pointed out that Alexandra Reed Baker, a candidate for Sussex County register of wills, won her election, “and she was pregnant throughout most of her campaign and she unseated an incumbent.”

“But I certainly think the party needs to look at what we do and how we do it to engage more diverse and unique kinds of candidates to run for us,” Briggs King said.

Pettyjohn said the party needs to work to ensure every candidate — male or female — has the same access to resources needed to win.

“That way they can get their message out and make sure that people see them not just as a Republican and stereotype them with some of the Republican views that in many cases are inaccurate,” Pettyjohn said.

When the next General Assembly begins in January, Briggs King said there are several issues she’s interested in tackling.

“Sussex County and Georgetown in particular has a very high population of unsheltered and homeless people and a need for workforce housing,” she said.

“Poverty in our area is greater probably than it is in some areas of Wilmington, but Sussex County people just have a bit more for the way they’re located.”

Working to address that concern is her top priority, along with addressing students’ pandemic-caused learning loss and strengthening public safety in Sussex County.

“Those are three heavy lifts I want to look at and, of course, I’m looking forward to returning to the Joint Finance Committee to make sure we’re using the taxpayers’ money wisely and investing wisely for our taxpayers.”