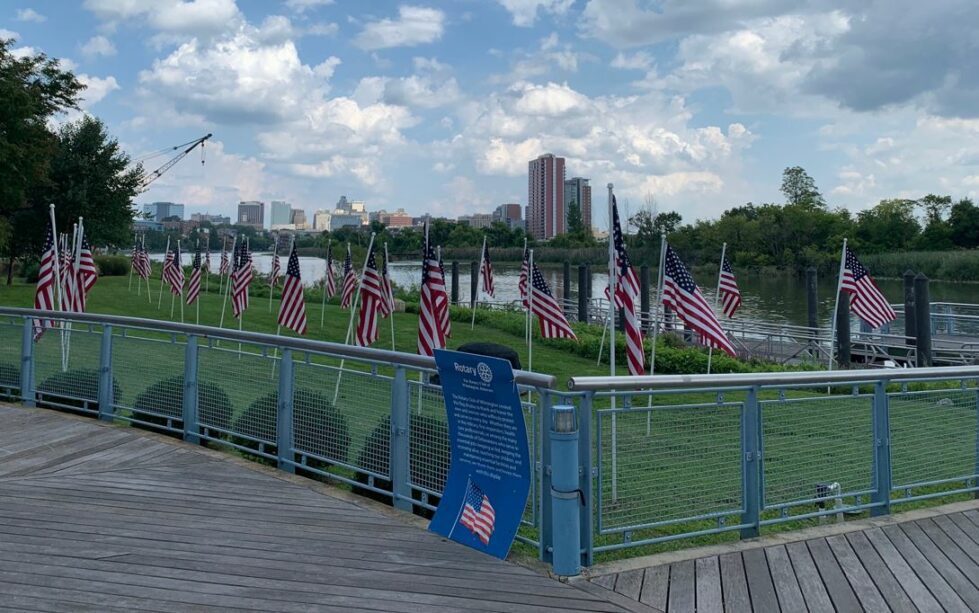 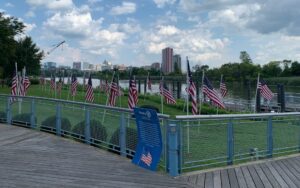 The city of Wilmington rises in the background as Rotary Club flags wave along the Riverwalk.

Hundreds of U.S. flags once again are dancing gracefully along the Wilmington Riverwalk.

Courtesy of the Rotary Club of Wilmington, the Flags for Heroes display is an annual event originally designed to honor veterans and current members of the U.S. Armed Forces.

In 2020, the club expanded those being honored to include first responders, law enforcement officers, teachers, healthcare providers and all other who serve, protect, defend and enrich our lives.

“The motto of Rotary is service above self,” said Club President Jonathan Hickey. “Rotary was founded on that basic principle. And in this case, we wanted to do something that would honor those that we consider to be heroes in the community, and there are heroes in many walks of life.”

The display will stretch over Labor Day and end Sept 19.

The club invited members and others to buy a flag to honor someone they consider a hero, even a personal one, and now owns 500 flags. 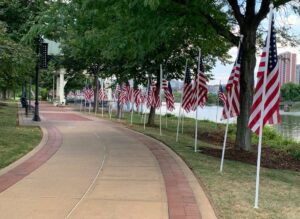 The displays began at Centennial Park near the Hercules building and moved to the riverfront in 2020, a fortunate occurrence that gave people coping with the start of the pandemic something to see during a fresh air outing.

On Wednesday, said flag chairman Kathryn Jakabcin, a team of eight club members and 10 Goldey-Beacom College students hunted through the grass near the walkway for the pole cups sunk into the ground by the Riverfront Development Corp. They put up about 300 then.

On Friday, more members were out installing additional flags as a cloudburst moved through.

The flags stretch from the park near the AAA building to the far side of the Margaret Rose Henry Bridge over the Christina River.

The Rotary Club of Wilmington was founded in 1915 and is the largest Rotary Club in the state. In recent years,  the clubs have advocated for the expansion of early childhood education and joined forces to build the Can-Do Playground for children of all abilities at the Alapocas Run State Park. Rotarians are responsible for maintaining the park.

Jakabcin said she enjoys participating in the flag display and thinks it’s one of the important things that the Rotary Club does.

“When so much negativity has been associated with flags of late and people using flags in poor taste or poor ways or partisan ways to the disgrace of the flag,” she said, “it’s great for us to be able to shine a light on it.”