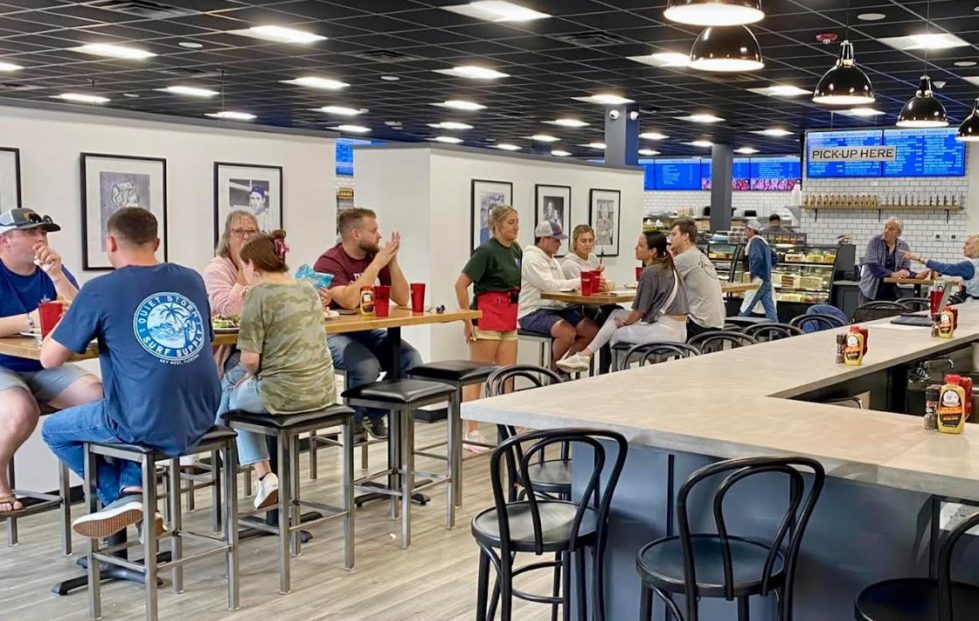 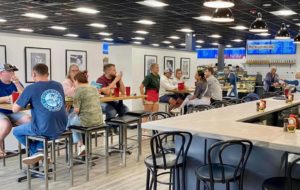 Rosenfeld’s Big Fish in Brandywine Hundred will be a restaurant, bar and market when it’s fully operational. Photos by the Comic Book Shop.

Warren Rosenfeld is asking Brandywine Hundred residents for a bit of patience.

The combination restaurant, deli and market on Marsh Road had a soft opening May 12, and a grand opening is a few weeks off.

“We would have opened three weeks prior to that, but we couldn’t find the staff,” said Rosenfeld, who opened his first eatery, Rosenfeld’s Delicatessen, in Ocean City, Maryland, in 2013.

While still hiring and training, the Plaza III business has been open from 11 a.m. to 5 p.m. That should change.

Likewise, the menu is gradually expanding, the dining room is getting more seats, and a full bar is coming.

In the meantime, there’s plenty to like about the three-in-one operation. 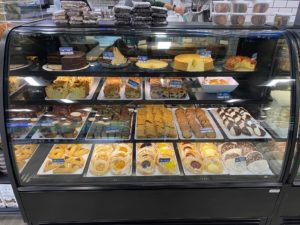 Rosenfeld’s and Big Fish always carried baked goods, and one case will be full of them, including Big Fish’s Peanut Butter Pie. Photo by the Comic Book Shop

The pairing might seem strange if you aren’t familiar with either Rosenfeld’s or Big Fish.

“Why are there live lobsters near kosher rye bread,” Rosenfeld quipped.

In short, Rosenfeld’s and Big Fish Grill are two of the hottest concepts at the beach. Fortunately, Big Fish Grill’s Wilmington Riverfront location has created brand recognition up north.

If you aren’t familiar with either brand, here’s a recap.

Rosenfeld, a retired attorney, repeated his success in Ocean City with a second location on Route 1 between Lewes and Rehoboth Beach. He’d tested the waters first with a food truck, which he sold when the two restaurants demanded too much attention.

Meanwhile, Eric Sugrue is a restaurant veteran. He and his brother Norman started with Big Fish Grill, and the company now has a variety of concepts, including the Trolley Square Oyster House and Torbert Street Social.

Sugrue doesn’t miss an opportunity. For instance, he purchased the restaurants started by the late Darius Mansoory, including Washington Street Ale House.

To expand the Rosenfeld’s concept, Rosenfeld partnered with Sugrue, and they opened Rosenfeld’s Delicatessen in downtown Wilmington. They also have a combo concept in South Bethany.

Surrounded by Sea Colony, an expansive vacation home and rental community, the site was perfect for a second Big Fish Market, Sugrue said. (The first, a slender store, is next to the flagship Big Fish Grill.)

The hybrid Bethany store opened in 2021 and was an instant hit. Due to the pandemic and staffing issues, the full-service restaurant area is only now available. 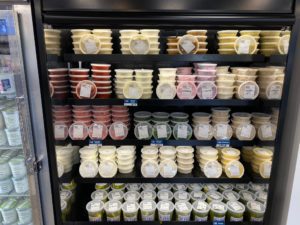 Cases at Rosenfeld’s Big Fish are brimming with all kinds of products, including cheese wedges and stacks of Di Bruno Bros. spreads. Photo by the Comic Book Shop

The Bethany store is about 1,800 square feet; the Brandywine Hundred site is 4,600 — a blend of the old restaurant Goat and a former paint store.

To put it bluntly, that’s a lot of space to fill. Cases are brimming with neat cheese wedges and stacks of Di Bruno Bros. spreads. Tartar sauces, pickled ginger, cream cheese and pickle spears are all packed and ready to grab.

Rosenfeld’s has always carried a large selection of desserts, and Big Fish has its own bakery. So, suffice it to say that your resolve will wilt when faced with a case of layer cakes, cheesecake and Big Fish’s famous peanut butter pie.

In Bethany, the partners learned that many people also want practical items, such as white bread, milk and butter, so those items will be available. 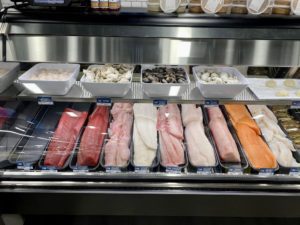 A good pastrami on rye

Admittedly, many come for the Jewish goods: knishes, stuffed cabbage, borscht, brisket, corned beef and pastrami. The items are all dishes from Rosenfeld’s youth.

When he was growing up in the 1960s, his family spent Friday evenings at Hofberg’s, a kosher delicatessen and sandwich shop.

On Sunday mornings, the family went to Posin’s, a bakery and deli known for takeout.

“We didn’t go every Friday and Sunday, but looking back 50 years later, it certainly seems that way,” he says.

This is the inspiration for Rosenfeld’s. But it’s not a literal translation.

One customer complained that Rosenfeld’s was no Jack Lundy’s, the Wilmington deli that opened soon after World War II and moved from downtown to Miller Road before closing.

But remember, Rosenfeld’s Delicatessen was born in the resort area, where tourists want cheese on a hotdog, regardless of whether it’s all beef. Plus, there are Big Fish crab cake sandwiches on the Marsh Road menu.

However, he does want certain aspects of Rosenfeld’s to remind customers of the old landmark.

“We want the Jewish community to be happy to have a place to get a pastrami, Reuben and whitefish,” he said. “They can come on Sunday morning and take home their bagels, cream cheese and lox.”

And if their purchase produces a whiff of nostalgia and puts a smile on their face, that’s good enough for Rosenfeld.