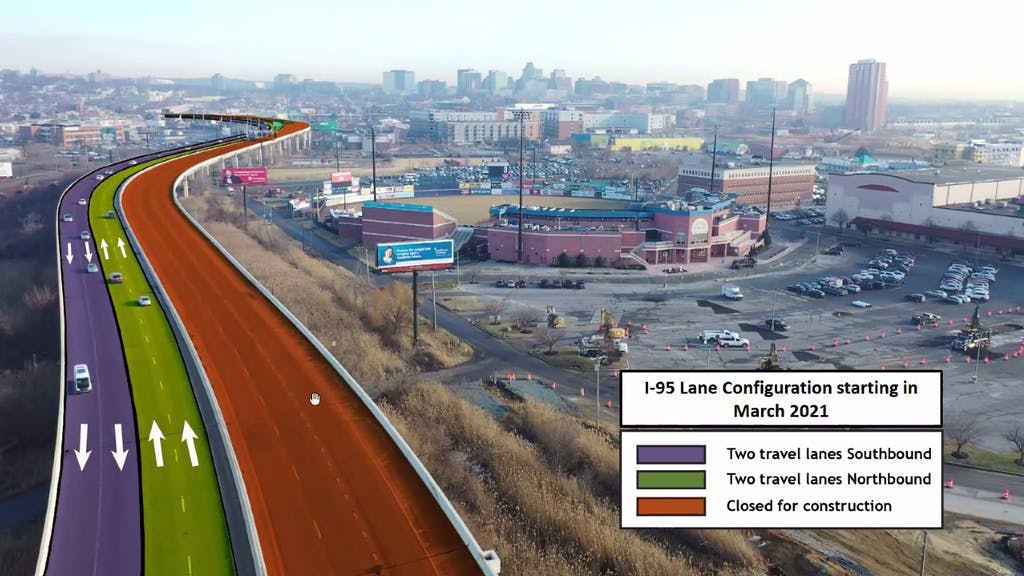 The rebuilding of Interstate 95 in Wilmington is still on schedule to start March 1, officials said Wednesday, even though bad weather has forced adjustments for preliminary work.

And this weekend’s forecast of rain has spurred future adjustments, such as work on the Adams Street ramp.
“We’ve run into a little bit of a bind with weather recently,” said Craig Stevens, DelDOT’s bridge design project manager.

On Saturday morning, contraflow traffic will begin its two-year run, first all traffic running on the southbound side of I-95, and then a year later, all of it on the northbound side.

To encourage more use of I-495, DelDOT is changing a lane at the I-95/I-495 split from allowing access to either highway to send traffic northbound solely on I-495. “It has excess capacity,” Leary said of I-495. “Drivers should use it.” 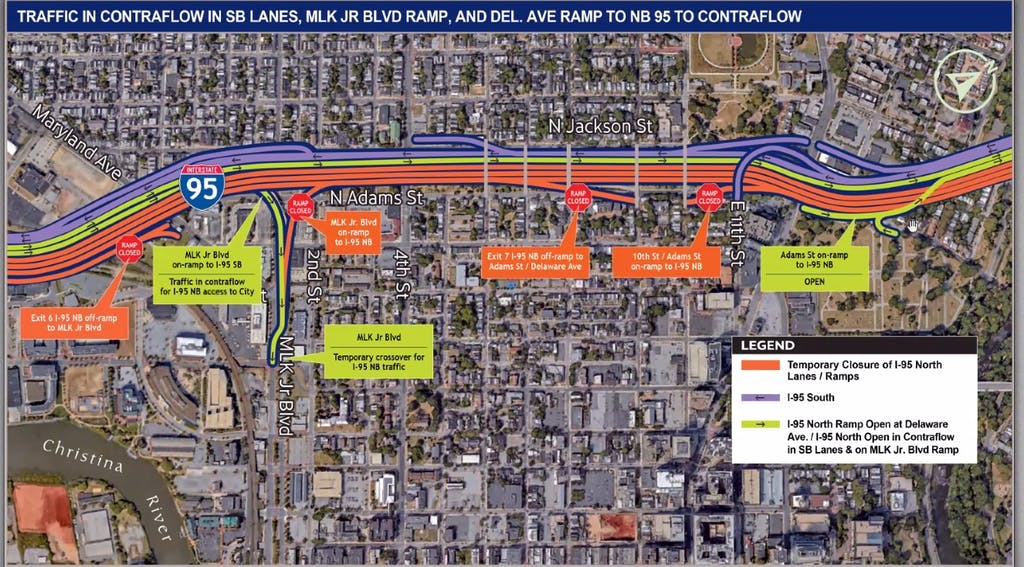 Details of the changes in the initial stage of Restore the Corridor. (DelDOT)

Some improvements have already happened. For instance, DelDOT this week added second turn lanes at 11th and Jefferson streets and 12th and Jefferson to improve flow. DelDOT has taken over dozens of signals in Wilmington and can adjust them in real time to improve traffic flow. That takeover will continue after the project ends. Pedestrian signals will be maintained as is for pedestrian safety, Leary said.

Some improvements are way into the future. For instance, when the corridor is restored, there will be four lanes northbound on the Brandywine River Bridge, giving the traffic entering from Adams Street their own lane, rather than forcing drivers to strain their necks to merge.

The inevitable accidents were a topic of the presentation and the Q&A. Tow trucks will be poised nearby at rush hour and on call at other times. Nineteen scenarios were developed of how to get first responders onto I-95, depending on location. Since some shoulder areas have been taken for traffic, they have created holes in the traffic barrier for access.

Officials promised updates in hearings, on the Restore the Corridor website and on the DelDOT app, which boasts a button generating real-time info about I-95. Data from Waze is incorporated into the app, said Todd Reavis, DelDOT director of technology innovation.

Officials also promoted message boards along I-95 and Route 1 that will show real-time travel times via different routes. They will be closely watching traffic on Routes 141 and 202.