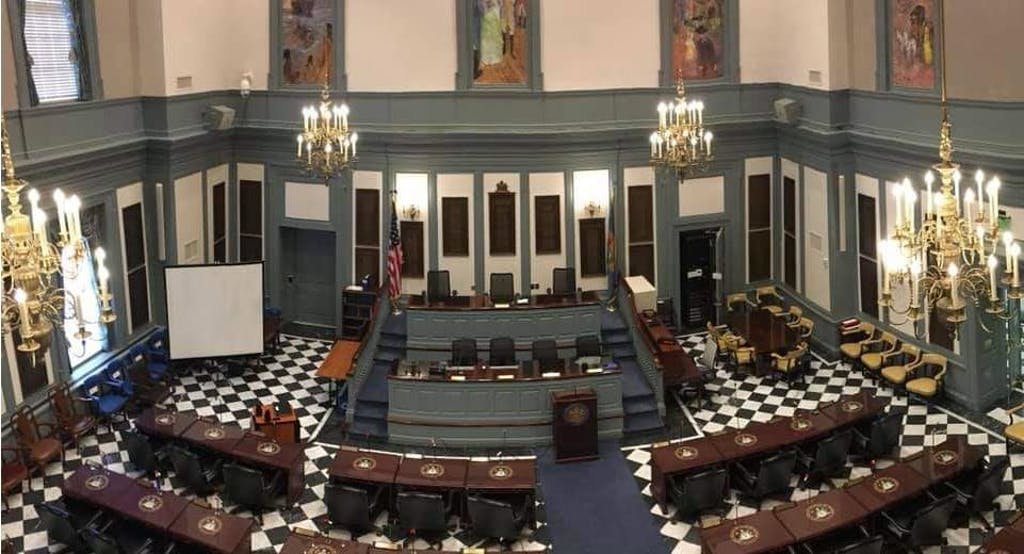 House and Senate Republicans plan to introduced a package of bills and resolutions they describe as election integrity legislation intended to safeguard Delaware’s voting system and improve its efficiency.

State House Minority Leader Danny Short, R-Seaford, said in a press release that the issue of election laws is so emotionally charged, he expects some people to react badly to the proposals without actually reading them.

“We understand that we’re going to hear some criticism about these bills,” he said. “What I’m asking everyone to do is to cut through the rhetoric, read the bills, make up your own mind, and let us know what you think.”

The legislation will be circulated for a week, giving House and Senate Democrats an opportunity to sign onto the legislation as prime sponsors or co-sponsors.

The package comes at a time when voting laws are a hot-button issue nationwide, especially following the 2020 election. That vote saw many states, including Delaware, institute mail-in balloting that was much easier to access than absentee voting, saying it would help those worried about being affected by COVID-19 vote. This year, both George and Florida created new votings rules that conservatives say are common sense, while liberals say they are designed to discourage voting.

Delaware has seen a slew of voting bills from Democrats, which are guaranteed to pass because they control both houses and have a supermajority in the Senate. They include automatic voter registration when a driver’s license is applied for; same-day registration for an election; continuing to all voting by mail and no-excuse-needed absentee ballot voting.

Scott Goss, spokesman for the Democratic Caucus in the Senate, declined to comment about the package of bills.

“Unfortunately, the Republican caucuses elected to send these draft bills to the media before sharing them with their colleagues in the General Assembly,” he said. “As a general practice, we do not comment on draft legislation that has yet to be formally introduced. It would be especially inappropriate to comment on these draft bills, given the fact none of our members have had a chance to review them.”

“The registered voter list is often used by state lawmakers and many others to perform constituent mailings and conduct other public outreach,” said Wilson in the press release.  “Any time I’ve done a mailing using it, I always get back a lot of undelivered pieces.”

Delaware Election Commissioner Anthony J. Albence testified last summer that his agency had about 55,000 undeliverable ballots returned of the nearly 544,000 ballots mailed to Delaware voters.  The number of ballots that were sent to the wrong residence but were not returned is unknown, the Republican press release said.

Wilson noted that one of his constituents told him she received mailings from the Department of Elections, sent to her address, under four different names.  She and her husband have been the only occupants of the property and lived there for 13 years.

While the  National Voter Registration Act contains basic rules and guidelines for maintaining state voter list rolls, it allows states to institute other provisions for the maintenance of voter rolls.

“There is no excuse for not investigating this issue further to learn if there are opportunities for improvement,” Wilson said.

A House concurrent resolution sponsored by Rep. Steve Smyk, R-Milton, Rep. Mike Ramone, R-Pike Creek South, and Sen. Bryant Richardson, R-Seaford, would require the state Department of Elections to review practices used here and in other states for verifying signatures on absentee ballots. After the review, elections officials would be required issue a report on  opportunities for improving Delaware’s verification methods.

“Given the nature of voting by absentee, it’s too easy for fraud to occur.” said Ramone in the press release. “If we’re doing everything right, then we have nothing to worry about, but I suspect there is room for improvement that will give voters the confidence they need in knowing that our absentee voting system is as secure as possible.”

“This is a simple, one-page bill,” said Smyk. “It seeks to have our elections officials evaluate the best practices and technology for determining the veracity of absentee ballot signatures to see if we can improve our process.  Whether it is private industry or a public agency, it is healthy to periodically look at what you are doing and assess if it is still the best way to accomplish your goals.”

A House bill will seek to significantly increase the penalties for those found guilty of voting illegally. The penalty now is a fine of $50 to $200 and/or a prison sentence of 30 days to two years.

The bill sponsored by Rep. Jesse Vanderwende, R-Bridgeville, would make the offense to a Class G non-violent felony. Upon conviction that would sill mean up to two years in jail, but the fine would be a minimum of $1,000 for a first offense and a minimum of $2,000 for any subsequent offense. In addition, anyone convicted would lose the right to vote for five years.

“I don’t think the penalties reflect the seriousness of the crime,” Vanderwende said in the press release. “Illegal voting undermines the public’s confidence in the voting system and that is something we cannot stand for.”

A House bill sponsored by Rep. Rich Collins, R-Millsboro, specifies that those who wish to vote at a polling place have to provide a valid polling place card or one of 13 different types of photo ID.

Any voter who is unable to do that could cast a provisional ballot that would be counted after the Department of Elections matches information provided by the voter against registration records.

“Citizens understand that they have to show ID to do almost anything in the real world,” Collins said in the press release. “One of the biggest responsibilities we have as citizens is casting a vote, and most citizens believe that if you are going to vote you should do so legally.  Without requiring an ID, it is easy to game the system.”

The press release cites a 2018 Pew Research Center survey that said that more than three-quarters of respondents supported “requiring all voters to show a government-issued photo ID to vote.”

The proposal IDs including those issued by federal, state, county and municipal governments, but also by public and private schools, colleges or universities, and Delaware employers.

A House bill sponsored by Rep. Lyndon Yearick, R-Camden/Wyoming, would require voters  to present a form of photo identification to Department of Elections’ staff processing the absentee ballot request. That could include a photocopy of an acceptable form of photo ID, as defined in the bill, by mail. The IDs would match the absentee voting bill and include those issued by various governments, but also include schools and employers.

It is consistent, Republican say, with Delaware’s iVote system, which requires a driver’s license or state identification to register.

“I think it is hypocritical to require one form of ID for voting in-person, but to not require the same for any other channel where an individual can vote,” he said in the press release.