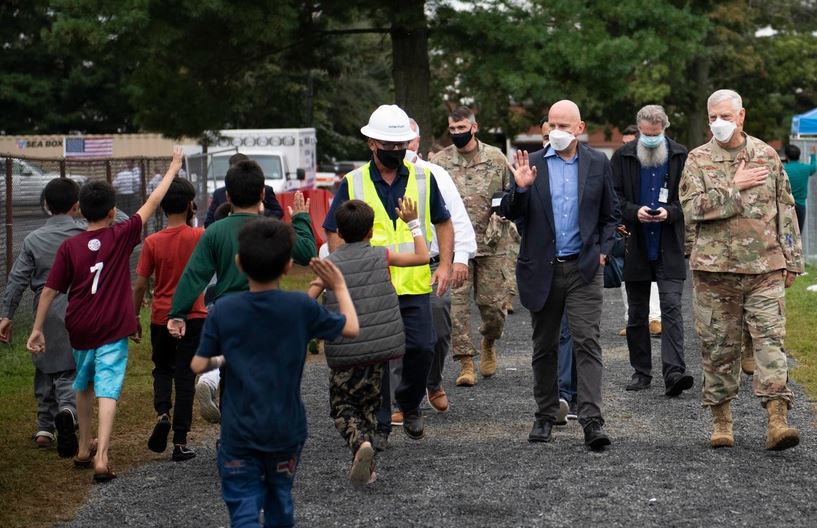 Former Gov. Jack Markell may be pulling 65- and 70-hour workweeks, but he’s doing it from one heckuva swanky address: 1600 Pennsylvania Ave.

As the White House Operation Allies Welcome coordinator for President Joe Biden, Markell spends much of his time talking on the phone, convening and connecting the nation’s nine big resettlement organizations, government agencies and state officials to bring 95,000 Afghan refugees into the U.S. during the next year.

“We’re really in a sprint,” Markell said. “And I think by the end of the year we’ll have done a lot of that important work.”

Biden’s call in early September was not one Markell expected as he was waiting on Senate confirmation as ambassador to the Organization for Economic Cooperation and Development. Markell, who was governor of Delaware from 2009 to 2017, is expected to leave the Operation Welcome job by the end of the year.

He’s working with a small team out of the National Security Council.

In addition, those groups are working with the nine resettlement groups such as HIAS, the Hebrew Immigration Aid Society, that is steering 30 refugees to Delaware through Jewish Family Services in Wilmington. Those families are expected to live in New Castle County, near services they will need.

“The President wanted to make sure that this is not just a whole of government approach, but it’s a whole of America approach, and that’s really my charge,” Markell said.

Those nine resettlement organizations are working with 200 local groups like Jewish Family Services.

“This is a ground up process because those 200 affiliates literally work with the local communities to determine what the capacity of the community is in terms of housing, health care, schooling and so forth,” Markell said. “So the idea is, where can we find housing that would be acceptable, that would be safe and appropriate for that particular family as well as school resources and the like.”

There are already 67,000 Afghanis on U.S. military bases being screened for health and background checks, among other things. Several thousand already have been settled. Another 40,000 are expected to arrive.

Markell said he has not seen a lot of blowback from people questioning why the country is allowing 100,000 foreigners into the U.S. after the country abandoned the war in Afghanistan.

“I honestly have been overwhelmed by the outpouring of compassion for the group of Afghans,” he said. “I think that’s in large part because our Veterans community understands so clearly how many, many of these people fought by our side in Afghanistan and believe that we owe them not only our gratitude but we owe them our hard work to get them appropriately and safely resettled.”

Markell said he had talked to people across the political spectrum and many have questions about the vetting process.

“But when I explain how the vetting process takes place and the public health measures that are taking place in the military bases, people really get it,” Markell said. “We are fortunate to live in a country where immigrants and refugees throughout our history have brought new ideas, new energy, new perspectives and have enriched our lives, and I really think that is at the heart of why there’s been so much goodwill toward these allies from Afghanistan.”

Those who arrive with a Special Immigration Visa will be fast-tracked to become U.S. citizens. Others will be able to work through the regular process, he said.

Markell said he’s also been able to visit places like Fort Dix in New Jersey and Quantico, Virginia, who are processing the refuges before they are released to final destinations.

People who want to help should reach out to their local agencies, such as Jewish Family Services, or to a website called Welcome.US, which he’s impressed with and which will help visitors donate cash, airline miles, Airbnb space or sponsor an arriving family, among other things.

Markell said Delaware has benefitted so much over the years from new people that he thinks the Afghan resettlement is another change for Delaware to show off the spirit of hospitality, inclusion and generosity that he believes is at the heart of the community.

Working in the White House is exciting, Markell said.

“It’s also humbling to be given the magnitude and the importance of the work that takes place here,” he said. He’s been impressed by the quality of people there and those in the agencies he’s dealing with, all of whom have a remarkable combination of competence and compassion.

As governor and a businessman, he’s had to deal with complicated issues, and he likes doing that.

“This one is really complex when you consider the housing, health care, education, employment,” he said. “Adding the international dimension and adding the opportunity to work with people across the country is just very exciting, and I would say one of the best parts is being able to connect the dots.”

About a month ago, he met a college student from Afghanistan who was studying German but now wants to be a computer scientist.

Markell was able to help connect him with a nonprofit group that wants to train people in that field.

“I’m pretty confident that within a short period of time this young man is going to be making a decent living,” he said. “Helping people get on a path to self-sufficiency is such a big part of what we need to focus on, and it’s really an exciting part as well.”