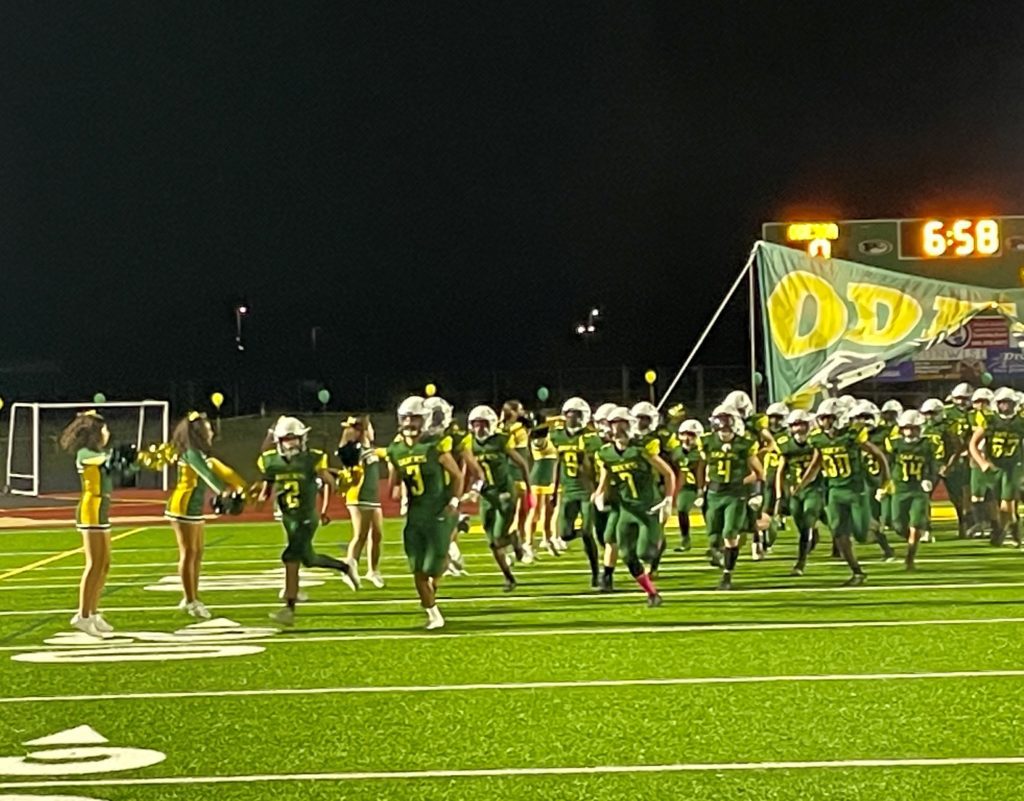 In only their second year as a school the Odessa Ducks are playing their first varsity football schedule. Just as we have seen with other new schools like St George’s Tech they wont have seniors until their fourth year in existence so their team consists of all Sophomores and Freshmans since the school has been only open for two years. They will add a junior class next year and a senior year after that. In their first ever homecoming as a varsity program the Ducks would host Polyetch.

The Ducks struck first. Late in the first quarter Mackenzie Keating took a hand off on an end around that went for 30 yards untouched for a 30 yard touchdown. The Ducks then went for a 2 point conversion that was successfully converted as they faked the field goal with a direct snap to Keating who was behind a line of blockers as he walked in the endzone. Ducks lead 8-0.

Polytech tied things up in the second quarter as freshman quarterback Simon Balcerak busted through a few Odessa defenders for a 1 yard touchdown run. The Panthers then went for a 2 point conversion as well and they too were successful. Balcerak took the snap and rolled to his right hitting Bruno Nyandemo who made a great leaping catch in the endzone. The score was tied 8-8 which would be the halftime score.

The Ducks took the opening kickoff of the second half and marched right down the field. Odessa quarterback Vincenzo Orlando found Keating across the middle as they connected for Keating’s second 30 yard touchdown of the game as he caught then ran into the endzone for the touchdown. Odessa would try for another 2 point conversion but they were unsuccessful this time as Polytech sniffed out the fake kick. The Ducks led 14-8.

On the ensuing kickoff the Panthers found themselves pinned deep in their territory. Panthers made a switch at quarterback as Tariq Bacdi couldn’t handle the snap as he went to grab the ball loose on the turf he was hit by Ahzir Bellamy a Ducks linebacker that knocked the ball into the endzone which was recovered by Roman Carter for a Ducks touchdown. Odessa would lead 20-8 after the fumble recovery in the endzone.

Polytech didn’t go away though. They too would capitalize on a turnover for a score. Ducks quarterback Orlando hit Chase Belin on a toss left, but Belin would fumble the ball. Panthers defense back Jalen Anderson scooped up the fumble and returned it 60 yards for a Panthers touchdown.  Polyech then went for two again having the same outcome as their first try. Balcerak rolled right and threw a pass but this time he hit Amir Jenkins in the back of the endzone, bringing the score to 20-16.

Polyech would find themselves with an opportunity to come back and win. With just under a minute to go the Panthers would start to put together a drive. Balcerak would complete two long passes to Jenkins and Nyandemo down the right side of the field as they entered Ducks territory. Balcerak then dropped back looking over the middle for Jenkins one more time, but the pass was picked off by Noah Norment sealing the victory for the Ducks.

The Ducks improved to 3-4 in their first varsity season. They will host Red Lion next Friday night 10/22 at 7:30pm.

Polytech falls to 2-5 on the season. They will host Early College next Friday night 10/22 at 7pm.