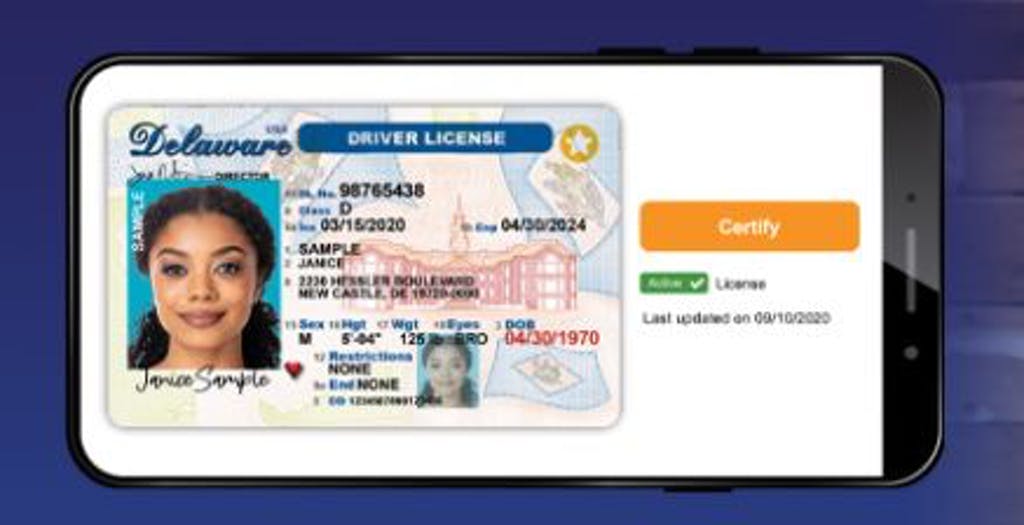 A new DMV program allows people to put driver’s licenses on their telephones.

Delaware took another step into 21st century technology Tuesday by announcing it will begin offering a way for residents to prove their identity by showing their driver’s license on their mobile phones.

The system uses a new app, Delaware Mobile ID, that the Delaware Division of Motor Vehicles says has been tested extensively. The app can be downloaded from the Apple Store or Google Play.

News reports from 2019 say Delaware was one of 10 states to begin testing mobile identification on an app made by Massachusetts company Idemia. It is protected by passwords and can be updated more easily than plastic driver’s license and identification cards.

The mobile ID will offer privacy control options that allow the user to prove they are of legal age while hiding unnecessary information such as the user’s address as they show ID to buy alcohol or tobacco.

There is no charge for the app now. Marinah Carver, spokeswoman for the DMV, said the state plans to institute a fee of less than $5 starting in February 2022 for use of the system.

Even with the app, the DMV said in its press release that it is important to note that residents are required by law to continue to carry their physical driver’s license for age and identity verification.

Delaware law enforcement officers are not required to accept mobile IDs, other states may not accept identification on a smart phone, and the state is just beginning to market the program to Delaware businesses, Carver said.

“Law enforcement agencies have received MiD demos and are aware that we are offering this alternative to the public,” Carver said. “Idemia is working on a solution for the future that would allow law enforcement to utilize MiD for identification purposes, but that technology is not available now.”

It’s one reason anyone with the app should continue to carry their physical IDs, she said.

Only two other states have adopted the program, and those states are not in the MidAtlantic. That’s expected to grow but not quickly.

“Widespread adoption is not coming in the near future,” Carver said. “That’s why it’s important for people to carry their physical IDs if you choose mobile ID. That way you can identify yourself in case that they don’t accept mobile ID.”

She is not sure how Delaware businesses will react now to mobile IDs because it’s so new. The state is reaching out to companies with offers for training and signage to help increase the acceptance of mobile IDs.

She encourages anyone who wants to use mobile IDs to ask their favorite businesses if they accept them.

There may be places or situations in which someone asks for a physical license –boarding a plane would be an example — and the law requires a person to produce it, she said.

The DMV press release said the mobile ID will help fight identity theft in several ways. It will require users to scan and upload their physical ID as well as  a live selfie to compare against the individual’s file with the Delaware DMV.

After approval,  users unlock the app using their face or fingerprints, ensuring only they can access their ID.

“Mobile ID has additional benefits that a physical identification card simply does not have, and  Delaware is proud to be one of the first states to pilot this technology,” said Jana Simpler, director of the Delaware DMV. “We are happy to be able to provide this voluntary option to our  customers.”

The DMV said the platform will allow the Mobile IDs to display the most up-to-date version and status provided by  the DMV.

The app will not track any other information, said Carver.

“All of that information is not stored on a cloud,” Carver said. “It stays on your smartphone device. The only point of contact between your device and the outside world would be when communicating with the DMV system.”

Some 2019 news reports about the programs said the app could be altered digitally with the press of a button by the state and that an officer during a traffic stop could ping the phone to verify the ID without the owner handing the phone to the officer.

DMV officials will be able to completely wipe license information from a phone if the phone is reported stolen, Carver said. She also pointed out that if a phone is stolen, information on the app could not be accessed without a fingerprint or face scan.

News reports in 2019 also raised issues about whether the mobile IDs are fair because not everyone owns or can afford a smartphone.

Carver said that the state has no plans to stop issuing physical licenses and ID cards.

“I’m on the younger side, and I expect to have a physical license for the rest of my lifetime,” she said. “I don’t see that ever being something we stop making. I can’t speak for 100 years in the future, what kind of technology we will have, but I don’t see that happening in my lifetime.”

The mobile ID program has one advantage that a paper one doesn’t, a software executive said in 2019.