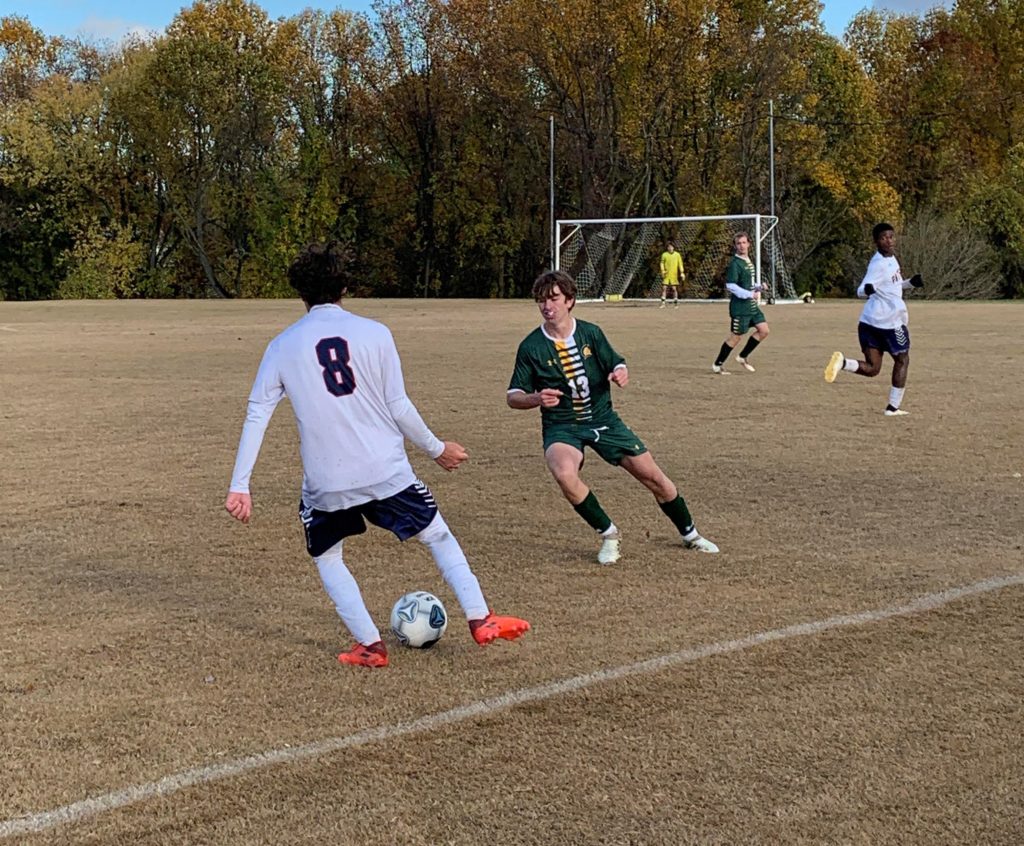 The one seed, St. Mark’s went into Saturday’s matchup with #9 seed Newark Charter hoping the cold and rainy conditions would favor their methodical approach to the game. However, the Spartans fell behind quickly as Newark Charter scored the first goal of the contest early in the first half, not only giving them the lead but forcing the Spartans to play at a faster pace being one goal down. After things settled down and the rain picked up, it became evident both sides had very different approaches to securing a victory and moving on in the tournament. Newark Charter chose to play fast and attempted to take advantage of their speed up top and the wet field conditions as their defenders cleared the ball in the back with booming kicks forward, hoping their offensive players would settle the long passes and attack. Conversely, the Spartans chose to stay with a calculated and patient approach moving the ball up the field with shorter passes and were content to control the middle third of the field. Neither team were able to come up with any legitimate scoring chances in the first half other than the one goal early in the contest. The rain, cold and wind all played a major role, making it difficult for both teams’ skill players to control the ball.

Miraculously, the rain stopped about seven minutes into the second half and the sun started to shine through the clouds. Both teams were well aware they needed to change things up going into the second half but the sunshine seemed to add a little intensity to both sides despite the lingering cold air. St. Mark’s continued with their approach to the game as their technical skill in the midfield now started to pay dividends. The Spartans moved the ball though the Patriot midfielders and defense, securing a number of corner kicks and finally broke through with 13 minutes to go in the contest. Jeremy Shannon for the Spartans would come flying in from the far side of the 18 yard box to send a header off another corner past a diving Newark Charter keeper into the side netting to tie the game 1-1. Regulation time ended with the Spartans maintaining the momentum and carried it into the first half of two 10 minute overtimes.

Newark Charter spent most of the overtime periods back on their heels as the Spartans created multiple scoring chances, with a few ricocheting off the crossbar and goal posts. However, Newark Charter’s bend but don’t break approach held strong as the two 10 minute periods resulted in the same 1-1 score they ended regulation with. The Spartans would take the first penalty shot, emphatically placing it cleanly in the back of the net. After this the momentum changed. The next three Patriot players scored on beautifully taken shots leaving no chance for the St. Mark’s keeper. The Spartans would go on to have one shot blocked and send another over the crossbar resulting in a 4-3 Newark Charter advantage, never even having to take their fifth shot. The Patriots won 1-1 (4-3 penalties) and will face Caravel Academy, Wednesday evening, 8pm at St. Andrews.