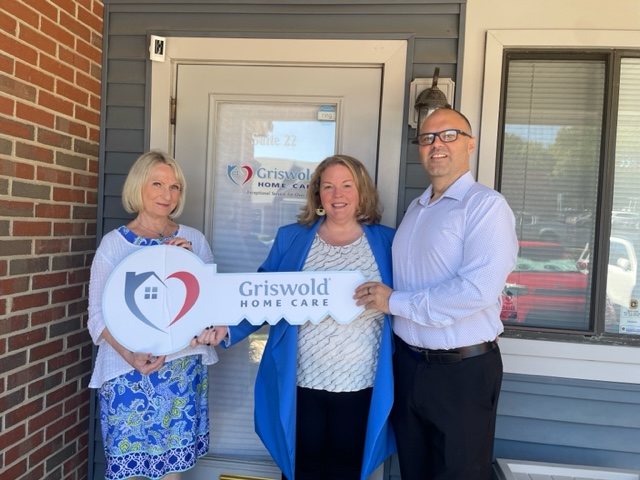 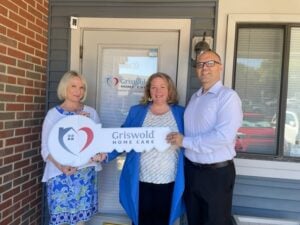 A year ago, Carrie and Patrick Gray received a text out of the blue asking if they were interested in buying a home care business.

“Say yes and let’s see what this is all about,” Patrick told Carrie.

That set off a year-long process that ended Friday, when their deal to buy Griswold Home Care of New Castle County closed, a few days shy of that Oct. 3, 2021 email. They declined to reveal the price.

Now the couple will frequently be going to work together for the first time in their marriage, with Carrie as CEO handling the back office and Patrick as chief operations officer handling the day-to-day work.

It will mean a few changes for the couple that’s been married for 16 years.

One evening recently after working together at Griswold’s Kirkwood Highway Office, Carrie turned to Patrick to ask, as she usually did, “How was your day?” and then quickly added, “Oh, wait. I know how your day was.”

The couple had known for a while that they wanted to buy a business. When the call came, Patrick immediately speculated that it was Griswold, because they had known owner Anne Eidschun for years through the Rotary Club and other civic groups.

Eidschun had retired from one job a decade ago when she decided she wasn’t ready to quit working and became interested in home health care. She was chosen by its retiring owner to take over.

“I think if you don’t have a passion for serving others, you’re not going to get into this business,” Patrick said. “And if you truly feel that, it doesn’t necessarily feel like a business or a chore when you have the ability to help the people what we serve on a daily basis.”

“I know that Carrie and Patrick Gray will continue to provide our clients and their families with the excellent care and customer service that they have come to expect.” Eidschun said in a press release. “They are the perfect couple to serve as the stewards of the outstanding Griswold name and reputation.”

The company provides non-skilled medical services, mostly to seniors but also to others who may have need of help, such as the disabled or people recovering from surgery or illness. Most of their customers are private pay.

The 35-year-old business, a franchise with its national office is in Philadelphia,  is focused on an area that health experts expect to grow.

As the population ages and people are living longer with chronic conditions, health officials hope to keep people in their own homes as long as it’s safely possible.

A large part of Griswold’s care will be helping people deal with dementia and Alzheimer’s Disease, Patrick said.

“We see a lot of need for folks with dementia to have the ability to stay at home,” Carrie said. “Transitioning somebody with dementia into a facility can be really valuable for a lot of reasons, but it can also be really difficult because now their entire surroundings have changed.

“So we see an opportunity to really train our caregivers to be dementia specialists and to really make that a specialization of this office.”

Families can sign up for as little as four hours a week to hiring live-in companions.

Carrie and Patrick met each other in a French class as juniors when he sat in front of her at Woodstown High School in New Jersey.

They casually stayed in touch after heading off to college, she to Elon University in North Carolina and he to Davis & Elkins College in Elkins, West Virginia.

Carrie then headed to Syracuse University, where she got a master’s in public relations and interned at First Night Wilmington.

That lead to two job offers, one at Downtown Visions and one at Wilmington 2000, the forerunner to the Wilmington Renaissance Corp. She picked the WRC, where she would stay for 20 years, many as executive director.

Carrie went on to get her master’s in business administration from Wilmington University , where she worked as the head of the business PHD program before founding her own consulting and coaching company.

Patrick became a recruiter for Goldey Beacom College. From there, he worked for a Baltimore home builder in sales before moving into management.

“So this was a natural transition for me,” Patrick said of buying Griswold.

He likes homebuilding and caregiving for the same reason: You can see the results of what you’re doing.

With homes, it’s watching a couple go through the process of building their own. With caregiving, it’s seeing people thrive, whether staying in their own home or moving into assisted living.

The Grays ended up a couple after Patrick returned to Wilmington. He called Carrie to ask her advice about where to buy a house. They began dating in January 2005 and were talking about getting married by July. They were wed in 2006 and have one son.

Before jumping on to the married-couples-working-together bandwagon, they talked to about eight couples who work together about how to handle it.

They were told as to recognize each other’s strengths, trust their partner to handle his or her part of the business and mostly stay in their own lane.

One couple who is in the industry said they only allow business conversions in one room of the house. If they are not in that room, they do not talk business.

“Patrick’s my best friend,” Carrie said, “so I like spending time with him. It’s not odd, but it was a little funny the first morning.”

She plans to continue her consulting company and essentially work part-time at Griswold.

Their first job will be to recruit additional caregivers. During COVID, the number dropped, partly because the company would only employee people who were vaccinated.

It’s already started growing since Patrick went to work at the company in May as chief operating officer.

Both of the Grays have experience being a caregiver for a family member and needing to identify a caregiver to help.

Now, Patrick said, “We feel incredibly fortunate to have this opportunity to ensure that our clients and their families receive the best care possible.”