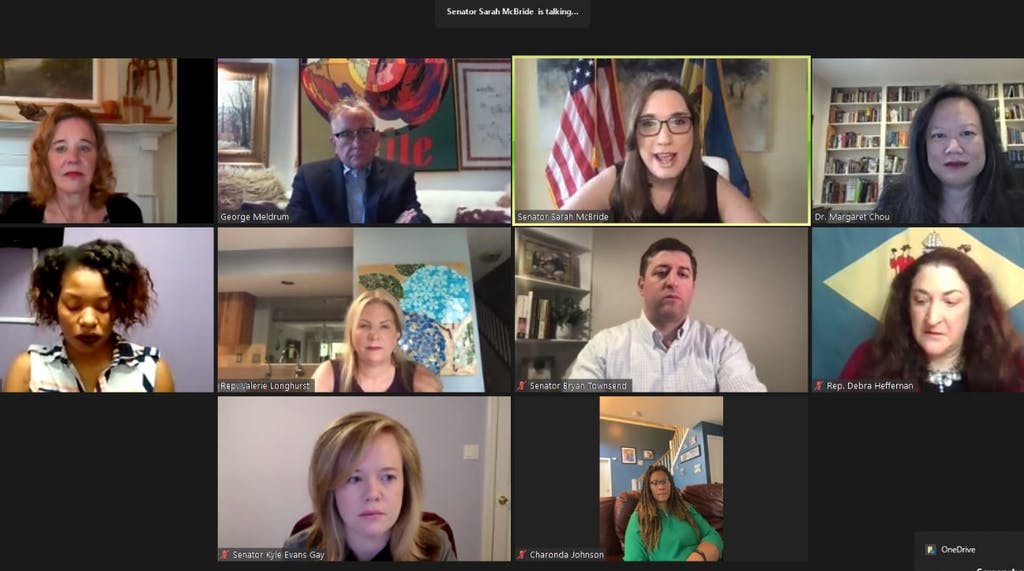 Sent. Sarah McBride, third from left, top, talks about her bill to create a family and medical leave plan for all state workers.

A new bill filled in the Delaware General Assembly Wednesday would tax employers and workers to create a $100 million new program that could give paid family and medical leave to all qualified Delaware workers starting in 2023.

Senate Bill 1, filed by Sen. Sarah McBride, D-North Wilmington, would create the Family and Medical Leave Insurance Account Fund, by taxing both workers and employees each .4 percent of every dollar paid.

That comes out to $4 per $1,000 paid for both employer and worker. Businesses with 20 employees or less would not be required to pay the employer share.

The bill would require employees to have worked in Delaware at least 120 days and earned at least $3,000 to be eligible to apply for payment through the new state office. Workers must document a valid reason such as the birth of a child, a serious illness or a military deployment, McBride said. The worker will be paid up to 80% of his or her salary, up to a maximum of $900 a week.

The program does not allow for a worker to simply walk off a job and expect to be paid, McBride said.

Employees would not be allowed to take the leave at the same time they are on workman’s comp, but they may be able to take the leave a few days at a time over months to cover something like cancer treatments, McBride said. Employers would be required to keep their jobs open for them, under the same rules as the federal Family and Medical Leave Act.

Workers may be allowed to take a maximum of 16 weeks in one rolling year that begins with the first day covered by paid leave for the first event. McBride said that will be allowed to cover a situation such as the birth of a child and then a worker being diagnosed with cancer, she said.

The program would be administered in a new office in the state Department of Labor,

McBride and others who spoke during a 9 a.m. press conference hailed the bill as good for employees, especially new parents and those dealing with critical illnesses, and good for Delaware’s economy because it would encourage workers to come to Delaware and stay in Delaware.

Employers who already offer some kind of family and medical leave would be able to drop what they have in favor of the state system, McBride said.

“More than anything else, this pandemic has shown us just how desperately Delaware’s working families need common sense policies that work for them, whether a person is facing COVID or cancer, a global health crisis or an individual health crisis,” McBride said. “No one should be forced to choose between their paycheck and their health.”

While Alisa Morkides, owner of Brew HaHa! coffee shops said during the press conference that she would be happy to have the program for her 75 employees, other businesses are not so thrilled.

Michael J. Quaranta, president of the Delaware State Chamber of Commerce, said Wednesday that the chamber appreciated the deliberative approach McBride had taken with the bill and had met with her several times. Last week, it send her a letter that outlined their reactions.

That letter said that there are 57,000 businesses in Delaware, and slightly more than 56,000 had fewer than 50 employees. It suggested starting the new program with companies that had 35 employees or more, with at least three consecutive years of positive growth and steady finances.

“If the most ‘financially fit’ businesses can adapt to these changes after a few years, you could considering lowering the headcount threshold after more is learned,” the letter said.

Last week’s letter also suggested implementing the new law gradually has it has been in New Jersey, where the weeks of leave rise from 6 in the first year to 8 the second, 10 the third and 12 in the fourth year; exempting startup or new businesses for three to five years; creating a less broad definition of what constitutes a reason to take the leave; only allowing employees who had worked for 12 months with at least 1,250 hours of service to be eligible for paid leave; lowering the pay to the 66.67% as President Joe Biden’s proposed Family Act would do.

“The realities of life and work are ever present, and employers are always trying to balance their workforce and competitive needs against the backdrop of economic factors and life events,” Quaranta said in Wednesday’s statement. “The subject Sen. Sarah McBride has taken on is very complicated and gets exponentially more challenging as smaller businesses are brought into the discussion. Many of these businesses do not have full time, dedicated human resource managers, or benefits policy experts.”

One of the complaints of smaller businesses is that they may have to hire someone to fill the roles of the person on leave. When the employee returns, the business would have to fire that substitute, who then would be eligible for unemployment. That would raise the cost of unemployment for the business.

Quaranta also said in his emailed statement that the chamber’s position “may further evolve as our members offer additional insights and analysis into how this proposal would impact their employees and businesses.”

More about the bill

SB1, which is dubbed the Healthy Delaware Families Act, was based on the best practices of the nine states and the District of Columbia who already have passed the bill, McBride said.

Among the reasons it would offer leave are adoption of a child under the age of 6 and also in some cases of domestic abuse.

The $100 million it will raise would pay for both the money going to workers who use the system and for the administration of the system, she said. She said the Department of Labor had not yet estimated how many people that office would need to handle the program.

Because of the way the program is modelled after other state programs and their usage, data, McBride said she does not expect a rush on the system.

The model used other state data to predict usage rates, she said.

The bill will allow self-employed to opt into the system. and it will allow businesses that have leave programs that are equal to or better than the state program to opt out.

The bill says that beginning in 2025, the Department of Labor will be required to report to the General Assembly by April 1 of each year on projected and actual program participation and include purpose, gender of beneficiary, premium rates, fund balances, outreach efforts, and family members for whom leave was taken to provide care.

In the press conference before the bill was filed, McBride talked about how her husband, Andrew, had to quit his job in order to deal with the appointments and treatments related to his cancer. When it became apparent that his case was terminal and he needed caregiving, paid leave allowed her to stay with him and care for him.

“So many Delawareans aren’t as lucky,” she said.

Ernesta Coursey of Wilmington described how, when she discovered she was pregnant the first two times, she asked her salon employer to save her tips for the lengths of those pregnancies. That money allowed her to cover her rent for two months, because she didn’t have paid leave. She had paid leave, which she called a godsend, and was able to spend more time with her third child after the baby was born.

“I know paid medical leave will lift up our families so we can thrive,” she said.

George Meldrum, president of Delaware’s AARP, pointed out that the state has 128,000 unpaid family caregivers.

Charonda Johnson of Townsend, a disabled veteran, described how her military father’s diagnosis of COVID during the summer threw the family into turmoil, then her mom got sick with something else, a sister was hospitalized for another illness, and, finally, her grandparents’ caregiver also was diagnosed with it. Her father died from COVID.

“My family members had to endure and juggle,” she said.

Johnson said her husband offered to help, but he would have had to take the leave unpaid, and they needed the money.

“I want to tell you many other families across our nation and across our state just like us battled COVID in an ugly way,” Johnson said. “I’m here today because there are thousands of Delawareans who have had to make the same difficult, impossible choices that my family did. And no family should ever have to make such a decision.”