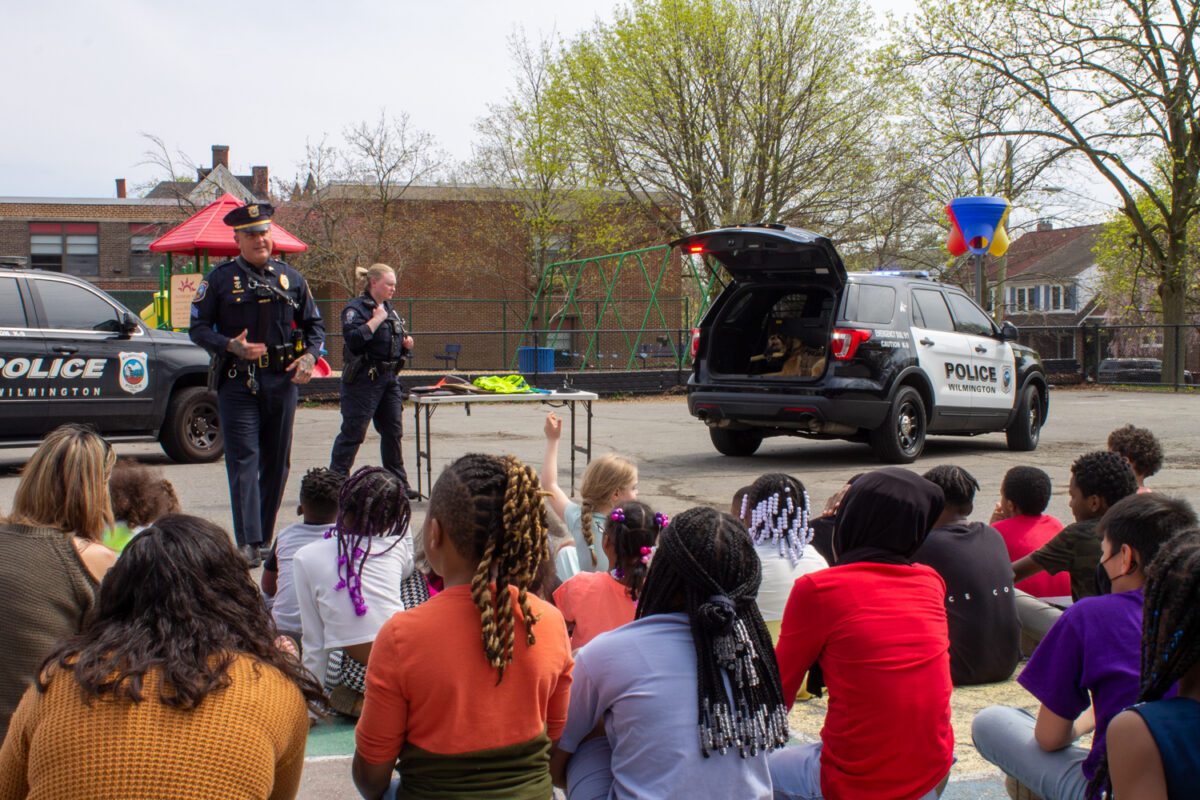 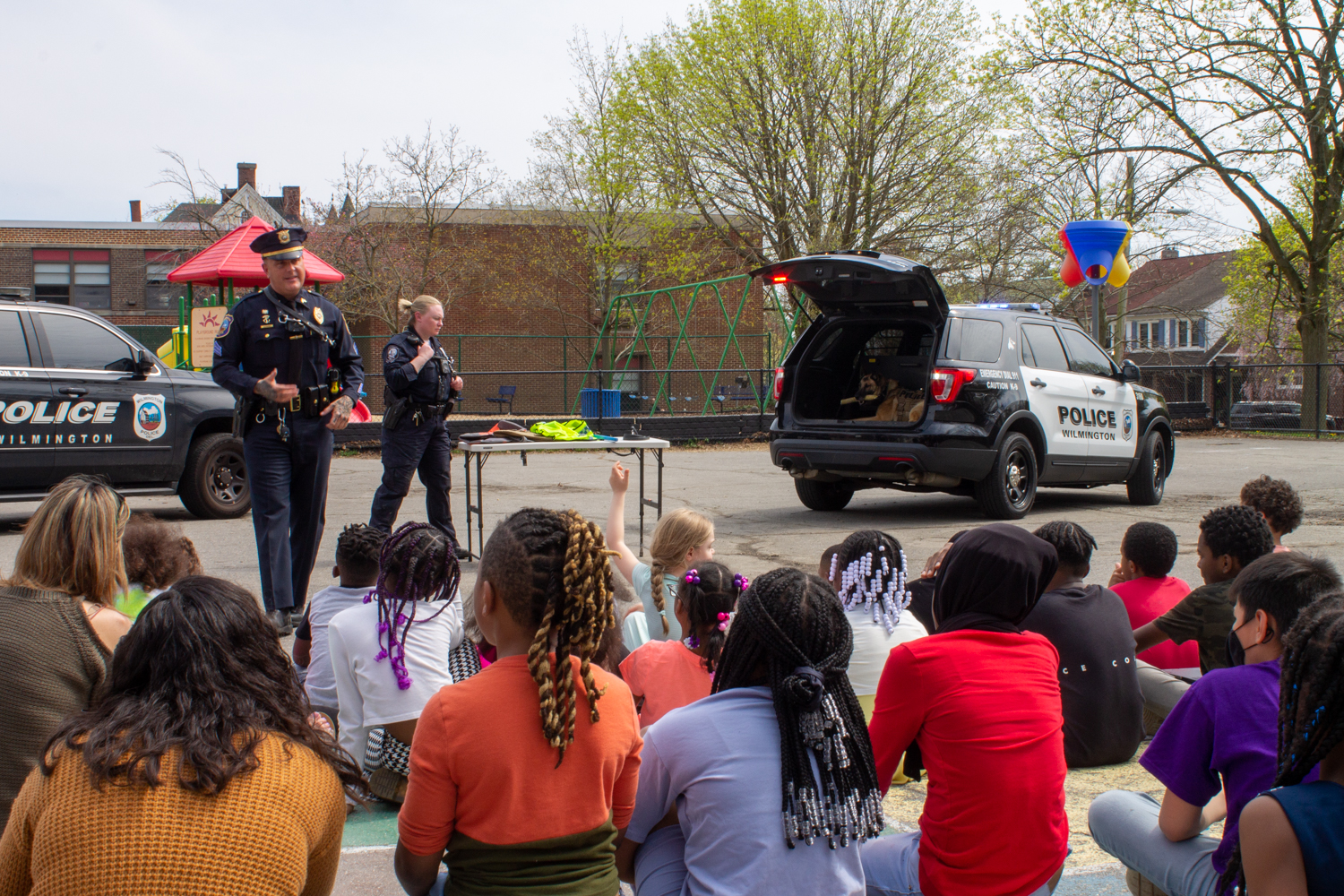 A new initiative at Warner Elementary School in Wilmington is bringing law enforcement into schools to teach fifth-graders about how officers investigate crimes, conflict resolution and more.

For 10 weeks, students at Warner have an opportunity to enroll in the “Cops and Kids After School” after-school program, which started last week.

So far, 30 fifth-graders have signed up. The meetings are once a week for an hour-and-a-half. Each session will focus on a different topic that relates to the daily work of cops.

“We’re able to get into these schools and humanize our job, explain how we do things and why we do things,” said Andrew Conine, a police sergeant in the city. “And then at the end, we remind them that we are there for them and will do anything possible to help them if they ever need us.”

These are the 10 subjects set to be discussed:

“I cannot think of a better way to build positive relationships and reiterate to students that law enforcement officers are here for our protection,” said Warner Elementary Principal Kimberly G. Bruinton in a press release.

“By exposing them to various departments and opportunities, the hope is that our students will learn to respect the community workers in the police department, as well as the services offered, and even one day serve within their own community.”

Conine said building a community bond between officers and the youth is equally as important than the content lessons themselves.

“We come in, they see the uniform, and some kids are intimidated because of what they read in the news or see in Hollywood,” he said. “And then we start to talk and break the ice and let them get to know us. We have kids ourselves, we’ll bring in a K-9, and it all just allows them to see we are everyday human beings who want to protect them.”

Once that happens, Conine said, a fantastic dialogue is created and the children ask amazing questions.

He said the lessons explore what police officers do everyday.

The students will learn how to take fingerprints and the role that plays in investigating a suspect, how to collect evidence and take photographs in a crime scene, the importance of K-9 dogs when detecting bombs and other explosives, and more.

Many of the skills, like resolving conflict, will help a child navigate through everyday life, Conine said.

Sprinkled in with the instruction are workouts for the fifth-graders, like push-ups, sit-ups and light calisthenics.

The initiative is based on the work of Cpl. Semaja Banks, who is assigned to the patrol district that includes Warner.

She was heavily involved in community outreach, according to Conine, and wanted to build the camaraderie between Warner students and the police department to honor the late Terrance Newton’s efforts in police engagement with children.

Newton, affectionately known as “Newt,” was the principal of Warner for three years before dying in a vehicle accident in March. He was known for enthusiastically meeting the kids at the front door every morning to set their day off with encouragement.

“I cannot think of a more fitting tribute to Dr. Newton’s legacy than following through on a police-community initiative that he was passionate about launching,” said Chief Robert J. Tracy in a press release.. “Our officers continue to build strong relationships with Wilmingtonians of all ages, and we look forward to seeing this program grow.”

A lot of planning, effort, and time goes into making community outreach initiative work, Conine said, but the Wilmington Police Department hopes to add initiatives like this in more schools.

He said programs like these are a win-win because it’s great for community members but also is really great for the mental health of police officers.

“Almost all the time, people are calling 911 when they’re having the worst day of their life, so the calls that we go to a lot of the time are chaotic and stressful,” Conine said. “If officers aren’t working on their own mental fitness, it could definitely weigh on them.”

Going into schools helps remind the officers that the overwhelming majority of community members are beautiful people and amazing citizens, he said.

More fifth-graders are expected to sign up as the weeks roll on, and the initiative is expected to last until mid-January.