What visitors see and, more importantly, do will change as well.

“We’re joining the 21st century,” said Halsey Spruance, the executive director of the private, nonprofit Greenville museum. “We’re moving from the techniques of the past and are embracing the future. We have to change the platform, the foundation.”

Out are static exhibits and the “learn and be enlightened” era of educators lecturing.

In are more open-ended questions and hypotheses that send students and other museum-goers on journeys. In fact, two new galleries are called journeys.

The museum just closed for the necessary renovations and will be closed to the public until early 2022. During renovations, some events will be held across Kennett Pike at Winterthur.

“Our goal is a complete reinvention – a metamorphosis – to meet the community need for a regional leader in formal and informal science education,” it says on its website. 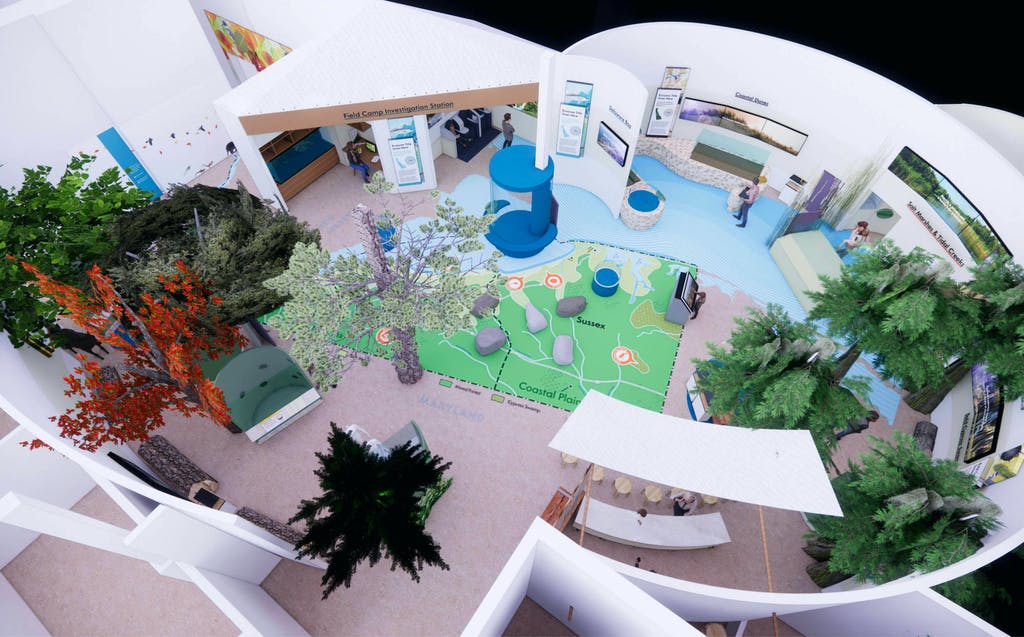 Artist’s rendering from the museum of the new Delaware Museum of Nature and Science Delaware gallery.

The new museum will emphasize three galleries (Delaware Regional Journey, Global Ecosystems Journey and Discovery) and two other areas (the PaleoZone and the Evolution Trail outdoors).

The Delaware Regional Journey will use a giant floor map and activities at designated stations to explore local biodiversity. Featured environments include the northern piedmont and coastal plain forests, salt marshes, the bald cypress swamp and the Delaware Bay. Research by Delaware’s colleges and nonprofits will also be included, Spruance said.

The Global Ecosystems Journey focuses on “the diversity of nature in the world, the interdependency of life and how humans play the biggest role in change.” Its featured environments include the African savannah, the Arctic tundra, oceans and the South American rainforest. And there’s another floor map.

The Discovery Gallery is a flexible space for exhibits and events.

The PaleoZone will focus on species that lived in the mid-Atlantic in the Cretaceous period, the last part of the age of dinosaurs, roughly 45 million to 66 million years ago.

Features will include dryptosaurus, nyctosaurus and mosasaur skeleton casts; models to touch; a tunnel to crawl under the skeletons; and an interactive dig site to work like a paleontologist. These new skeleton casts will replace casts of dinosaurs that used to live in China.

The Evolution Trail is a 1,500-foot outdoor loop that symbolically covers 4.6 billion years, from the formation of Earth to the present day (humans are around only the last three feet). The trail, on the south side of the museum building, is already open.

And there’s more: The Skylight Atrium will feature a Tree of Life, showing “the evolution of organisms over billions of years and the relationship between them in increasingly diverse branches.”

The Rest, Relax and Recharge Hub is another flexible space, and the place for refreshments.

The special exhibit hall and the Nature Nook are staying the same.

Artist’s rendering from the museum of the new Delaware Museum of Nature and Science. The squid will still prominently welcome visitors.

Helping out with that reconnaissance were board advisors Catharine Hawks and Michael Vecchione, who work for the Smithsonian, Spruance said.

Helping out to connect to research in the state was new board member Estella Atekwana, dean of the University of Delaware’s College of Earth, Ocean and Environment.

“By switching from static, taxonomy-based dioramas to interactive, ecosystem-based engagements, the new Delaware Museum of Nature and Science will inspire people to discover, examine, and uncover the wonders of science in the natural world,” the site promises. “The new museum will be the go-to place to learn about our world, how we are connected, and how we can make a difference.”

The museum is five years into a $9.8 million capital campaign to design and construct exhibits and outdoor components, update the sprinkler system and develop the new brand.

Some details are still being developed, including the future admission.

The museum was founded in 1957 and opened in 1972. Its 72,000-square-foot building includes 27,000 square feet of exhibition space and the same amount for research, with the rest allocated to administration and operations.

Its most famous collection covers birds, including more than 113,000 specimens representing 4,000 species, with study skins, skeletons, spread wings and eggs.

“It’s bittersweet,” Spruance said. “We’re saying goodbye to so much that we loved for so long, and that’s bitter. And it’s sweet that we’re entering the 21st century.”