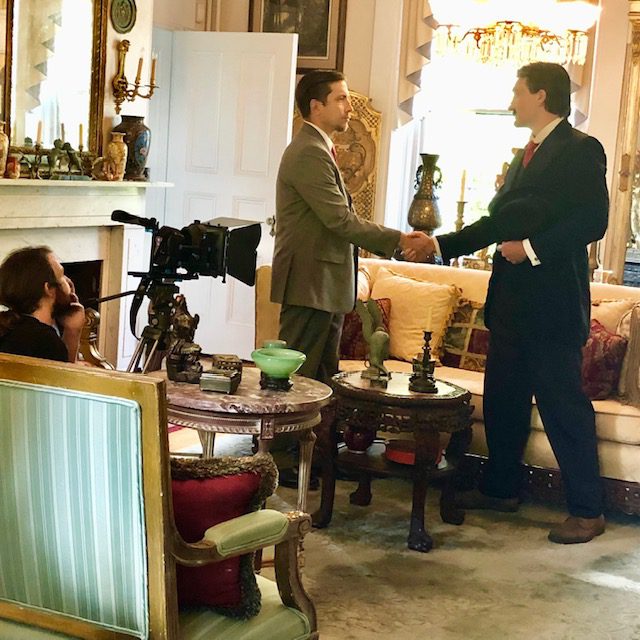 Parts of the documentary “My Dear Douglass” were filmed at Causey Mansion.

The Johnson Victrola Museum, located at 375 South New Street in Dover, recently filmed a documentary entitled “My Dear Douglass,” the story of one of the little known founders of the Victor Talking Machine Company, Leon Forrest Douglass. The documentary will air virtually through Zoom and on Facebook Live on November 12 at 6 PM.

“This documentary came about when, during COVID, we conducted a significant amount of research,” Chris Hall, Site Supervisor at the Johnson Victrola Museum, said. “One of our interpreters, Nicole Rogers, began looking into the history of the company and discovered correspondence to and from Douglass as well as his memoirs. Upon further research, we learned that Douglass was the second most important person in this company and we wanted to provide more information to the public about him.”

“Douglass was one of the earliest people in the phonograph industry,” Hall said. “He jumped around to different companies, working with Edison, Gramophone and Columbia. Gramophone was falling apart when he worked there because of some legal troubles they were dealing with. One of the mechanics working at Gramophone was Eldridge Johnson. Before Gramophone went out of business, Johnson and Douglass jumped ship and started their own company, initially using the name Gramophone with a different spelling. When they were threatened with a lawsuit, they renamed the company the Victor Talking Machine Company.”

Hall was not sure exactly how Douglass’ legacy with the Victor company was lost. One belief is that some wanted to downplay his contributions and promote Johnson’s legacy. However, in correspondence, Hall and his staff discovered that Douglass often gave credit to Johnson in his correspondence and Johnson did the same for his friend.

“The documentary covers Douglass from the time he was born with a large part dedicated to his time at Victor since that is the focus of our museum,” Hall said. “Even after he left Victor, he continued to invent new things. In fact, he invented color film and was very important in the development of motion pictures. He successfully sued Disney, Fox and Technicolor for using his invention without permission.”

Based on correspondence the museum staff found, Douglass was responsible for the concept of the Victrola company. He also invented the flip lighter, underwater photography and the magnetic torpedo.

The Johnson Victrola Museum is open Wednesday through Saturday from 9:30 AM until 4 PM. Anyone interested in registering for the Zoom presentation of My Dear Douglass can do so by calling 302-739-3262 or emailing jvmuseum@Delaware.gov for access to the following Zoom link:  https://us02web.zoom.us/…/reg…/WN_MRZ6HzePSzO3KEbDvlb3vA. The presentation is free.

Sledding on the dunes is against the rules
Carry the Load, remembering fallen military members, stops in Delaware
YMCAs to offer free summer memberships for teens
State urges residents to prepare for Tropical Storm Elsa