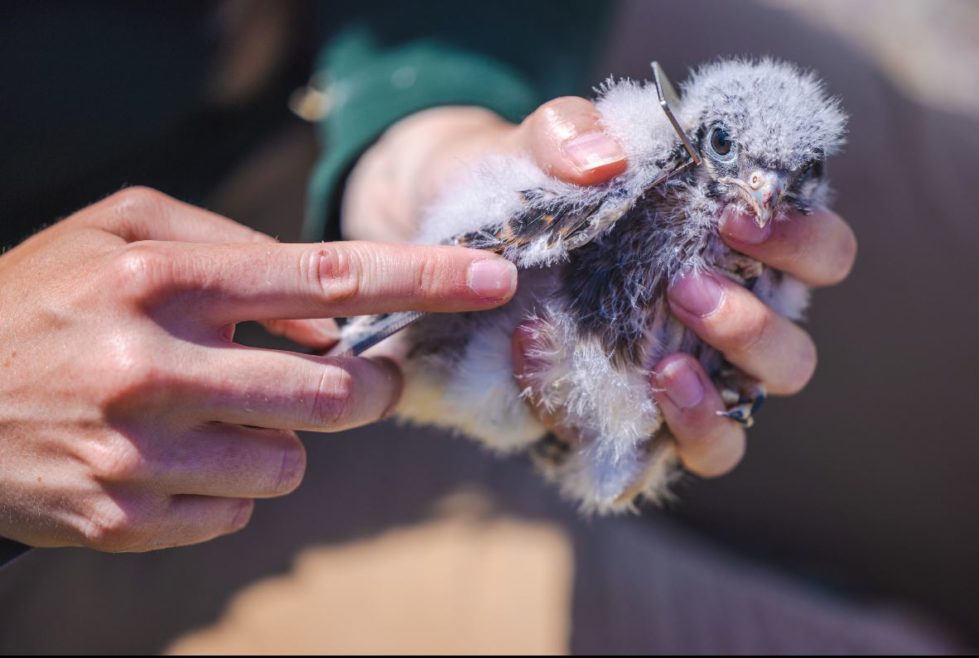 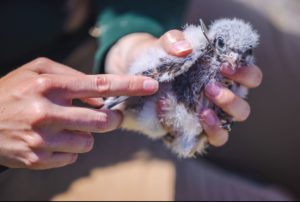 One of Mt.Cuba’s kestrel chicks has a band placed around its leg so researchers can follow the threatened species. Photo by Errol Ebanks/DNREC

Mt. Cuba Center is generally known for its horticulture, but now it has good news for the avian world: A pair of its kestrels has sired five chicks.

Kestrels, the smallest falcons in the U.S., have experienced as much as a 93% population decline since the 1960s, especially in the Mid-Atlantic and New England regions, according to a press release from the Delaware Department of Natural Resources and Environmental Control.

The chicks were discovered two weeks ago during an annual check of the kestrels’ nest box in Mt. Cuba’s meadows. As part of tracking the endangered species, tiny samples of the chicks’ blood were taken and the babies all had leg bands put on so they can be identified.

Mt. Cuba’s kestrel box is one of seven on its site and one of 71 kestrel nest boxes from all three counties that have been monitored during the 2022 nesting season.

The state agency leads the Delaware Kestrel Partnership, a group of conservation agencies and organizations, which is working to save the American kestrels in North America. The state declared them an endangered species in 2014. 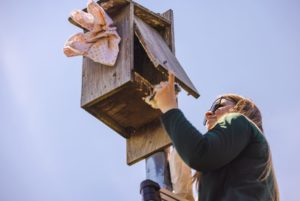 As part of the state response, DNREC and the zoo began installing nest boxes on both private and public lands across the state.

During a nest box visit, kestrel adults and chicks are weighed, measured and banded with unique numbered leg bands that include field-readable colors to identify individual birds.

Blood samples from kestrels are collected by trained staff with veterinarian oversight and sent to collaborators with Hawk Mountain Sanctuary in Kempton, Pennsylvania, to be tested for contaminants and other possible contributors to the kestrel’s decline.

Researchers hope to understand more about how kestrels nest, how far they disperse or migrate, how successful they are at reproducing in Delaware, and how their habitat may be impacting their population levels.

What they learn will help guide future habitat management for this strikingly beautiful falcon.

The next day Brown seized upon another kestrel conservation outreach opportunity at Winterthur Museums and Gardens, which along with Mt. Cuba, is one of the Delaware partnership’s largest landowners.

The kestrel can never have too much habitat in Delaware, Brown said, and while the larger landowners are prominent in providing that habitat, many nest boxes are located on smaller, private lands that can be equally important to the success of the nesting program.

The partnership hopes to add to existing nest box locations in Kent and Sussex counties.

Landowners with open spaces such as meadows, grasslands, livestock paddocks or agricultural fields are encouraged to contact the DNREC’s Wildlife Section at 302-739-9912 if interested in hosting a nest box on their property.