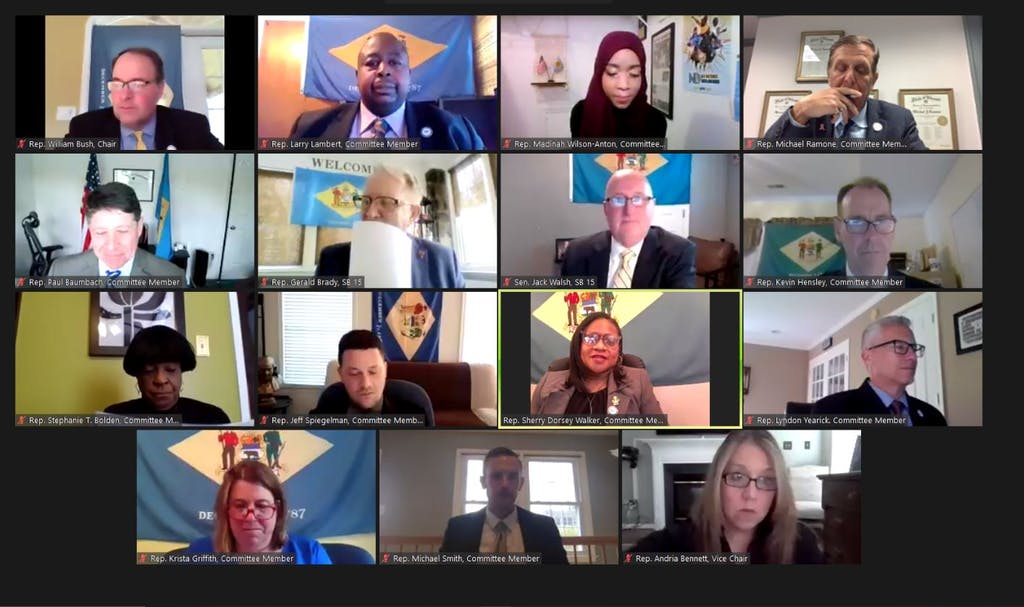 After a three-hour meeting Wednesday afternoon,  a bill to raise Delaware’s minimum wage to $15 passed its first House committee hearing.

Supporters sharpened, but repeated, their arguments: The bill will recognize the dignity of the essential workers who served Delaware during the COVID-19 pandemic; aid racial and gender justice because the majority of minimum wage earners are women and minorities; protect Delaware’s workforce by keeping employees in Delaware instead of seeing them flee to surrounding states that pay more; and will trigger more spending that helps the economy rather than cause job loss and inflation.

“It would be economically immoral not to pass this legislation to help lift all of our hard-working families out of poverty and let them know that there was a chance for everyone to choose the American dream,” said Sen. Jack Walsh, D-Stanton, who sponsored the original Senate bill. “But we all know … that we came here today knowing how we will vote. So you either believe in the minimum wage or you don’t.”

Opponents repeated their arguments and added a few new ones: A pandemic is a terrible time to raise minimum wage and will cause job loss and automation; $15 an hour is not a livable wage and any hikes should be tied to the consumer price index; the situation needs more study and specifically needs more information about how raising wages will affect state spending on social services contracts; keeping minimum wage low will help Delaware capitalize on the attention it’s getting in national press; the bill is likely to hurt many of the people that Democrats think it will help.

The bill passed 8 to 5 along party lines, but the online bill note later said it passed with six yes votes and one “on its merits” meaning the voter may not agree with it, but believes it needs to be heard on the session floor. Thursday morning, the bill note said two had voted for “on its merits.”

Senate Bill 15 still must pass the House Appropriations Committee before going to the floor of the Delaware House of Representatives. Once it does, it’s expected to pass along party lines and go to Gov. John Carney for his signature.

Raising minimum wage long has been a Democratic Party campaign platform and Democrats won enough seats in the last election to essentially move any legislation they want. Republicans oppose it, saying it will hurt business and ultimately the state’s economy.

The arguments for and against broke down into familiar patterns.

Rep. Jeff Spiegelman, R-Clayton, read to the committee the website of Flippy, a robot fry cook designed by Miso Robotics. He called it Mr. Flippy. White Castle restaurants are installing the robots for $20,000 each, Spiegelman. That’s roughly equivalent to the annual pay of one person who receives $15 for 25 hours a week, Spiegelman said.

If the state raises minimum wage to $15, he said, it will “exponentially increase the incentive” for businesses to turn to automation, which will cost jobs, Spiegelman said. An employer only has to pay for the machine once, he said.

Rep. Gerald Brady, D-Wilmington, the House sponsor of the bill, challenged Spiegelman: “Jeff, are you then suggesting that it not be increased so that it’s competitive with Mr. Whoopie or Whippee? So we leave the worker at a lower wage and that will be the incentive for the employer to retain them?”

Spiegelman retorted, “I’m suggesting, Rep. Brady, that the more we incentivize Mr. Flippy, the more you’re going to see Mr. Flippy, and every day we can hold off Mr. Flippy is another three people who have a job, instead of Mr. Flippy.”

“We have automation now,” Walsh said. “If you go to Home Depot, if you go to any of your Royal Farms, it’s automated now. So automation is here and, yes, businesses like them because they cost less than employees … Are you suggesting we cut the minimum wage to $1, so maybe the stores will bring back checkout lines? I don’t think so.”

Mr. Flippy drew the ire of Andrea Brown Clark of the Metropolitan Wilmington Urban League and Network Delaware. She found the comments flippant and entitled. She said Spiegelman was insulting the people who have worked minimum wage jobs and who elected him to fight for their rights.

Tie it to the CPI

State Rep. Mike Smith, R-Pike Creek Valley, said he had grown up in a trailer park with a single mom who worked three jobs to make ends meet. He asked why the proposal wasn’t tied to the consumer price index, as minimum wage is in some states. That way, he said, it would automatically rise to help the lowest paid.

Smith said he was stunned to see that Amazon ran an ad supporting a $15 minimum wage, and he worries about Delaware’s small businesses, who don’t have to economic power that Amazon does. He told Walsh he wanted to offer an amendment to tie any raises to the consumer price index.

Mike Ramone, R-Pike Creek, pointed out that raising the minimum wage to $15 was not creating a livable wage for the 32,000 Delawareans who are now being paid it.  He, too, pressed for the bill to be scrapped and work to be done on a new minimum living wage law.

Smith said he wanted to understand the true cost of raising minimum wage by asking how much money the state needed to add to its contracts with agencies who provide social services. He noted that those groups are locked into state contracts.

Carolyn Fredericks of the Modern Maturity Center, one of many social services agency execs to speak during public comment, said going to $10.50 on Jan. 1 will cost her $118,000. If state contracts aren’t raised, she will have to cut services, she said.

Walsh said he didn’t have those numbers but he has been advocating for better pay for many of the people who work in those programs.

Ruth Ann Jones, controller general for the state, said the state had no projections for that. State contracts for social services do not include salaries, she said, because the state pays for services.

Melissa Hopkins of the Delaware Alliance for Nonprofit Alliance later said all social service agencies are required to submit a detailed budget that includes employee costs.

“So it’s not hard to go back and determine what those increased costs would be for the state,” she said.

Even then, said Verna Hensley of Easter Seals, “The state sets our reimbursement rates for the services, and if the state’s minimum wages increase without a significant increase in these reimbursement rates, it will result in a loss of services to people with disabilities in the state.”

The state has not yet passed the 2022 Grant-in-Aid budget that control social service budgets. That budget will begin July 1 and be in effect on Jan. 1, which the minimum wage will rise if the bill passes the House.

Rep. Bryan Shupe, R-Milford (and the CEO of Delaware Live), said that he felt like a lot of the pleas for a higher minimum wage relied on personal stories. What the state really needed is more empirical data, he said.

He pointed out that the Congressional Budget Office has said a $15 minimum wage hike would help about a million people get a raise, but 1.4 million people will lose their jobs.

Shupe said that no one tracked how the last minimum wage affected state finances.

“So what is the real cost going to be,” he asked. He pointed out that he’s introduced House Bill to create an economic impact analysis of the minimum wage.

“We’re truly in favor of raising the standard of living of for our working families,” he said, “but we need to take a step back. We need to conduct an economic analysis.”

“Every time we debate minimum wage we hear, you know, the same argument about how lifting people out of poverty is somehow bad for the economy and causes mass layoffs and business closures, and it’s just not true,” Walsh said while responding to Spiegelman.

David Cooper, a senior analyst at the Economic Policy Institute in Washington, D.C., said a review of empirical research about wage hikes showed that higher minimum wages have little impact on jobs and actually increased spending on things like dining out.

But Joseph Fitzgerald of the New Castle County Chamber of Commerce argued that increasing wages on already struggling companies will hurt them, and that raising minimum wage will have an inflationary effect as companies raise prices to cover their costs.

Carrie Leishman of the Delaware Restaurant Association pointed out that nearby states raising their rates are doing it over six and eight years, not over the three between Jan. 1, 2022 and Jan.1, 2025.

Several legislators and public speakers said the pandemic is the just the latest excuse for people who don’t want to raise minimum wage.

“$9.25 is not enough for anyone to live in economic dignity,” said Rep. Larry Lambert, D-Brandywine Hundred. Delaware is ranked 25th in the nation for minimum wage, even though it’s the corporate capital of America, he said, sliding into an impassioned defense of the wage hike that would make a Southern Baptist preacher proud. Rep. Sherry Dorsey Walker, D-Wilmington South, later said it made her want to shout amen.