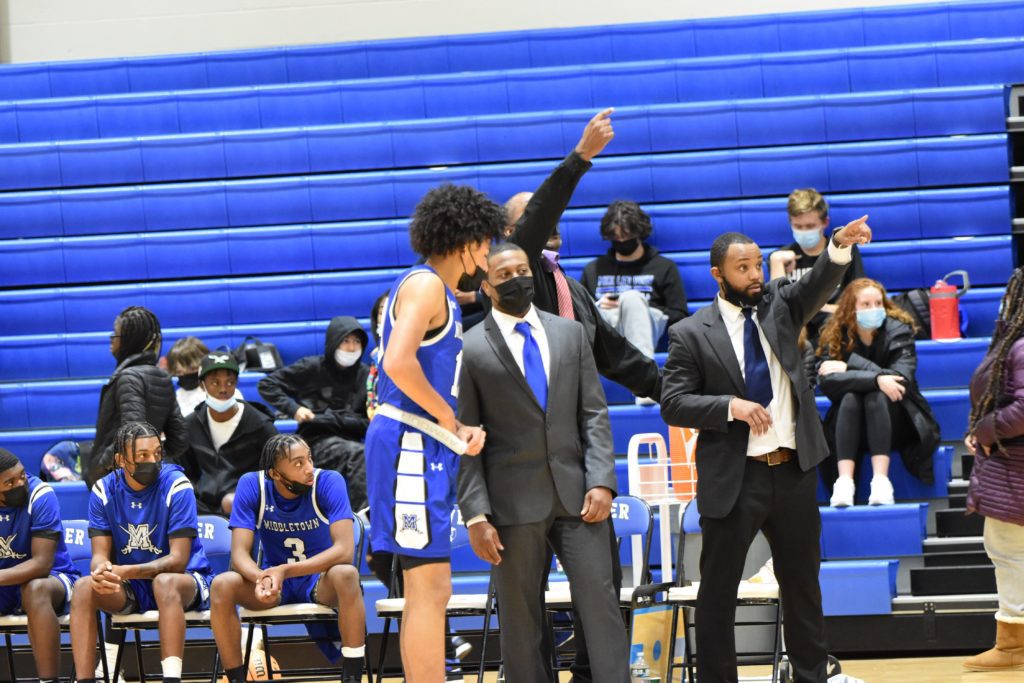 MILLTOWN —The game got off to a slow start in terms of scoring as defense and turnovers, combined with some shooting woes, was the story in the first quarter. Both teams came out slow but Middletown held a 10-8 lead after the first.

The offenses found their way in the second. Each team scored 16 points as the pace remained fast and the shooting followed suit. Middletown opened up with four straight to open the quarter before Prince DeWitt found Donovan Artis underneath for the Spartans’ initial basket of the second, but Ty’renne Hynson answered quickly with a three to extend the Cavaliers’ lead to 17-10.

White took a pass from Gavin Marks for the first of his three field goals in the second, and the Spartans turned up the defensive pressure to slow down the Middletown assault until field goals by James Baffone and White brought Saint Mark’s to within a pair at 20-18.

The Spartans would tie the game at 24 on a three from Chad Dohl. A turnover and foul, however, with just .08 left on the clock led to two free throws for McGhee and a Cavs halftime lead.

The Cavaliers pulled away a bit in the third after the Spartans hung close well into the quarter. The score was 32-30 Middletown after a shot by Matthew McDonald, but the Cavs finally pushed the lead to double figures on a Hynson three.

Fouls piled up for the Cavaliers, but the Spartans could not take advantage of their free throw opportunities. They made just three of eight in the third and seven of 17 in the second half.

The Spartans connected on two three-pointers in the fourth quarter, but Middletown was able to hold off a St Marks comeback. Amir Cunningham had five points in the fourth, including three of three from the free throw line.

Evan Sparks led the Cavaliers with 13 points. He was joined in double figures by Rogers (11), Hynson and McGhee added (10). Middletown improves to 1-2 and will play December 28 at 6:45 p.m. at the Governor’s Challenge at Wicomico Maryland High School.