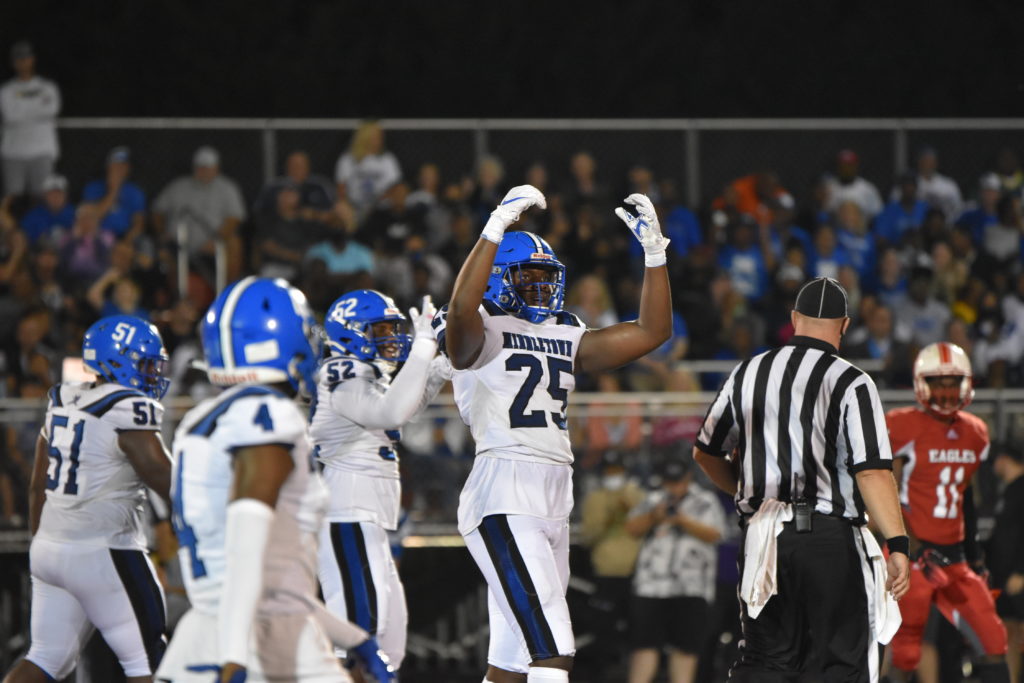 A much-anticipated battle of the top two ranked teams in the state lived up to it’s billing for three quarters Friday night. The 4th and deciding quarter belonged to the visiting Cavaliers in a 28-14 Harvest Bowl win at Smyrna.

Both teams have talented offenses and highly recruited quarterbacks but the defenses controlled the opening 12:00 of the game. With 1:22 left in the period, Smyrna sophomore Brandon West forced a fumble inside the Middletown ten yard line and the Eagles scored on a 4th and goal from 3 yards out on a sprint to the pylon by Yamir Knight. His older brother Wayne Knight led the way with a good block to seal the edge. That touchdown came on the second play of the 2nd quarter and put Smyrna up 6-0.

The Cavaliers would answer on a 17-play drive covering 6:20 culminating in a 16-yard TD pass from Braden Davis to ‘Rennie Hynson who broke two tackles on his way to the endzone. Tyla Walker, recruited from the girls soccer team, booted the extra point and the Cavs led 7-6.

It would take Smyrna about 3:00 to regain the lead. Cameron Edge found Devin Smith behind the secondary for a 52-yard pass play to the Middletown 11. Following a penalty, Edge made a great throw to the corner of the endzone catching Devin Demoe in stride for a 28 yard score. The conversion run was good and the Eagles were up 14-7.

Undaunted, Middletown received great field position in the final 2:00 thanks to Z-Aire Tart’s kickoff return to the Eagle 49. With :20 left in the half, Davis found Bryce Lemons in the endzone for 27 yards and the game was tied at 14.

The third quarter was scoreless but there were some interesting developments. The first came on a questionable spot with Smyrna completing a sideline pass on fourth down when Edge hit Demoe at the Cavalier 44 yard line and he was pushed back to the 46. That’s where the ball was spotted and the Cavs took over on downs. Middletown could not take advantage, also turning the ball over on downs at the Smyrna 33 yard line. Cavalier senior Kody Harris-Miller blocked a Wayne Knight punt giving his offense great field position at the Eagle 30. On 4th and goal at the 9, Eagle linebacker Dwayne Ratcliffe intercepted a pass returning the ball 26 yards to the Smyrna 31.

The Cavalier defense rose to the occasion by recording 4 second half sacks and holding Wayne Knight to just 2 yards rushing in the second half. The Middletown offense finally found some success running the ball in the 4th quarter as Michael Pearson scored 2 rushing touchdowns. The first came with 7:42 left in the game from 6 yards out, and the second was a 2-yard run with 2:06 left, basically sealing the victory.

Middletown out-gained Smyrna 349-156 in total yards to win the Harvest Bowl for the 3rd straight time under Head Coach Zach Blum. The 2-0 Cavaliers return to action next week against cross-town rival Appoquinimink. Smyrna at 1-2 has a short week as they prepare to host Caesar Rodney next Thursday.