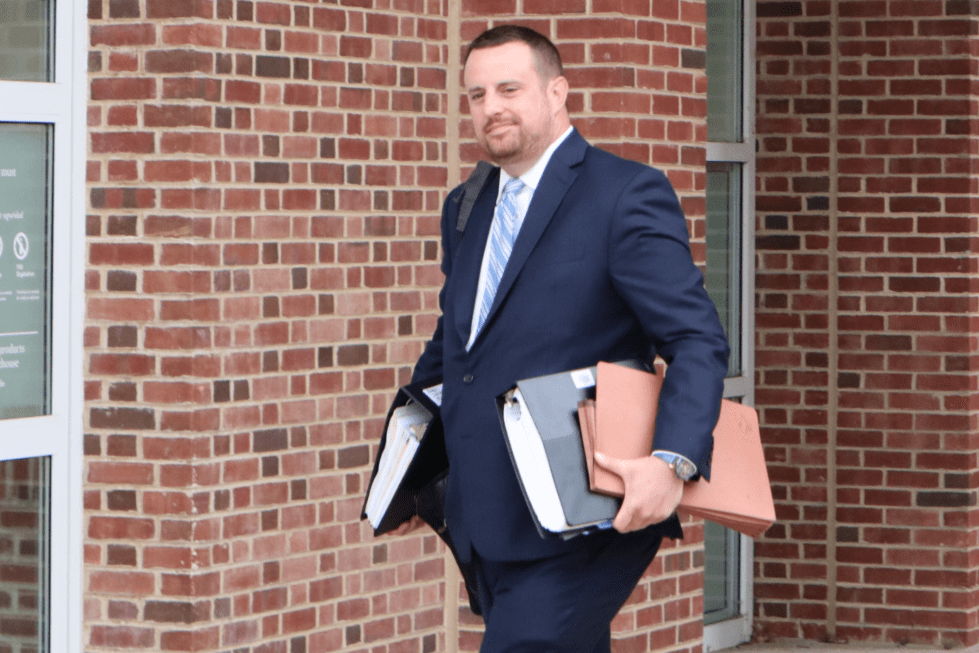 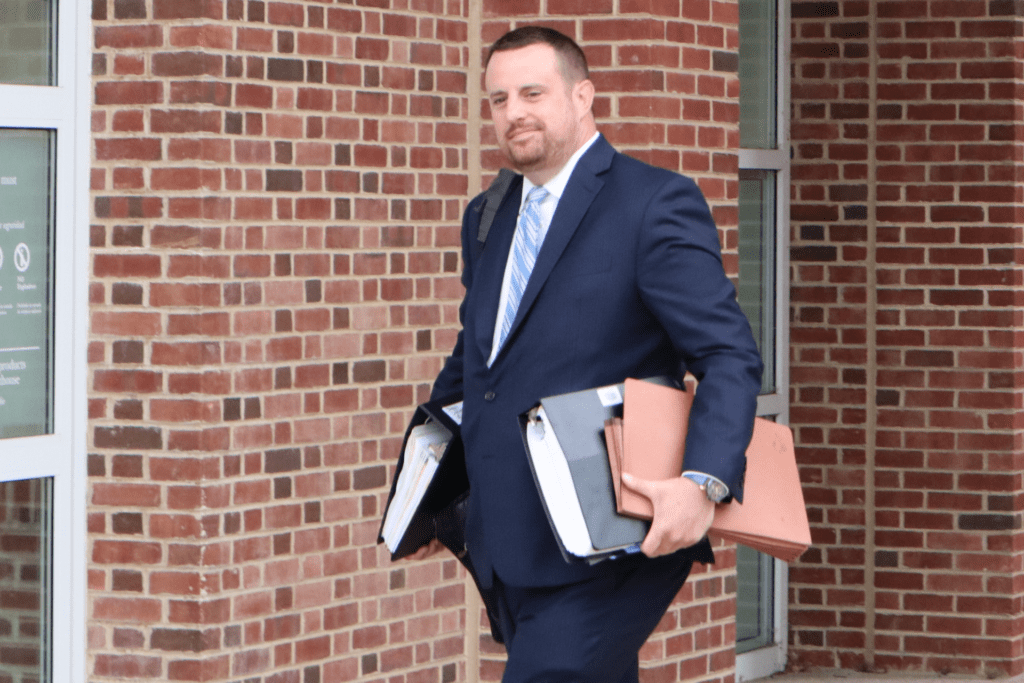 Mark Denney, director of the Division of Civil Rights and Public Trust at the Delaware Department of Justice and lead prosecutor in the state’s case against Auditor Kathy McGuiness. (Charlie Megginson/Delaware LIVE)

The Delaware Department of Justice on Monday responded to State Auditor Kathy McGuiness’ claims that her trial was unfair.

McGuiness asked the judge last week to overrule the jury and acquit her on each of the charges on which she was found guilty — or grant a new trial on those charges.

In prosecutors’ response to McGuiness’ motions, they said her trial was fair and pushed back against claims that the state committed Brady violations by withholding evidence that could have affected the jury’s decision.

McGuiness was found guilty on three misdemeanor charges, including official misconduct, structuring and conflict of interest.

She was acquitted on felony charges of theft and intimidation after a three-week trial that ended the day before the Fourth of July weekend.

“The Defendant claims, as she has throughout the case, that the State ‘with[held] material exculpatory and impeachment evidence’ in violation of its obligations as outlined in Brady v. Maryland and its progeny,” wrote lead prosecutor Mark Denney. “She is wrong.”

Denney said prosecutors “diligently searched” for evidence favorable to the defendant and provided its findings to McGuiness’ legal team.

“Nonsensically, the defense insists no search ever occurred,” he wrote.

In defense attorney Steve Wood’s motions to the court, he argued that by (allegedly) withholding evidence, the state “adversely affected the Defendant’s ability to prepare and present her case, including her ability to conduct necessary investigations.”

As a result, Wood said, “there is no question that the guilty verdicts in this case are not worthy of confidence.”

Denney said prosecutors provided materials to McGuiness’ team “in a functional and searchable format” in Dec. 2021 and March 2022 — more than two months before the start of her trial.

“Finally, virtually every piece of evidence offered by the State was public Record,” he wrote. McGuiness “is not entitled to a CliffsNotes version of the discovery – especially when so much of it is the Defendant’s own communications.”

McGuiness’ defense argued that the judge erroneously admitted inadmissible character evidence, allowed the prosecution to shift their theory on the structuring charge, and made inappropriate comments on state’s witnesses that may have influenced the jury.

But Denney said the judge actually excluded much of the evidence that would have been in the state’s favor to present to the jury.

Included in that list of evidence the judge did not allow:

“​​The Court has wide discretion to decide evidentiary matters,” Denney wrote. “Any claim of unfair trial based on the cumulative effect of the Court’s rulings overlooks those many decisions…”

Denney concluded his response by asking that McGuiness’ motions be denied. 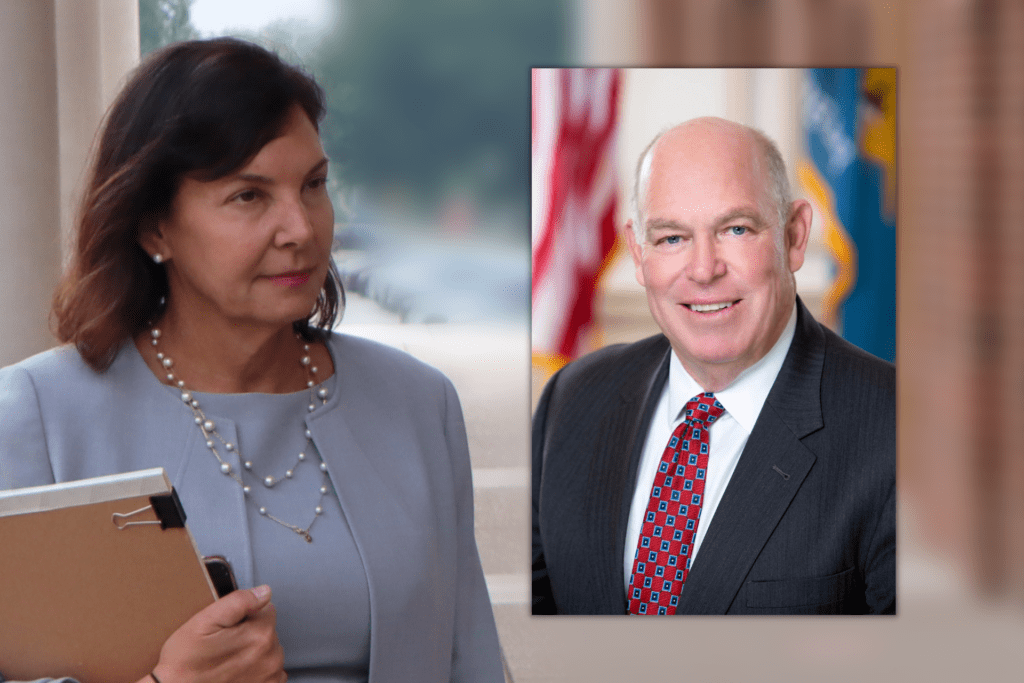 Speaker of the House Pete Schwartzkopf (right) will not call the House of Representatives back to Dover to vote on a Senate Resolution to begin the removal of Auditor Kathy McGuiness (left).

Also Monday, the Delaware Senate passed a resolution to begin a process Democratic leadership hoped would result in the removal of one of their own: State Auditor Kathleen McGuiness.

Every Republican voted against the measure, putting them in line with House Speaker Pete Schwartzkopf, D-Rehoboth, who said he has “no intention of calling the House into session to consider this resolution at this time.”

“This isn’t taking decisive action: it’s political theater,” Schwartzkopf said. “The Senate’s resolution would simply start a lengthy process to ultimately ask the governor to remove the state auditor from office – a request he’s not required to fulfill, and a request he’s indicated that he wouldn’t carry out at this time anyway.”

As noted above, the judge in the McGuiness trial has not yet entered the guilty verdict and has yet to rule on motions by McGuiness’ attorney to acquit her, something Republicans — and Schwartzkopf — said the Senate should have waited for before acting.

Days after the jury’s verdict, Carney said he wouldn’t use his Constitutional authority to independently remove McGuiness from office until the judge enters a conviction.

“The Auditor of Accounts has been found guilty by a jury of three misdemeanors,” Carney said in a press release. “The Delaware Supreme Court has made it clear that … the Governor has no power to act until after the entry of a judgment of conviction by the Superior Court.”

The press release went on to explain that while the governor believes McGuiness cannot do her job effectively under the circumstances, and while he understands that some in the General Assembly have called for her immediate removal from office, “it is the Governor’s responsibility under the law to await the final determination of the court and then to determine his constitutional obligations after the entry of judgment.”

“​​Any public official who engages in the actions that Auditor McGuiness was found guilty of by a jury is unfit for public office, but especially the state’s top financial watchdog,” Sokola said.

That’s why Senate Democratic leadership called on McGuiness to resign after the jury found her guilty, Sokola said.

“Once again, she did not heed those calls,” he said. “By refusing to take any accountability for her actions and by actively campaigning for reelection, the auditor has left this body with no choice.”

Republicans, however, didn’t think the choice was so clear.

“We don’t stand opposed because we believe [McGuiness] did nothing wrong,” said Sen. Brian Pettyjohn, R-Georgetown. “On the contrary, we stand opposed to the timing of this resolution because this individual — in the eyes of the law — is still innocent.”

Pettyjohn said the Republican Caucus wasn’t asking for an indefinite delay in the event McGuiness pursues an appeal, but that the Senate withhold action at least until the judge finalizes the verdict.

“Every person in our state is entitled to due process,” he said. “Soon, the richest man in the world will be involved in a court case here in Delaware. Our courts also hear from those who are the most destitute. Each of them and everyone in between is entitled to equal protection and due process under the law.”

He added that the Senate’s action Monday is a “not-so-gentle erosion of those bedrock principles.”

Pettyjohn moved to table the resolution until the judge enters a guilty verdict. The motion failed.

Sen. Colin Bonini, R-Dover, said he didn’t vote for McGuiness and doesn’t plan to in the next election, either.

“I don’t know her very well,” Bonini said. “But let me tell you one thing I do know about her: She was freely and fairly elected.”

Democrats will have an opportunity during the Sept. 13 primary election to vote McGuiness out of office, Bonini said.

If she wins that election, Delawareans will have yet another opportunity during the general election to decide whether she should get to keep her job.

“But we can’t live in a place where we use the tools of government against political opponents that we don’t like,” he said. “People in these chambers, by the way, have been charged with misdemeanors.”

“I did vote for Auditor McGuiness and I likely would have voted for her again, if she hadn’t been charged and subsequently found guilty of three misdemeanor charges involving her office,” Sturgeon said. “So this is not politically motivated.”

Sen. Sarah McBride, D-Wilmington, called Monday “a sad day, but sadly it is a necessary day.”

“The foundation of all of the work that we do is built on public trust,” McBride said. “And sadly, with both the indictment and the guilty verdict by a jury, the public trust has been broken.”

McBride said the Senate has no obligation to wait for the judge to enter the guilty verdict to take action against McGuiness. She pointed to numerous examples in other states and at the federal level where public officials were removed from office or resigned prior to a conviction.

But seeking to remove McGuiness from office only for the judge to grant a new trial or acquit her altogether is a risk too big for Sen. Dave Lawson, R-Marydel.

“We need to slow down, rein it in a little bit, and quit being premature,” Lawson said. “Because if this is thrown out by the court, if she’s found not guilty, we’re gonna look less than wise and I’ll leave it at that.”

The provision that allows the governor to unilaterally remove McGuiness once the conviction is entered can be found in Article XV, Section 6 of the Delaware Constitution, which says:

“All public officers shall hold their offices on condition that they behave themselves well. The Governor shall remove from office any public officer convicted of misbehavior in office or of any infamous crime.”

“By his own words, the Speaker is choosing a different course of action – one that both abdicates the Legislature’s Constitutional responsibility to a wholly separate branch of government and also allows the Auditor to continue collecting a taxpayer-funded paycheck while she awaits her sentencing,” the statement reads.

Schwartzkopf said proceeding with the Senate’s preferred method of action would do more harm than good.

“It’s important that the public understand that what the Senate is proposing is to start a process where the General Assembly would need to draft rules, give 10 days’ notice and then hold what amounts to a trial – where the auditor can be represented by legal counsel, call witnesses and present evidence,” Schwartzkopf said.