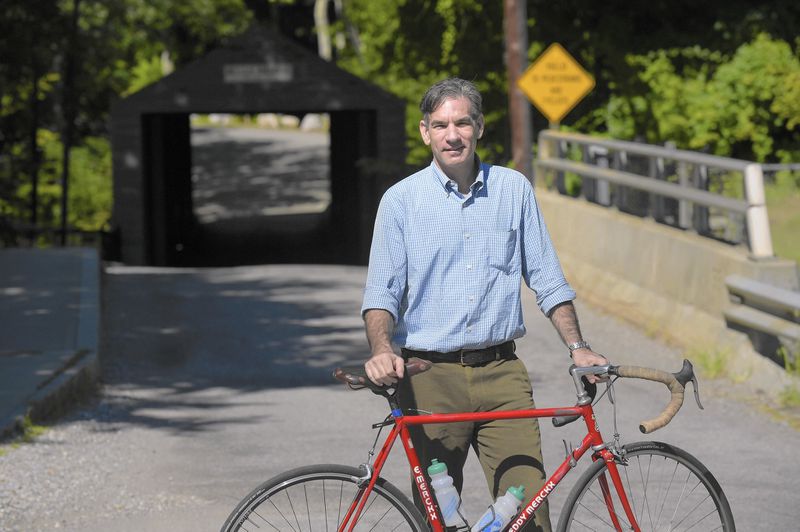 A Connecticut man is traveling nearly 700 miles by bicycle and kayak to retrace the routes of George Washington and France’s Jean-Baptiste Donatien de Vimeur, Comte de Rochambeau during the Revolutionary War.

Sal Lilienthal is a history buff, author, and owner of Bicycle Tour Co. in Kent, Connecticut.

His voyage will bring him through northern Delaware Sunday, Aug. 22. Before arriving in Delaware, Lilienthal will bike and kayak through Connecticut, New York, New Jersey, and Pennsylvania.

Speaking through a headset attached to his helmet, Lilienthal talked about his trip while biking through Southington, Connecticut.

“We’re riding this route for a number of reasons,” Lilienthal said. “The first is to promote a healthy lifestyle, and we’re also trying to celebrate the 240th anniversary of the march.”

He began his tour on Saturday by kayaking 12 miles through the Narragansett Bay from Providence, Rhode Island, to Bristol, Rhode Island. This leg of his journey was reminiscent of France’s Bourbonnais, Royal Deux-Ponts, Soissonnois, and Saintonge regiments sailing those waters as they traveled to New York to join with the Continental Army.

New York City had been their planned target. However, the generals recognized the need for a naval component in the attack. 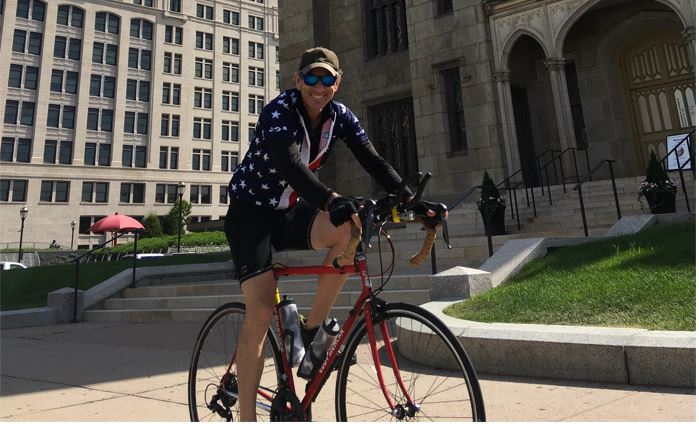 Hoping for an attack on the British forces occupying New York City, the generals opted instead to head for Gen. Charles Cornwallis’s British forces near the Chesapeake Bay, where they felt they would have a better chance of success.

Their intelligence indicated that Cornwallis’s forces would be occupying Yorktown, Virginia, so Washington and Rochambeau marched their companies there in secret.

Their siege would be successful, resulting in the surrender of Cornwallis in Yorktown. The victory prompted the British government to negotiate an end to the Revolutionary War.

Washington and Rochambeau’s march was “the decisive prelude to the victory at Yorktown which won Americans their freedom,” Lilienthal said.

“All my grandparents were immigrants and they loved our country and they really understood what freedom was all about,” Lilienthal said. “The French and American soldiers that fought for this military campaign basically set the stage for the freedom that we have today, which we often take for granted.”

Lilienthal trained vigorously in preparation for his 700-mile voyage.

“I’ve been training for quite a while,” Lilienthal said. “I did a nine-day training camp a couple of weeks ago that was 482 miles cycling, and 18 miles kayaking. The biggest kayak section was in Narragansett Bay — it was about 16 miles, but I wanted to train a little extra, just in case I had an unfavorable tide and a headwind, but I knew I could do it.”

On Sunday,  Lilienthal will arrive in Brandywine Village in Wilmington where he will offer a bicycle clinic for inner-city children.

“One of the cool things about Brandywine Village is there are murals painted at the Brandywine Village Plaza of the soldiers marching,” Lilienthal said. “In addition to promoting a healthy lifestyle and celebrating the march’s anniversary, we’re also trying to include diversity, equity and inclusion initiatives.”

After the clinic, Lilienthal will bike to the Hale Byrnes House in Stanton. An event to facilitate his arrival will be hosted at the house and will feature a talk with Lilienthal and a light supper.

After departing Stanton, Lilienthal will bike to Perryville, Maryland by bicycle, then kayak across the Susquehanna River to Harve de Grace, Maryland.

From there, he will bike through Baltimore, Annapolis, Mount Vernon, Hanover, and finally Yorktown. He will end his trek traveling by car to Boston, Massachusetts, where he will embark on a four-mile kayak paddle through Boston Harbor.

Lilienthal’s route can be viewed at this link.