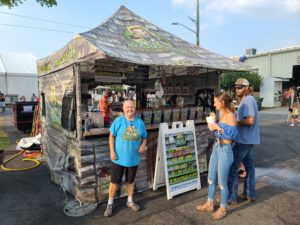 Kelly Elliot, left, started her Mama Jugs tea tent after realizing it was hard for fairgoers to find beverages. Photo by Bryan Shupe

Hundreds of thousands of Delawareans descend on tiny Harrington each year for the Delaware State Fair, but those who travel the furthest often are the food vendors.

The cuisine choices range from ordinary to unusual to downright weird.

Only at the state fair might one decide what time is right to munch on an octopus taco, a fried spaghetti stick or a glazed donut cheeseburger. And whether to try them back to back to back.

Delaware LIVE News visited the fair Tuesday to try it all, but discovered the real character lies not in the food being served, but in the people serving it.

She has been serving flavored iced tea at the Delaware State Fair for four years, although she’s been in business throughout the country for more than a decade.

Fun flavors are to be expected at the fair, but Mama Jugs tea comes with an even more exotic premise: free refills.

Tuesday was a slow day, Elliott said. They would likely sell around 500 jugs of tea at each of her two locations on that early week day. During the busy weekend, however, Mama Jugs sold more than 4,500 jugs of tea in just one day.

“On Saturday we opened up at 11 in the morning and we never cleared our line until 11:30 at night,” Elliot said. “Year over year we’ve increased sales, with the exception of the pandemic.”

Elliot said she was inspired to start her business after visiting fairs around the country where customers were priced out of purchasing refreshing beverages.

The company has a strong Florida season from Jan. 7 through March 31. Then it breaks down and hits the fair circuit.

Elliot spends a month in the Georgia mountains visiting county fairs, then three months in Texas before she makes her way northeast to fairs like the one in Delaware.

The demand for her tea has become high enough that Mama Jugs has begun selling online so that fans can enjoy their favorites year-round. 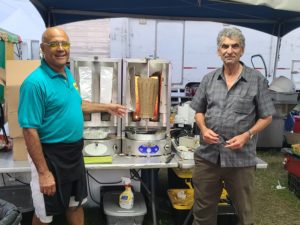 Dino Constantinou, right, has been serving gyros at the Delaware State Fair for almost 25 years.

Another familiar traveling food vendor is Dino Constantinou, who has been serving gyros at the Delaware State Fair for nearly 25 years alongside his wife, son and brother.

Constantinou grew up on the Greek island of Cyprus before moving to New York City, where he has spent his whole life cooking Greek cuisine.

For the past two decades, Constantinou has traveled all along the Eastern Seaboard sharing his culinary skill with fairgoers.

“It’s one of my favorite events,” Constantinou said. “You have to take into consideration that before the pandemic I did fairs week after week in New York, New Jersey, Connecticut, Rhode Island, Massachusetts and Delaware.”

Constantinou praised Delaware for being the one of the only fairs in the nation to not cancel their event last year. However, he said, even with the elimination of mask and social distancing mandates, he is struggling to return to normal business.

“The thing that happened this year is that there are no people who want to work,” Constantinou said. “Probably the reason is that the government is giving a lot of money out to people and they’d rather take that money than come and work.”

Constantinou said his food stand is usually staffed by eight people, but this year only five were willing to work, most of whom are in his immediate family.

That won’t stop him from chowing around.

“The food vendors here are my competitors, but let me tell you, you can find some of the finest food vendors in the whole country right here,” Constantinou said. “Of course I love my food, but right now I can’t wait to go eat from this person and this person, because they all have very, very good food.”

The Delaware State Fair fair continues through Saturday and will feature musical artists Hardy, 38 Special and Zach Williams on Wednesday, Friday and Saturday, respectively. The annual harness race will take place on Thursday. Admission costs $9.50 for adults and $4.50 for children under the age of 12.