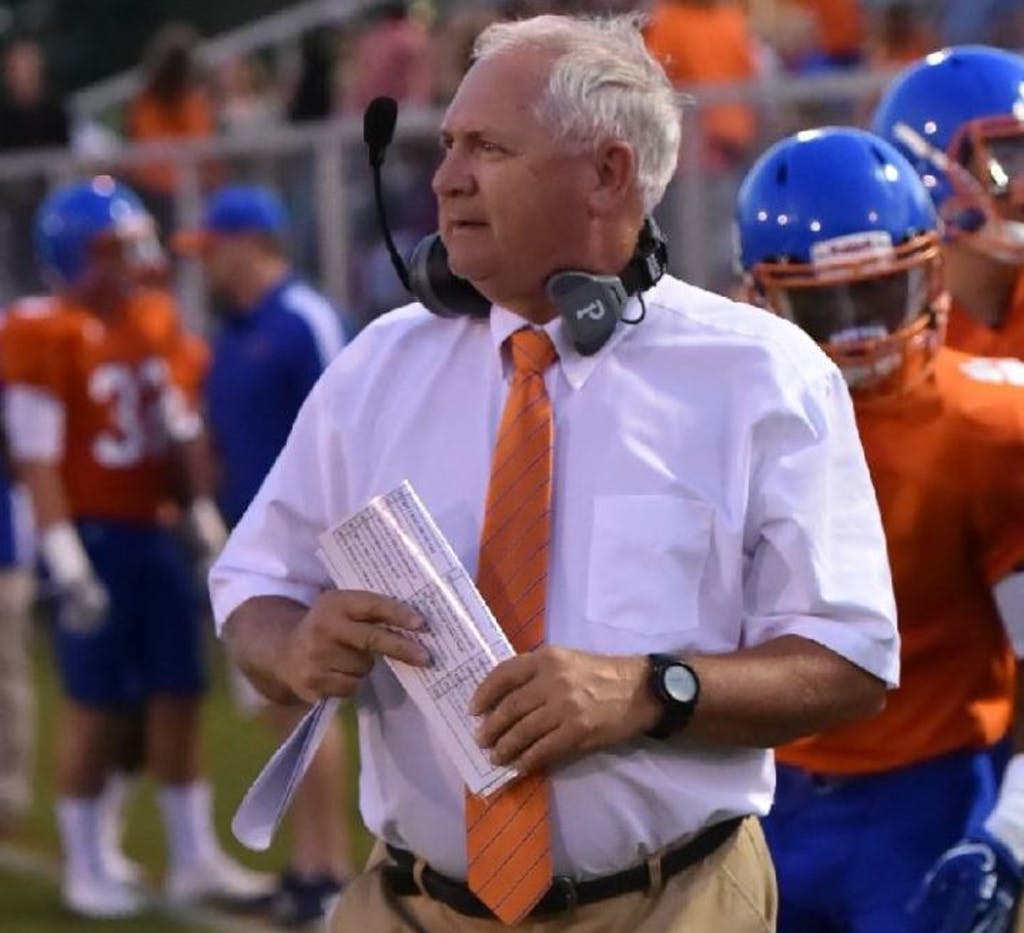 If you cut 65-year-old David Hearn with a knife, there’s a better than average chance he’ll bleed blue and orange.

And that’s not going to stop just because retirement has come calling – once a Wildcat, always a Wildcat!

For three decades, Hearn has been the face of the Delmar High School athletic program as both the baseball coach and the school’s athletic director. But it’s his presence on the football field that has really made him synonymous with the town he’s called home for most of his life.

On Friday, Feb. 26, Hearn walked out of Delmar High School for the final time as athletic director. It’s a job he had held since 1991 and through a record five football state championships for the school he graduated from in 1974.

“I’ve never done anything but sports in my life. I’ve never known anything different, so I don’t really know what I’m going to be doing next,” says the long-time coach. “I’ve always enjoyed the big crowds coming out on Friday nights and the fire truck escorts coming home. And now I’m beginning to realize that might all be over.”

Maybe, but then again maybe not.

While Hearn has officially stepped down as athletic director, he’s still keeping open the possibility of returning for at least one more season as head football coach.

With the growing possibility of COVID-19 restrictions being eased before football practice begins in late summer, one more “normal” season has a certain amount of appeal for the five-time state champion head coach.

“All the fun we’ve had over the years was really snatched away from us last year for a number of reasons, especially coronavirus,” admits Hearn. “At least we had a season, but it was challenging every step of the way. Win or lose, I may come back so I can have one more normal season.”

Under Hearn’s guidance, the Delmar Wildcats have captured Delaware Division II State Football Titles in 2000, 2001, 2002, 2009 and 2017, all but two of the seven that the school has captured in its history.

The first three titles came as part of an unprecedented 35-game win streak for the Wildcats, something almost heard of for one of Delaware’s smallest school districts.

That initial state title in 2000, a thrilling 41-34 victory over Saint Elizabeth at Caesar Rodney High School in Dover, was something special.

“It was really exciting because at that time the fans could still come onto the field, and it was a mob scene when the game ended,” remembers Hearn. “It was great to see our kids celebrating. And for me personally, I could finally take a deep breath and feel satisfied, at least briefly.”

Delmar has always been wildly supportive of its sports teams and was the first town in southern Delaware to begin the tradition of welcoming their athletes home via a fire department escort and with residents cheering the kids from the sidelines.

It’s a special feeling and one that Hearn has enjoyed both as a player in the 1970s and as a coach for the last 30 years in his beloved hometown.

“That’s something that’s really hard to describe to someone who hasn’t been on that bus, but the kids’ eyes get really wide and they truly do feel like the heroes of Delmar for the day,” he says. “It’s all fun to watch, but we also tell them not to forget who they are and to remember to thank the right people for their success.”

Hearn has coached two players who were later drafted into the National Football League. But if you ask him what he’s most proud of, what his legacy is at his alma mater, he’s quick to mention the many coaches he’s worked with over the last three decades.

He remembers the late-night arguments, the long days going over scouting reports and video footage and all of the fun he’s had on both the practice field and on game days.

But he simply wants to be remembered as a “nice guy who always listened to other people’s ideas.”

This is not the ending for the legendary southern Delaware football coach, simply a new chapter in his long and successful life and athletic career.

“I always wanted to try things my way, that’s why I came back to Delmar to coach,” he says. “We’ve been really lucky over the years to have great coaches and good crops of athletes. Everyone I’ve worked with has just made our athletic program that much better.

“There are a lot of unknowns for me right now, but I’m sure I’ll have many more things to look forward to.”