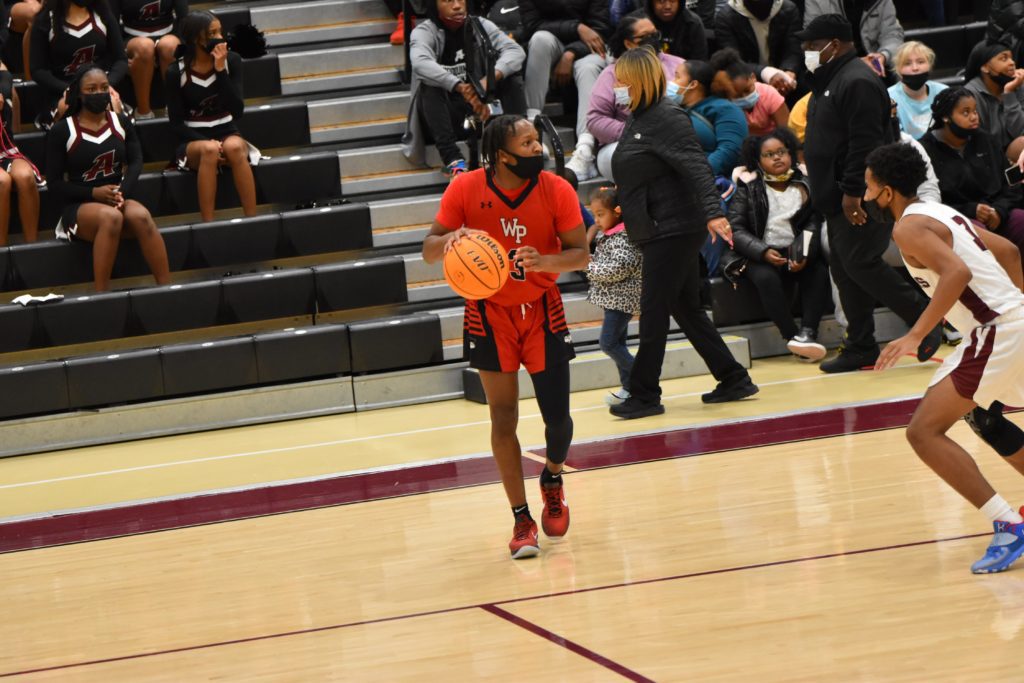 #6 William Penn Colonials boys basketball team travelled to Middletown to face off with the #8 Appoquinimink Jaguars in a Blue Hen Conference matchup of two top ranked teams Tuesday night. Both teams came into the competition sporting 1-0 records after their first games.

William Penn controlled the lead for all of the 1st half. They led 14-10 after the first quarter of play then took their largest lead of the half in the second quarter when Penn’s superstar Gabe Valmond hit his second three pointer of the game giving the Colonials a 27-16 lead with 3:02 left in the second quarter. William Penn would take a 29-20 lead into the half.

In the third quarter the Jaguars threatened to take the lead from the Colonials, but couldn’t take their first lead of the game since they led 3-2 in the beginning of the game. Down 36-31 late in the quarter Owen Parrish took a pass from Haji Bell deep behind the three point line, but without hesitation he buried the deep 3 pointer. Moments later after a missed shot by Penn Appo came right back down the floor Bell pulled up for a jumper in the lane that bounced off the rim, but Nathaniel Burlew was there for a one handed tip to put the ball in tying the game at 36 all. Penn did not relinquish the lead though scoring 5 straight points to end the quarter up 41-36.

Appo used the momentum from the third quarter to finally take the lead from the colonials who controlled the lead for majority of the game. With 6 minutes left in the game Christian Barksdale hit a 3 pointer from the right wing giving the Jaguars a 44-43 lead. After going back and forth for a few minutes Appo was able to maintain the lead for the majority of the fourth quarter with their largest lead of the game 53-48 with 2:43 left in the game.

With a little over a minute left in the game Appo led 53-50. However, that lead wouldn’t last long. Penn regained possession after a missed 3 pointer from Appo and with the game on the line they would look to their leader. Valmond got the ball dribbled through his legs a couple times then stepped back to drain a highly contested 3 pointer to tie the game at 53. After a missed 3 point attempt from Appo’s Bell Valmond got the ball back again.

Benjamin Vohm came up to set a screen for Gabe, who dribbled around to the top of the key giving him a wide open 3 point attempt, but he missed the shot. The Jaguars grabbed the rebound and took off in transition back down the court as Jaeden Ysaguirre looked up court hitting a sprinting Parrish out ahead of the Colonials defense for a layup taking a 55-53 lead with 14 seconds left in the game. William Penn then called a timeout to set up their final play of the game.

Out of the time out Penn ran a play to get Valmond the ball. They set a couple screens getting him the ball at about half court. He fought through one defender and dribbled a couple times to get open, but he found another Jaguars defender in his face he then pulled up for a 3 pointer from NBA range burying it with 4 seconds left in the game which proved to be the game winner. Appoquinimink had an opportunity but Parrish’s shot would bounce out giving the Colonials the win.

Valmond would lead all scorers in the game with 25 points adding 4 assists and 3 rebounds. He was named our First State Orthopedics player of the game. Appoquinimink was led by Eric Mathenge who scored 15 points for the Jaguars.