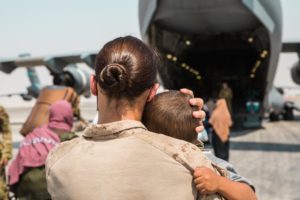 Delaware is set to welcome 30 refugees from Afghanistan in the coming months.

All but four states — Hawaii, South Dakota, West Virginia and Wyoming — will be accepting refugees from Afghanistan. Of the states resettling refugees, only Alabama and Mississippi are accepting less than Delaware with 10 each.

Approximately 37,000 Afghan evacuees are expected to resettle in nearly 200 communities across the United States during the first phase.

On Sept. 20, the Biden administration announced that it is seeking to increase the refugee-admissions cap to 125,000 for fiscal year 2022. That amount includes refugees from other parts of the world too, not just Afghanistan.

As the state’s sole refugee resettlement agency, Jewish Family Services has resettled several families this year from other parts of the world, including Vietnam, Rwanda, Jordan and Sudan.

The 30 Afghans expected to come to Delaware are in addition to the 50 refugees JFS was already planning to receive throughout the year from other countries.

The group announced on Sept. 20 that it has been assigned its first Afghan case, which includes a single mother and her three sons, ages 16, 13 and 8. That family has not arrived in Delaware yet, pending a vaccination waiting period.

The majority of Afghan refugees are currently being housed on bases around the country, according to Rosi Crosby, chief strategy officer for JFS Delaware.

Before being resettled, refugees receive an array of vaccinations, including the COVID-19 vaccine. They also receive their identifications and work permits.

Crosby said depending on family sizes, the 30 refugees being resettled in Delaware will likely represent about 10 families.

Early next year, JFS, state and local partners expect to reassess the situation to determine the state’s capacity to welcome additional families.

Crosby said refugees in Delaware will have the same access to government services as those in larger cities and states.

Once federal funds are released to the states to assist with resettlement, JFS will engage in a process to ensure refugees have equal access to the services that they provide for other refugees, including medical benefits and SNAP food assistance.

In the meantime, “Afghan families will be cared for by JFS, private donors, private congregations, private families,” Crosby said. “We’re coming together as a collaboration to ensure that they have all the things that they need.”

She said JFS is working with groups like the Delaware State Housing Authority and the Association of Realtors to find affordable housing options in all three counties.

Many of the Afghan refugees arriving in the United States still have family and friends in their home country.

“There’s absolutely a concern by all families who are speaking out that the families that they’ve left behind are at risk,” Crosby said. “At the same time, we’ve heard harrowing and wonderful stories of people who are speaking out loudly and clearly about their own personal experience so that they can help others.”

The group offers refugees assurance that their identities will be kept confidential to protect their families in Afghanistan and out of respect for the trauma they’ve faced, she said.

“Our first and most important priority is to help alleviate that trauma by providing them safe, affordable housing, begin to put the children into school, provide intensive case management and therapy,” Crosby said. “Those are our priorities for any refugee family, particularly those from Afghanistan who have literally fled and experienced things in the past few months.”

Delawareans who want to support incoming refugees can visit the JFS website where they can learn about volunteer opportunities and donate to the Refugee Integration Support Effort (RISE).